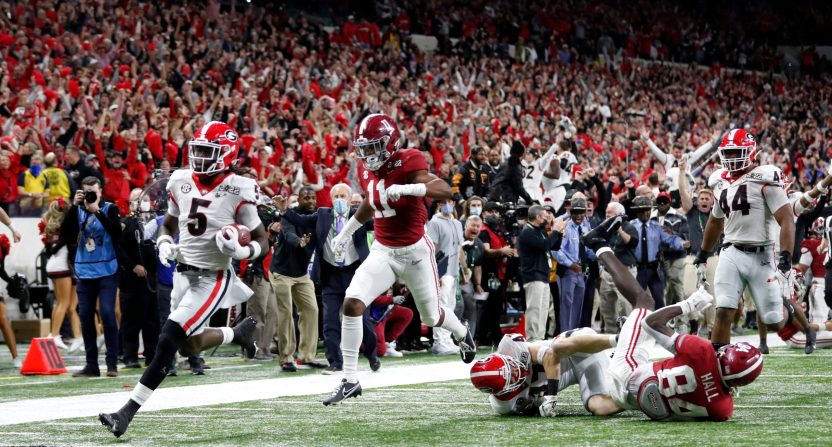 One of the long-established complaints about sports events from those who live in the Eastern Time Zone is about late weeknight kickoffs. There’s a difficult balancing act when trying to attract viewers from Eastern Time to Pacific Time (and beyond, but the concerns of those in Hawaii usually aren’t given much consideration by network executives), as an earlier kick retains more Eastern audience but loses the  Pacific audience that isn’t at home yet after in-person work. And with the 2023 College Football Playoff national championship game, that balance is now shifting in favor of the Eastern audience.

The general consensus has usually been for starts at 8 p.m. ET (5 p.m. PT) or later, as that means that the Pacific audience that works in-person has at least a chance of being home for most of the game. For example, ESPN’s Monday Night Football usually kicks at 8:15 p.m. ET (which will jump to 8:30 p.m. ET next week for the ABC Minnesota Vikings–Philadelphia Eagles game, although there’s a 7:15 p.m. ET start for the Buffalo Bills–Tennessee Titans game on ESPN). Some games have gone even later, with the NBA Finals often starting at 9 p.m. ET on weeknights.

As Jason Clinkscales explored at AA earlier this summer, though, that league’s really-late approach takes criticism of its own, especially in comparison to the NHL’s 8 p.m. ET Stanley Cup Final starts. And ESPN is now going much earlier for the CFP national title game, moving it to a 7:30 p.m. ET kick (from the 8:15 p.m. ET it was at last year):

(Update: ESPN has clarified this is the start of the title game’s telecast window, rather than the kickoff itself)

This is particularly interesting with this year’s title game being played at SoFi Stadium in Inglewood, CA (outside Los Angeles proper), so in the Pacific time zone. That means the game is kicking off at 4:30 p.m. local, which seems not ideal for those attending in person. Granted, a 5:15 p.m. kick itself was still going to require that most hoping to attend take at least the afternoon off, especially with L.A. traffic, but a 4:30 p.m. one moves up the get-to-the-stadium time even further. So it’s reasonable to assume this move was made with an eye to the national TV audience rather than anything with the local host, and an ESPN source confirmed that to AA’s Ben Koo, saying the hope here is to improve TV ratings.

The CFP ratings themselves have been the subject of some debate recently. As we discussed earlier this year, the ratings for the 2022 title game (Georgia‘s 33-18 win over Alabama, seen above) were a significant jump over 2021, but that was a pandemic-altered season. They were still the second-lowest since the start of the current playoff in 2015, and since every title game (including the previous BCS format) going back to 2005. So there’s some incentive to try things to improve those ratings, and there’s certainly an argument that an earlier start might aid the overall audience if the title game is a blowout (peak audience before the final moments) rather than one in question until the last moment. But we’ll see how this move works out for ESPN, and if this is a permanent change or not. And we’ll also see how it works out in terms of the discussions of upcoming playoff rights.