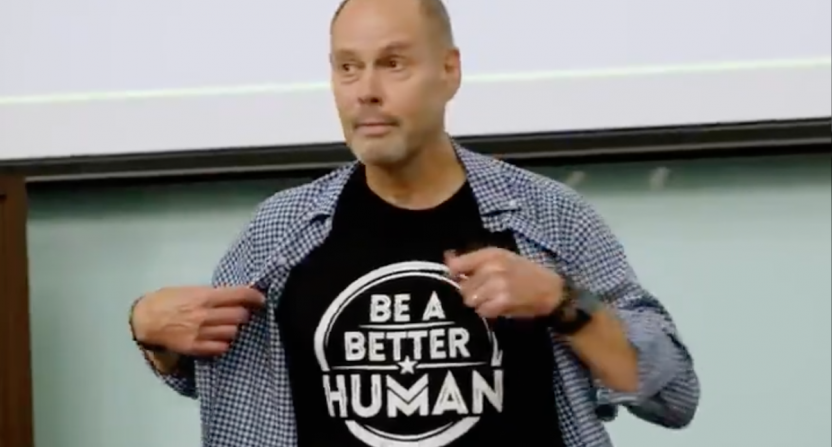 At first glance, Turner Sports broadcaster Ernie Johnson might appear to be an unconventional choice to speak to the University of Alabama football team. But head coach Nick Saban thought Johnson had a worthy, important message to share with those young players, as you’ll see with clips from the speech.

As Johnson said himself, it was never a question as to whether or not he’d accept Saban’s invitation.

“When Nick Saban asks if you would come and speak to his football team, ‘yes’ and ‘no’ are not the answers,” Johnson said.  “‘What time’ is the answer.”

The Alabama football program posted clips of Johnson’s inspiring, touching address to Twitter. His message — that there is “value at every position” and don’t be afraid to go “unscripted” in your life — is worth listening to for everyone. Give it a look:

The Inside the NBA host first explained the importance of everyone knowing their role on a team. The successful studio show works because neither Charles Barkley, Kenny Smith, or Shaquille O’Neal try to make it about themselves. Nor does Johnson as the host.

“Nobody cares what I think about a basketball game,” he said. “I’m just trying to get us from Point A to Point B to Point C, and I’m trying to make these guys shine. It’s about knowing your role.”

Johnson then shared how he learned his most important lessons from raising his son, Michael. When Johnson’s wife, Cheryl, suggested adopting a Romanian orphan with special needs, that wasn’t following the “script” of a normal life. But they raised a son who, despite having muscular dystrophy, went on to be invited onto his high school basketball team.

The coach wanted Michael on the team to show how important it was to give maximum effort and to have a heart for others. He saw the value Michael could provide, despite his condition. And on Senior Night, Michael’s classmates showed they realized his value as well, making the gesture for “Love you, too” in sign language.