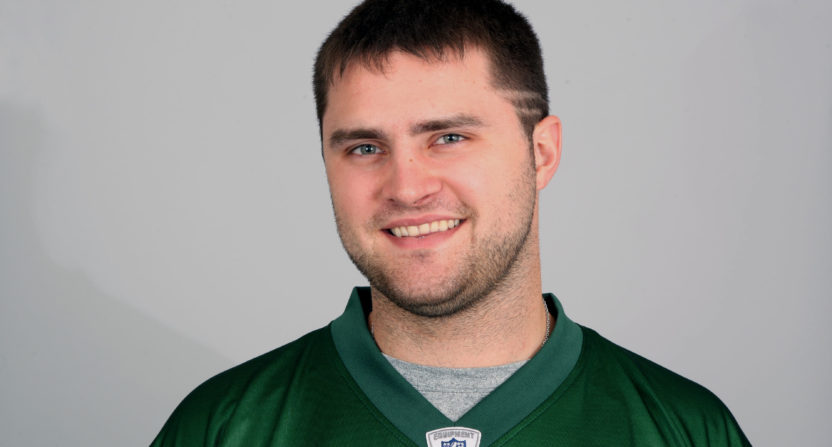 Erik Ainge, a former Tennessee Volunteers quarterback and current Knoxville radio host, decided Wednesday to reveal a direct-message conversation he had with former Tennessee and current Florida Atlantic head coach Lane Kiffin. But that didn’t turn out as well for him as he might have expected.

Ainge was a Volunteers’ quarterback from 2004-2007 before spending three years in the NFL with the New York Jets (he’s seen with them in 2010 above) and then later embracing a media career, starting a radio show (initially called “Morning Wood,” then changed to “The Erik Ainge Show”) on 1180 Tennessee Sports Radio in 2011, joining Rocky Top Insider in December 2015 and WNML this January.

Kiffin coached Tennessee in 2009 before suddenly leaving for the USC job in January 2010, and he’s popped up in some mentions again amidst the craziness of the Volunteers’ ongoing coaching search (the 9-3 overall mark and 8-0 conference mark he put up at Florida Atlantic this year didn’t hurt, either), but there are many in Knoxville who still don’t like him. Ainge is in that camp, and that led to him posting a DM conversation with Kiffin on Twitter Wednesday:

I don’t want him. He doesn’t want to be back here either. Kiffin is not the answer. I promise. See our convo. No. Thanks. Lane. pic.twitter.com/HLjYDQ13s4

So, Ainge decided to insult Kiffin via direct message, then post the screenshot of Kiffin’s comeback and Kiffin saying he hadn’t claimed he wanted to return to Tennessee as some form of anti-Kiffin proof? That’s certainly…a decision. And it didn’t go well at all for Ainge:

Why did you post this? he just owned you so hard.

Does Ainge not realize that he's the one who looks like an idiot here?

This is really embarrassing.

Not just for Erik either. Generations of Ainges will carry the shame of this tweet.

Good Lord Erik. What the heck is wrong with you? Lane is right that was totally unprofessional. I would question your judgment to even post that… Makes you look really bad.

Since you wanna be childish, thought Elmo could help you understand WHEN TO STOP! pic.twitter.com/SgohGJ9fsV

Dude you walked in to that one. You don’t want him as coach because he made you look like a child and cowered when backed in to a corner and made you say “uncle”. Why even post this? We’re you drunk?

Oddly enough, Ainge declared himself a candidate for the Tennessee job days earlier:

I am officially putting my name in the hat 4 hire. I’ve never been so…confused & angry (that’s saying something, I’ve been hit in the head a lot) Any role is fine. I’m 100% serious!

Retweet if you would rather have the Laine Train than Erik Ainge https://t.co/LEzyYl9qHq