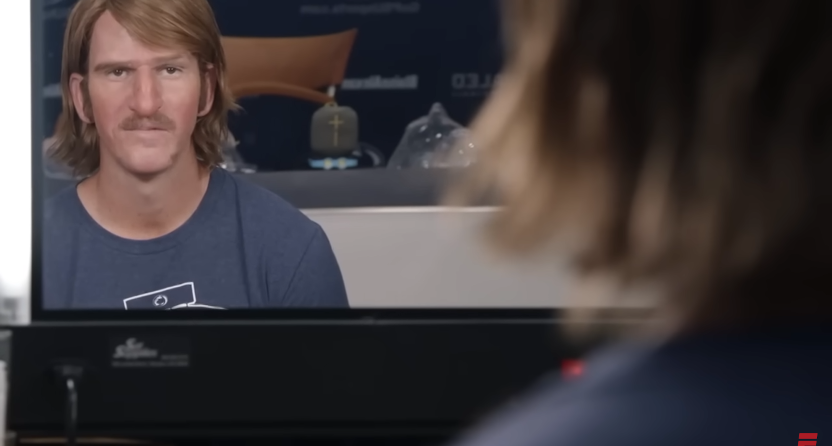 One of the more remarkable pieces of football content in a while was Eli Manning going “undercover” as “Chad Powers” at a walk-on tryout at Penn State. It’s part of a full Eli’s Places episode premiering on ESPN+ Wednesday, but the network released significant clips of that Monday, including the 15-minute clip below:

One key question with that clip was how many Nittany Lions players and coaches seen there were aware of what was going on.  Manning told Ryan Glasspiegel of The New York Post that to his knowledge, only Penn State head coach James Franklin was fully aware initially, but offensive analyst Danny O’Brien (a former Wisconsin, Maryland, and CFL quarterback and current CFL assistant coach) figured out something was up from Manning’s communications with receivers:

“I wanted to see if the coaches would be interested in me,” Manning told The Post on Monday. “Head coach James Franklin was in on it, but didn’t really tell any of the other coaches.”

…“By the end of it, [O’Brien] knew something was going on, just because of the way I looked, and how I was telling receivers what routes to run and how to run them — and I was talking some football lingo that I shouldn’t know, but knew coaches would know. I’m sure they’re not getting what ‘read’ many walk-ons are working on,” Manning said.

That piece is also fascinating for Manning’s comments on his ad-libbed stories (“it was just trying to be more outrageous every time I said something”), the wig he wore and how it was pinned so tight he had to remove pins before the eventual reveal of taking it off, and, in particular, his remarks on the non-throwing physical drills (which he only found out about when he got there) posing the most concern for him.

“I knew I could still throw — it’s like riding a bike, and you never forget how to throw a football,” Manning said. “But it wasn’t really until that day that I was told I’d have to run a 40, do a 5-10-5, do a broad jump, triple broad jump. My No. 1 concern of that was don’t pull a hamstring. It doesn’t matter what I run, the slower the time the better really.”

Fortunately, Manning escaped the tryout without any injuries. And that’s pretty amazing that they pulled this off in a way that most of the people at that tryout didn’t catch on at first. Apparently Manning can pull off a “How do you do, fellow kids?” without too many problems, especially with a wig and a mustache.

And this was a very clever idea for Eli’s Places, and a way to generate some buzz about the show. Manning told Glasspiegel much of the credit there is due to producers Tim Rumpff and Steve Menzel from NFL Films. We’ll see what else he and they have in store for the show going forward.