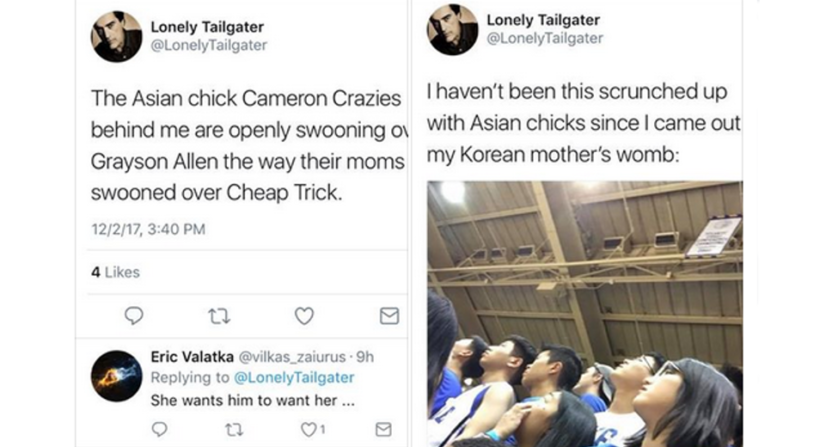 There have been some weird stories about people posing as media members over the years, from the guy who created a fake newspaper to gain Atlanta Braves’ credentials to people photoshopping credentials to sneak into events from the NBA Finals to UFC 205. With that said, though, the story about John Stansberry’s behavior at a Duke basketball game goes to a new level.

Claire Ballentine of The Chronicle (Duke’s student newspaper) reported this week that first-year student Greta Chen and her friends were standing behind Stansberry’s seat in the media section at a Dec. 2 game against South Dakota and saw him tweeting photos of them with offensive captions about their race under his @LonelyTailgater handle. They reported him to Twitter, and Chen then posted about this on Facebook, leading to a response through the student government and the athletics department that Stansberry would be banned from all future games. His Twitter account has since been deleted, but full screengrabs of the tweets can be seen in Chen’s Facebook post here.

Here’s a brief summary from the Chronicle story:

During the game, Chen and her female friends noticed a sports reporter with press credentials writing and tweeting racially targeted comments about her group, including, “The Asian chick Cameron Crazies behind me are openly swooning over Grayson Allen the way their moms swooned over Cheap Trick.”

…One post included a photo of the group taken without their permission with the caption, “I haven’t been this scrunched up with Asian chicks since I came out of my Korean mother’s womb.”

“We were just kind of shocked,” Chen said. “We didn’t know what to do, we didn’t want to make a big deal in the middle of the game.”

Before he deleted his Twitter account, students saw that he has also recently made many sexist and ableist tweets, including one about “banging this chick” who was missing her left arm.

But the really amazing part? As the Raleigh News & Observer‘s Abbie Bennett and Camila Molina report,  Stansberry doesn’t actually work for the outlet he claimed:

College Insider President Joe Dwyer said in an email to The News & Observer on Wednesday that Stansberry is not employed by or affiliated with College Insider “in any way.”

“He departed his contractor role three years ago and fraudulently gained press credentials for these games,” Dwyer wrote. “This situation is very unfortunate and College Insider has a zero tolerance for this type of behavior.”

Jeffery D. Ugino, an attorney representing College Insider, said in an email Wednesday that Stansberry was last paid by the publication in March 2014.“College Insider has had no contact with Mr. Stansberry in years,” Ugino wrote. “His tweets are deplorable and reprehensible. He should never be credentialed by any school again. College Insider stands with the Duke community in condemning Mr. Stansberry’s actions. There is no place for this type of behavior at Duke, college basketball or any place else.”

It seems remarkable that Stansberry was able to gain press credentials citing a site he hadn’t worked for in over three years. As per the News & Observer, he didn’t have a season-long credential, but did have credentials to three non-conference games this year. And Duke isn’t known for credentialing everyone who asks; in fact, a weird 2012 controversy erupted when they wouldn’t credential Grantland’s Shane Ryan for a Duke-UNC game, which led to then-Grantland editor-in-chief Bill Simmons changing his avatar to “Duke Sucks” and saying he’s always hated them.

Granted, that was for a much higher-profile game than these non-conference matchups, and Duke’s stated rationale was that ESPN already had 10 seats at the game and that for an in-demand matchup like that, they had “an inability to credential blog sites and websites that do not attempt to cover the team on a regular basis.” So it’s not a pure apples-to-apples comparison. But it’s still interesting that Duke was criticized for being too restrictive with access then, and that they’re now at a point where they’ll credential someone who hasn’t written for the site he’s supposedly affiliated with in three years.

It is possible to imagine how this slipped through the cracks. College Insider is a prominent site, which is affiliated with CBS and even has its own postseason tournament. And Stansberry did work for them for a long time (an archived 2010 story says he was in his 13th year writing for them), and he was presumably somewhat known to the Duke media staff. But it’s a little surprising that no one there was looking into what he was writing with his access, or looking to see what he’d written recently before granting him a pass.

Yes, Duke receives a lot of media coverage, but they also have a lot of resources, and it seems curious that they weren’t at least glancing at Stansberry’s supposed stories. If anything, this story should serve as a reminder that it’s worth occasionally checking to see if people are doing what they say they are. (And for journalists, it could be a lesson not to tweet awful things with people standing behind you, but maybe just don’t tweet awful things in general?) In any case, it’s one of the weirdest access stories in a long while.