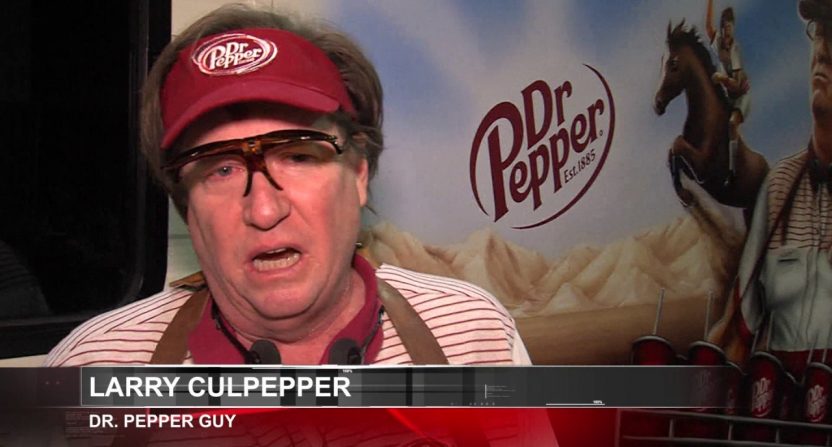 For four years, the fictional Larry Culpepper has been one of the most prominently promoted product pitch personalities (say that 5x fast!). Today we learned that Dr. Pepper has opted to move on from the visor and fanny pack wearing persona this fall.

BREAKING: Jim Connor, who spent the past several years playing football fanatic Larry Culpepper in Dr. Pepper commercials, has told me that the company will not feature Culpepper in commercials going forward. Connor says the decision “Rocked my world” and was “An incredible gig.” pic.twitter.com/an0DJBKO0w

You may be asking yourself who cares, or hell, who is even grieving this development? But per this recent Forbes article, apparently many did enjoy Culpepper’s constant presence during the fall football season in the same way, yes people do watch CBS shows and Jay Leno.

Even better, 67% of college football fans have an extremely or very positive impression of Culpepper, and more than half said he positively impacts their purchase intent.

And the fans don’t just love Culpepper. They want to be him.

Dr. Pepper made the ingenious move in 2015 of creating costumes so fans could become their college football hero. The official costume is available online for $28 and includes  a t-shirt, visor with wig, fanny pack, ID badge, headphones, wristband, knee brace, and Larry’s signature flip shade.

Dr. Pepper is signed on as a College Football Playoff sponsor through 2026, so it’s not like they are retiring Culpepper because they weren’t going to be advertising during college football games going forward. I can’t even really tell you another Dr. Pepper ad campaign outside of Culpepper, but apparently they must think it was time to go in another direction. Etrade got rid of that baby, the Verizon guy is now the Sprint guy, and Kate Upton no longer rides around on horses with form fitting low cut shirts promoting computer games. Sometimes it’s just the right time to make a big step in another direction, which is something I am an expert on having watched Mad Men about five times.

Personally, I tuned out Culpepper and haven’t had a Dr. Pepper since the W administration. Maybe whatever comes next will change that but until then, I’m sure the Culpepper fans who undoubtedly have as good taste in soft drinks as they do in spokespeople, will not be happy with this news. Perhaps put a little rum in that Dr. Pepper to drown your sorrows.