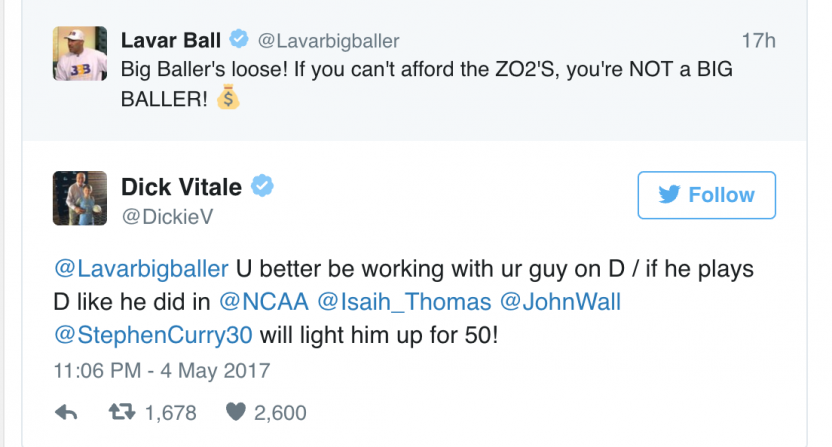 Above all, ESPN analyst Dick Vitale is known for his positivity. Everyone is a “PTPer” or a “Diaper Dandy” or “something special.”

But on the subject of Lonzo and LaVar Ball, Vitale is strikingly and surprisingly negative.

Like many, many other people, Vitale seems to think LaVar Ball is a clown, his plan to sell his son’s sneakers for $495 is crazy and all the commotion around him over the past months is bad for college basketball. Over the last couple days, Vitale has expressed that sentiment quite harshly.

All I can say LaVar Ball is doing all he can to have his son disliked by everyone. @darrenrovell https://t.co/BHmalpxqDI

Unlike the many, many LaVar Ball critics who enjoy watching Lonzo play and don’t bear any grudge against the NBA point guard, Vitale has some quibbles with the younger Ball as well.

Namely, Dickie V thinks Lonzo is bad at defense, citing UCLA’s Sweet 16 loss to Kentucky as an example. In that game, De’Aaron Fox scored 39 points on 13-20 shooting, while Ball scored only 10.

Vitale figures that if Fox can score 39 on Ball, NBA stars like Isaiah Thomas, John Wall and Steph Curry will put up even more.

@Lavarbigballer U better be working with ur guy on D / if he plays D like he did in @NCAA @Isaih_Thomas @JohnWall @StephenCurry30 will light him up for 50!

This is at least a little unfair toward Lonzo, who is a 19-year-old NBA Draft prospect, not a polished defensive stopped who would guard an All-Star in a playoff game. Most talent evaluators seem to view Ball as a top five pick in the draft, and Vitale has no real reason to doubt that assessment.

And if Vitale’s point is that LaVar should stop talking until his son shows himself to be as good a player as LaVar thinks… well, yeah. But we should probably leave Lonzo out of it.

Somehow, LaVar Ball has turned even over-enthusiastic Dick Vitale into a hater. Incredible.

Of course, LaVar set his son up for this kind of scrutiny when he decided he wanted to be a recurring subject on sports talk shows. He who giveth hot takes often receiveth hot takes in return.