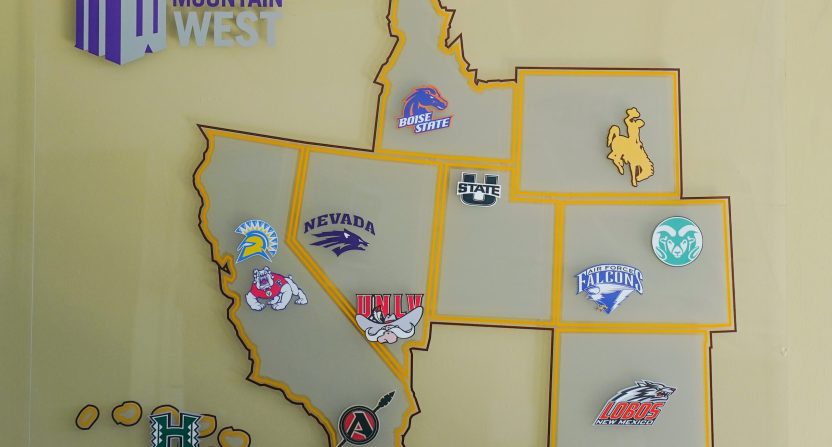 “Unless there’s something else I’m missing, it seems it’s all about TV money to me,” the veteran Fresno State football coach said at Mountain West Conference media days.

And the it to which Tedford referred is the same it San Diego State coach Brady Hoke had in mind, saying: “Money runs it. And they’re the ones with the money.”

It is the direction of college football, the sport’s identity for the foreseeable future. They are the television networks reshaping the college football map via realignment. Whether it’s intent or byproduct of the networks – particularly ESPN and Fox, which partner with the SEC and Big Ten, owners of the sport’s two most lucrative broadcasting rights – is inconsequential.

Reality is that pursuit of their money is changing the game forever.

Realignment has realistically always been a part of college football. Otherwise, Tulane would still be a member of the SEC and the Arizona schools would still share a conference with Hardin-Simmons.

But if UCLA and USC simultaneously announcing their exit from the Pac-12 felt different than other, recent moves, you’re not alone. Tedford compared the two Southern California schools’ June 30 decision to last summer’s announcement that Oklahoma and Texas will leave the Big 12 to join the SEC – a revelation made while the 2021 Mountain West media days were ongoing.

While significant moves, Oklahoma and Texas departing didn’t suck the oxygen from the proverbial in quite the same way. USC and UCLA to the Big Ten, on the other hand, dominated conversation throughout the day.

Talk of realignment and realignment-adjacent topics dominated much of commissioner Craig Thompson’s 45-minute opening address. Thompson stressed confidence in the Mountain West’s current position, both in terms of membership commitment from its 12 football-playing members (Hawaii is an affiliate otherwise aligned with the Big West) and its standing in the television marketplace.

The conference brokered a $270 million combined rights deal with CBS and Fox in January 2020 that runs through the 2025-26 academic year. The contract should produce substantial gains in each league members’ annual revenue, though the 2020 COVID-impacted season obfuscates just how immediate benefits might be seen.

Regardless, the Mountain West theoretically finds itself in a better place than a decade or so ago amid the struggles of the mtn.

Don’t remember the mtn.? Chances are it’s because you didn’t get it with your cable or satellite package. If you do remember the mtn., apologies for any frustrating flashbacks of wanting to tune into a game on the channel only to discover your provider didn’t offer it.

The joint 40-30-30 venture between CBS (via the former CSTV), Comcast and the conference itself launched in 2006 as a response to the Mountain West’s dissatisfaction with ESPN. The network sought to broadcast games midweek in the time slots most closely associated with the Mid-American Conference in the present day.

#MWesttion? Doesn’t have quite the same ring.

A July 2004 edition of The Salt Lake Tribune reported that, additionally, Mountain West brass “objects to the way ESPN controls the rights to all its games – whether it broadcasts them or not.”

Plenty of fans nearly two decades later repeat a similar lament. Credit the Mountain West for at least making an attempt to shake that power structure with the mtn. But ambition and execution failed to align. The myriad distribution challenges became a point of contention with the conference’s standard-bearing programs, BYU and Utah.

Coverage of inability to gain widespread distribution for the mtn. in a 2007 Daily Herald (Provo, Utah) series foreshadows both BYU’s exit from the Mountain West three years later – and could be taken from any number of commentaries about USC and the Pac-12 Network in more recent years. 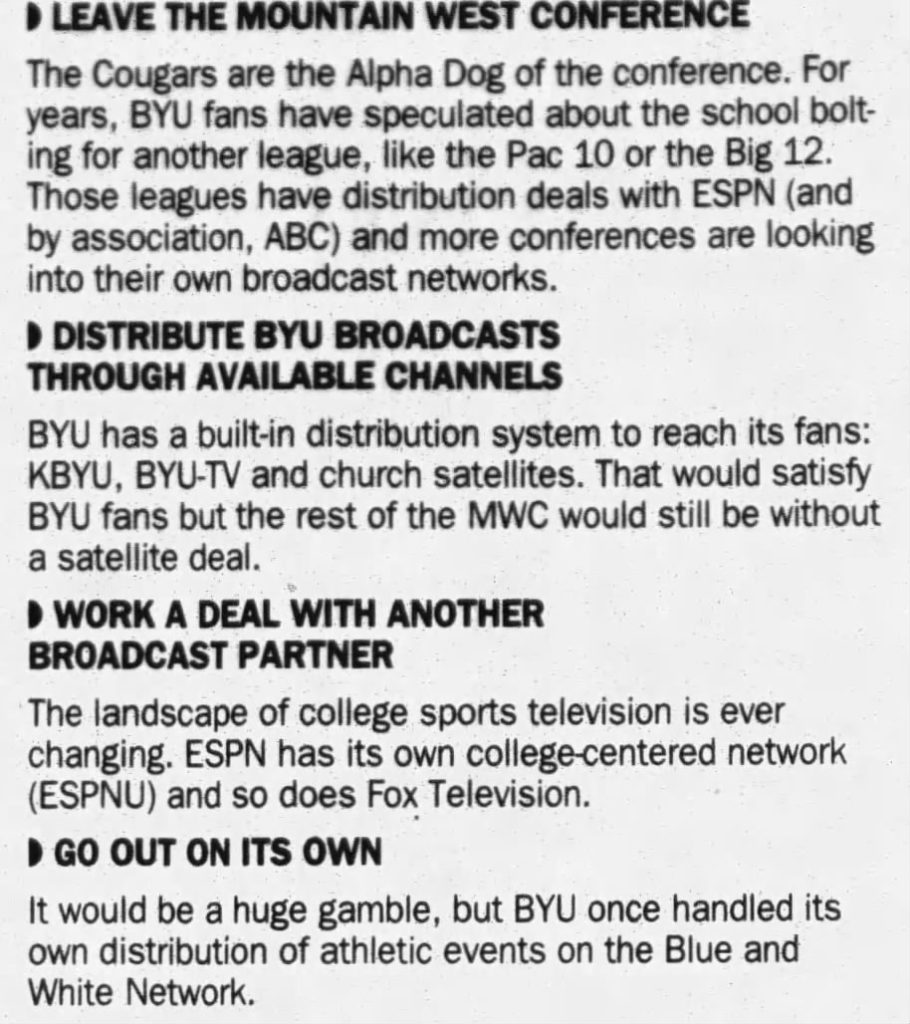 BYU and Utah were on their way out just three years later, and the mtn. was gone five years later. Then, by spring 2013 – less than two years after ESPN aided BYU’s move from the Mountain West into independence with an eight-year broadcasting deal – the Worldwide Leader and the MW were back in business.

More specifically, ESPN and Boise State were in business.

Boise State joined the Mountain West in 2011, bringing a resume built the prior decade in the Western Athletic Conference that included seven top 15 finishes from 2002 through 2010 and Fiesta Bowl titles in the 2006 and 2009 seasons (the latter won at the expense of then-Mountain West member TCU). The ESPN deal called for the Worldwide Leader to broadcast all Boise State home games.

Boise State’s presence remains an important angle to the new TV contract, with Fox retaining the rights to the Broncos’ home games. Fox also has rights to the Mountain West Conference Championship Game, giving the league a high-profile, broadcast-network home on title weekend.

The 2020 contract renegotiation was a win for the conference, to be sure – but still well below the revenue generated in the Power Five conferences (ACC, Big Ten, Big 12, Pac-12 and SEC). Even the Pac-12, about which veritable eulogies were written even before USC and UCLA exited, distributed about five times more per school in its most recent budget reports than the forecasted Mountain West per-member rates.

Now, a resource gap between college football’s power brokers and the rest of the landscape has always existed. The playing field offers those programs with more shallow pockets an equalizer. Mountain West history is written with such high-profile upsets.

In 2019, Mountain West teams combined to score at least one win over every Power Five conference. Last season, the league beat opponents from the ACC and Pac-12. Boise State – which nearly derailed the Playoff aspirations of Oklahoma State well before the epic Big 12 Championship Game loss to Baylor – scored a road win over a top 10-ranked BYU bunch that had its own designs on crashing the final four party.

The Mountain West finished the 2021-22 bowl season with the best record of every conference, a feat celebrated at media days with its Bowl Challenge Cup trophy prominently displayed.

“The Mountain West was the highest-ranked Group of Five conference a year ago, which is saying a lot, considering Cincinnati made the Playoff,” said Utah State coach Blake Anderson. “When you cross conference lines, it’s important that we play well.”

The bowl game marked Utah State’s second victory over a Pac-12 opponent last season, which Anderson noted was historically significant as the first time the program scored two such wins. But he also cited the importance of Power Five wins on the future.

“The landscape of college football’s changing. No telling what’s happening in the next few years,” he said. “All we can control is our league, and it’s never been stronger.”

A common refrain echoed in the days and weeks since the Big Ten Manifest Destiny, however, is that it’s the biggest step taken yet toward creating a new league altogether; a league in which the Fox-backed Big Ten and ESPN-backed SEC form their own league and only play each other.

Maybe it’s just paranoid speculation, but the idea’s been broached enough to dismiss it outright. It doesn’t help curtail those concerns when a face of one of those TV networks’ college football broadcast touts realignment as delivering “better games.”

It is incredibly hard to see right now, in particular if you're team is outside SEC or Big 10, but the long term outlook for fans is a good one…We will look back on these times as the moves that shaped a better post-season, more quality non-con games, & stronger governance

Better is a wholly subjective label. Was Boise State beating Oklahoma in the 2007 Fiesta Bowl not one of the best games in college football history? And couldn’t one argue that Fresno State’s win over UCLA last season was better than the Bruins’ defeat of LSU two weeks earlier?

“It would be a shame if you’re not playing to be one of the…top 10 teams in the country,” said Tedford. “It’s always great to play those [power-conference] teams, and we’ve had a lot of success against teams like that.”

But in an unfortunate reflection that on-field results don’t necessarily dictate TV dollars, Fresno State has beaten the big boys while tip-toeing through the graveyard of conferences: from the defunct Pacific Coast Athletic Association; to the Big West, which no longer sponsors football; to the WAC, which went football-dark for almost a decade before reemerging as a Football Championship Subdivision league.

Tough questions that won’t be answered on the field, but perhaps in courtrooms. After all, it was from within the Mountain West footprint that pressure on the Bowl Championship Series was applied its heaviest in the years leading up to the formation of a playoff.

Former Utah attorney general Mark Shurtleff pursued an antitrust lawsuit against the BCS beginning in 2009, immediately after the then-Mountain West member Utah Utes completed the only undefeated in Div. I that season – and had no viable path to a national championship.

In a similar vein, California Gov. Gavin Newsom has publicly decried UCLA’s decision to leave the Pac-12 and demanded transparency in the process.

But for as much as they might intersect, there’s still a world of difference between TV executives, attorneys and politicians compared to coaches, coordinators and football players.

“Can we just talk about third-and-5?” Tedford lamented. “If we’re going to run or throw at the 5-yard line?”

Getting into football talk at a football media event may not seem like a novel concept, but the conversation surrounding the college game anymore feels more like a melodrama than a sport; a story arc on Billions about rights agreements and brand value and antitrust lawsuits more than it is about 3-4 defenses and power-run offenses.

As Tedford said, it’s all about TV money. And in case there was anything question about who’s calling the shots in college football, at the top of the Bowl Challenge Cup trophy celebrating the Mountain West’s postseason excellence is an ESPN logo. 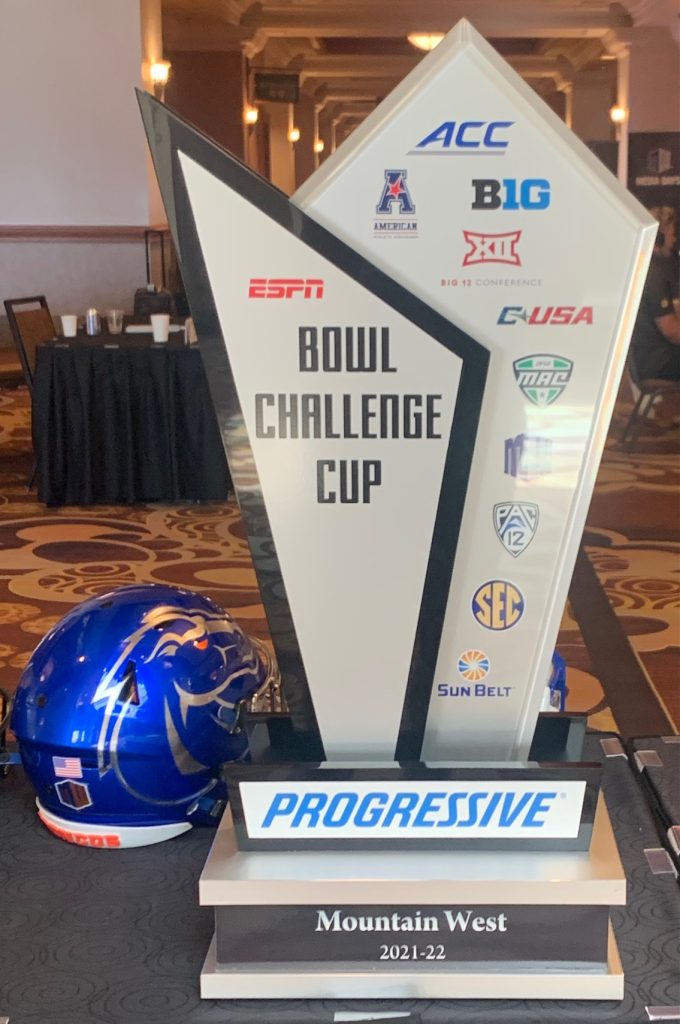