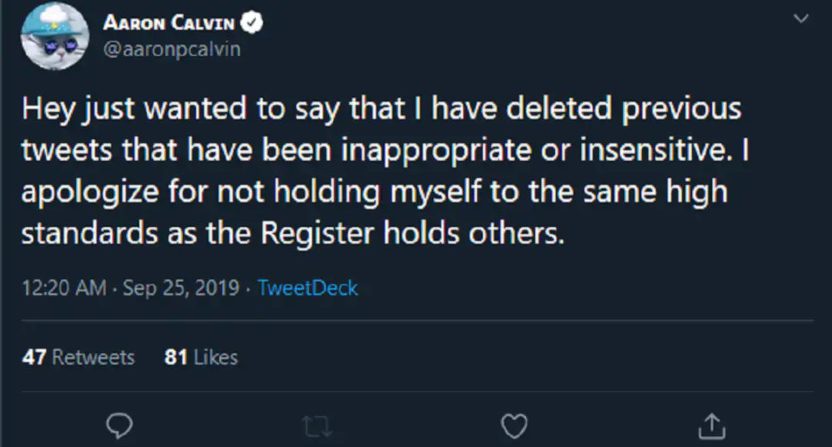 The story of Carson King, the 24-year-old Iowa State fan who attended the Sept. 14 College GameDay broadcast in Ames, Iowa (ahead of the Iowa-Iowa State game) with a “Busch Light Supply Needs Replenished” sign and wound up getting way more money than he expected, has now progressed to corporate sponsorship, backlash, pulled sponsorship, backlash to the backlash, and a reporter losing his job.

King initially received around $11,000 in donations, which he said he would donate to the University of Iowa’s Stead Family Children’s Hospital. That led to even more donations, and to companies like Anheuser-Busch InBev (Busch Light’s parent company) and Venmo (plus several local firms) matching donations, and to Busch promising to give King “beer for a year” (720 cans of beer) branded with his face and “Iowa legend.” They also were selling Busch/King t-shirts, with proceeds going to the hospital.

King was also featured on Scott Van Pelt’s SportsCenter last Tuesday, and he went to New York this past weekend to tour Busch headquarters and appear on “ABC’s Good Morning America,” NBC News, CNN and “Fox and Friends. And the total of donations attributable to him, including the various corporate contributions and matches, was around $1.37 million as of Wednesday; by Friday, that total had risen to over $1.5 million. But a Des Moines Register profile on King led to a whole lot of drama, for him, for the paper, and for the reporter who wrote it, who wound up losing his job thanks to that piece leading to people digging up his own past.

That profile comes from Aaron Calvin of the Register. He’s described in a bioline at the end of the piece as “Aaron Calvin covers trending news for the Register,” and he’s written most of the paper’s various stories on King, including one from Sept. 16 about King’s plan to donate the money). His eventual piece on King was published at 9:33 p.m. Central Time Tuesday. But it made an impact long before that.

Earlier that day, King held a press conference to address tweets from 2012 (when he was a 16-year-old high school student) that Calvin dug up, calling them “hurtful and embarassing” and saying he was referencing Daniel Tosh’s Tosh.0 show. AB InBev also put out a statement saying that they would have “no further association” with King, although they would honor their donation pledge. And we don’t know exactly what was in the tweets, but Calvin’s eventual profile described them near the end this way:

A routine background check of King’s social media revealed two racist jokes, one comparing black mothers to gorillas and another making light of black people killed in the holocaust. The joke tweets date back to 2012, when King was a 16-year-old high school student.

When asked about the tweets, King was remorseful and thanked the Register for pointing them out, saying they made him “sick.” He has since deleted them.

The Register and Calvin took a whole lot of flak for that, though, with many threatening to boycott them over their actions. Here’s the eventual statement they put out, from executive editor Carol Hunter:

A statement from our editor: pic.twitter.com/ZH9AhcrYbg

Meanwhile, that led to critics of the paper’s actions digging through Calvin’s own old tweets and finding their own ammunition, as per Katie Shepherd of The Washington Post:

Between 2010 and 2013, Calvin published tweets that used a racist slur for black people, made light of abusing women, used the word “gay” as a pejorative and mocked the legalization of same-sex marriage by saying he was “totally going to marry a horse.” The Register’s statement on Twitter was soon flooded with images of the reporter’s offensive comments.

That apology can be seen at the top of this post. Shepherd also includes this comment from Hunter, the Register executive editor:

When reached for comment early Wednesday morning, Hunter said the Register was aware of the posts, but declined to comment further on Calvin’s old tweets beyond noting the investigation.

And then Thursday, the Register published a “We hear you. You’re angry. Here’s what we are doing about it” piece from Hunter discussing their actions and revealing that Calvin was no longer with the paper:

I want to be as transparent as possible about what we did and why, answer the questions you’ve raised and tell you what we’ve learned so far and what we’ll try to do better. For one, we’re revising our policies and practices, including those that did not uncover our own reporter’s past inappropriate social media postings. That reporter is no longer with the Register.

Calvin himself spoke to CNN Friday:

“I did apologize for my tweets and I regret them and wouldn’t publish them now,” Calvin told CNN on Friday.

Calvin, 27, told CNN he was 18 and in high school when he posted the tweets.

“I would have never said the word out loud at that point in my life, as I never had,” he said, referring to a racial slur.

This is just the latest case of old tweets causing a problem, whether that’s for on-field sports figures or writers and reporters. But the backlash at the Register and Calvin for pulling these ones up is at a level we haven’t usually seen, and much of that’s centered around both King being 16 when he sent these tweets and around him not really being a public figure beyond the funds he’s been able to raise here (which aren’t benefiting him, but rather the hospital).

It’s also interesting that the Register called this a “routine background check”; digging through seven years of tweets from anyone feels far from routine (and that’s probably why this didn’t come to light earlier, despite tons of stories on King from the Register and other outlets). And it doesn’t appear that the paper did that sort of “routine background check” when they hired Calvin, so there are some justifiable criticisms for hypocrisy there. For the record, here’s what they said about missing those tweets from Calvin in Hunter’s piece Friday:

Now I’ll turn to the investigation into our reporter’s social media use: Until readers called to our attention some inappropriate posts from several years ago, the Register was unaware of them.

Employees of the Register are vetted through typical employment screening methods, which can include a review of past social media activity, but the screening processes did not surface those tweets. Register employees additionally must review and agree to a company-wide social media policy that includes a statement that employees “do not post comments that include discriminatory remarks, harassment, threats of violence or similar content.” We also have policies that speak to our company values.

We took appropriate action because there is nothing more important in journalism than having readers’ trust.

The timeline is notable as well. As Keith Murphy of Des Moines NBC affiliate WHO-TV pointed out, the Register‘s statement arguing that their coverage was pre-empted by King’s own news conference and that AB InBev’s decision to cut ties with King came after that conference doesn’t line up.

Carson tells me he knew at 2:16PM that @BuschBeer was severing ties after tweets brought to its attention.

Busch Light Carson King T-shirt links, with proceeds to @UIchildrens, down by 5 PM.

Press conference didn't even start until 7 PM. It was not why Busch ended relationship. https://t.co/blImJXf0vz

So that raises questions about if the Register directly brought those tweets to the attention of AB InBev before publication, which would seem like an odd move. Hunter’s piece claims  “Neither the Register nor King had notified the company about the tweets. Busch Light made its decision independently of any news coverage on the tweets,” but if you believe her claim, that means that Busch Light did their own independent investigation and found those tweets at the same time (and didn’t do so before they signed on to this deal with King in the first place). And that’s certainly unusual, to say the least.

At any rate, King’s apology in the press conference certainly felt sincere and comprehensive, unlike some other apologies or non-apologies we’ve seen in the sports world. And plenty of companies (including Venmo and local beer and ice cream businesses) are sticking with him, and the donations for the hospital continue to pile up, reaching an estimated $1.5 million as of Wednesday evening with many adding donations after all this news. So King’s accidental fundraiser will ultimately still be very successful, despite all the controversy it’s spawned.