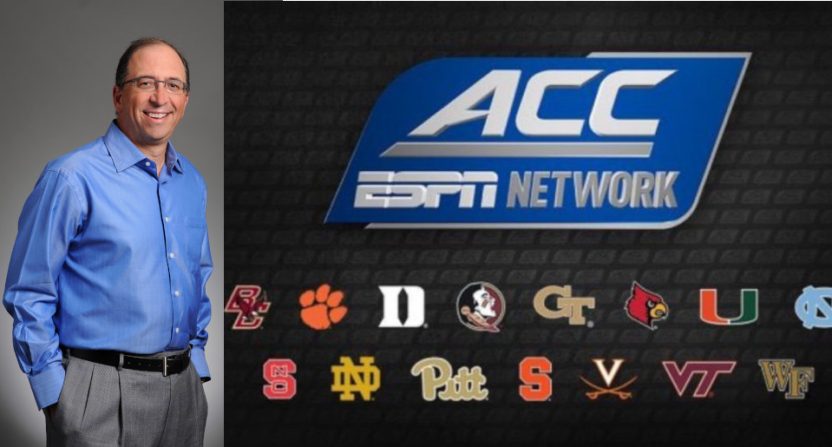 The ACC Network launched last week and aired its first football game Thursday night, and it’s already made a major overall impact for the conference. The deal to create the network was struck in 2016, with ESPN signing a rights extension with the conference through 2036 and agreeing to launch the network on linear television in 2019, and the network is projected to help the ACC move up from its fifth-of-five spot in Power Conference per-school payouts, flying past the Pac-12 and drawing even (or better) with the Big 12. Dean Jordan, the managing executive of properties for global sports marketing and talent agency Wasserman, negotiated that rights/network deal for the ACC, and he spoke to Awful Announcing recently about what the network means for both ESPN and the conference.

“For ESPN, it gives them a long-term deal on multiple fronts, both with the base deal and with the network, with one of the Power Five conferences,” Jordan said. “So, obviously that’s nice to have a deal for that amount of time. For the conference, it does a number of things; it enhances the distribution and exposure for a significant number of football and basketball games and it provides exposure for a lot of Olympic sports programming and gets it out there. And then there’s all the other ancillary programming that’s been developed to tell a lot of the great stories that have transpired over the history of this league, and currently with all the great athletes that exist. And then it obviously will have a positive financial impact for the conference to allow them to keep pace with the rest of their Power Five brethren.”

“And it’s going to bring a lot more technology, and very technologically advanced video and production operations, to the campuses. And that is something that was a strategic decision on the part of the campuses; ‘If we’re going to build out production facilities, we’re going to make them as technologically advanced as we possibly can.’ Because there are more uses than just sports game productions. So they’ve now got some of the best resources and capabilities to self-produce all kinds of content of anyone in the country.”

In the lead-up to the ACC Network launch, there were significant questions about if it would actually work to launch a new linear network in 2019 at a time when plenty of distributors are trying to cut back on what they’re paying sports channels. And ACC Network had a lot of carriage issues early on, with no Charter, Dish or Comcast deals as of last month. However, they’ve since signed deals with Charter and Dish, and while there are still numerous holdouts, most of them (other than Comcast) aren’t all that big. And Jordan said it wasn’t necessarily much easier launching a conference network before this; in fact, he feels there are some advantages now that didn’t exist a decade ago.

“I think it’s always been challenging. If you recall when the Big Ten Network launched in 2007, they went a full year without Comcast before Comcast signed up. So distribution battles and tough negotiations aren’t anything new. It may be a little more challenging in some respects, because over the last twenty, twenty-five years because of consolidation, the number of distributors has has shrunk and so the ones you’re dealing with have kind of a bigger base.”

“But on the other hand, from a positive standpoint, the new digital MVPDs like YouTube TV, Hulu, and PlayStation Vue, those are things that you didn’t have before. If you had a small cable system somewhere and they decided that they didn’t want to carry it, well, the people that were served by that system had no choice. …In some ways it might be maybe a little more challenging with linear providers. But the digital bundles provide programmers an asset that they didn’t have before.”

Jordan spoke to AA before the Dish deal was signed, and even with that, he said he was still impressed with the carriage ACC Network had picked up.

“It is right where we projected that it would be at launch, maybe even a little ahead. You always anticipate that you’re going to have some holdouts, but we’re confident that eventually we’ll have everyone on board.”

Jordan said the eventual goal is to strike deals with the holdouts and get to around the level of carriage of SEC Network (an estimated 59 million subscribers as of last month) and Big Ten Network (55 million).

“We still have a couple of big providers out there that have yet to sign up, so obviously we anticipate that at some point in time, they’ll be on board. Once that’s done, Big Ten Network, ACC Network, SEC Network will all roughly be the same size, and that’s in the mid-50s, 55, 57 million once everything is fully distributed. So they’ll be on par with the SEC Network and the Big Ten Network. And there’s going to be 40 football games, over a hundred basketball games, another 250 to 300 Olympic sports events, so a lot of exposure that wasn’t there before for Olympic sports, broader exposure for more games, for some basketball, and really the opportunity to have the shoulder programming to tell the stories on the great teams and great athletes in the conference.”

There have been different approaches to conference networks over the years, with the Big Ten partnering with Fox, the SEC partnering with ESPN, and the Pac-12 going it alone. But Jordan said ESPN was a natural fit for the conference given both the need for a partner and the long history of ESPN broadcasting ACC games.

“Number one, they’ve been a long-term partner with the ACC [ACC events on ESPN date back to the network’s launch in 1979]. That relationship’s been going on forever. And they were the conference’s partner for their base agreement. And in this day and age, you can’t launch a network as an independent; you have to have someone that has the ability to package and leverage you in distribution negotiations. So you wouldn’t want to try this without a strategic partner like ESPN, and  because they’ve been the ACC’s partner for so long, it was just a natural fit.”

The ACC Network is also interesting in that it features Notre Dame, an ACC member in all sports besides football thanks to a 2014 deal extended through 2036 in 2017. Jordan said that deal provides benefits to both Notre Dame and the ACC, and the network provides further exposure to Notre Dame’s Olympic sports.

“Absolutely, it does. Notre Dame’s basketball and Olympic sports are now in one of the most prominent, if not the prominent, conference for men’s basketball. And not only Olympic sports, it brings a football partnership in terms of scheduling, they play five games a year against ACC schools. And for all the games that are played at ACC stadiums, obviously the ACC controls the television. So it brings up two or three football games a year into the ACC TV package and it brings the thousands of Notre Dame fans and alumni to the table. And that’s interest in big markets, Notre Dame fans are heavily in New York and in Chicago and up and down the East Coast. And it’s great to expand the overall ACC fan base, and Notre Dame did that for sure.”