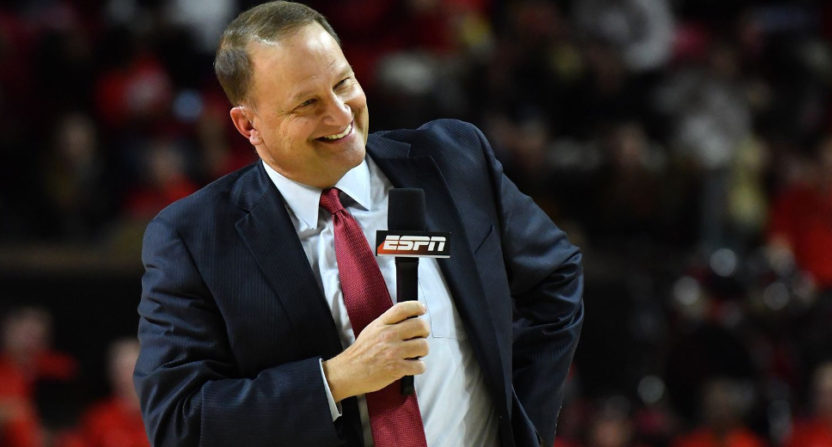 The NCAA decided Tuesday that the Louisville Cardinals’ basketball team would have to vacate wins from 2011 through 2015, including their 2013 national title, as part of the sanctions over the scandal that involved a former director of basketball operations “arranging striptease dances and sex acts for prospects, student-athletes and others.” That scandal led to an FBI investigation and the firing of head coach Rick Pitino and athletic director Tom Jurich in September.

The sanctions led to some interesting comments from Indianapolis radio host and ESPN college basketball commentator Dan Dakich, who said last month that a source told him Louisville had lost its appeal and would have to forfeit that title and repay millions.

At the time, Dakich was promptly shot down by the school (a spokesman called Dakich’s report “pure speculation“), Cardinals’ acting athletic director Vince Tyra (who said a couple of weeks later “I was embarrassed for Dan“), and some Louisville-based media members. However, the end result now appears to be pretty close to what he reported back in January. (There’s some dispute over the exact dollar figures to be repaid, as we’ll get into later, but the report of Louisville losing its appeal and taking down the championship banner certainly worked out.)

And on Tuesday, Dakich went to town on those who said he was wrong:

Hey #Louisville #Cardinals crazies that cursed and sent hatred at @dandakich via phone, twitter or email, feel free to call in and apologize today. 317-239-1070 @1070thefan We're live until 3pm EST.

So does Vince Tyra apologize to Dakich for being right now or nah?

Somewhere @dandakich is smirking and waiting for the phone lines to start ringing in with apologies. #l1c4 and Pitino still saying he didn’t do anything wrong

Asked what his reaction was to Dan Dakich’s report two weeks ago that Louisville lost its Infractions appeal, Vince Tyra just says, “I was embarrassed for Dan.”

This didn't age well for the Louisville AD or Louisville Media ..we are discussing now on @1070thefan https://t.co/5Abb1FUg2u

Some criticized Dakich for including in that report that the school could be fined up to $15 million when the official NCAA number released Tuesday was only $600,000. However, the school is also supposed to return “millions in conference revenue from the 2012-15 NCAA Tournaments.”

Leaving aside the number, though, it’s clear that Tyra’s “I was embarrassed for Dan” comments didn’t hold up too well, at the very least. And it’s understandable why Dakich wants to take a victory lap after being criticized for comments that appear to have since been proven at least partly true.

Of course, there are perhaps some additional elements to consider here. Louisville’s January denial of Dakich’s report said “The NCAA will contact the university in advance of any announcement regarding the appeal. We have not been contacted by the NCAA,” and that part appears to be accurate. The official announcement wasn’t made until now.

There’s still debate over the dollar figure, and it’s also possible for Dakich to have been speculative at the time but eventually proven right. Stories can change, and even having the eventual outcome right doesn’t always vindicate initial reports, just as having the eventual outcome wrong doesn’t always disprove reports that may have been accurate at the time.

But the university’s intense denial of Dakich’s report and the “embarrassed” comments from Tyra in particular don’t look great in retrospect, and it makes some sense for Dakich to dunk on all those who criticized him here. His January report looks a lot better now than Louisville’s attempts to refute it. And given the amount of criticism he took at the time, it’s understandable why he wants to take a victory lap now.