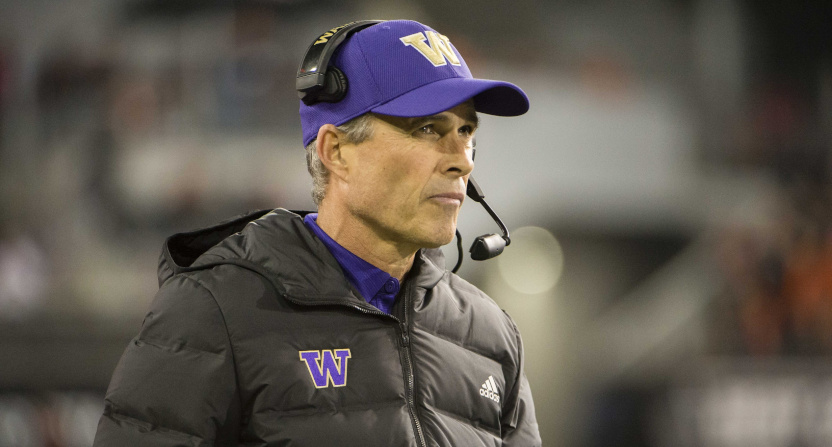 Monday saw the surprising news that Washington Huskies’ head coach Chris Petersen was stepping down following their bowl game (after six seasons there, a 54-26 record, two Pac-12 titles, and a College Football Playoff appearance), and that’s led to a lot of discussion about what’s next for him. While some have wondered about him heading to other openings, the school’s release included Petersen saying “now is the right time for me to step away from my head coaching duties, and recharge,” so he may not be taking another coaching job just yet. But the 55-year-old Petersen also didn’t say he’s retiring from coaching, so this might be more about a break, and that brings up the possibility of him heading to TV, which has been a frequent move for plenty of coaches. There are some factors to consider there, though.

First, there’s the question of if Petersen would want to do it; he hasn’t always been too into media obligations. And there’s also the question of location. Petersen obviously lives in the Seattle area right now, and Huskies’ announcer Tony Castricone tweeted that Petersen will be staying at the school in a “leadership advisory role,” which makes it sound like he doesn’t have a move planned. This could pose some logistical challenges if Petersen were to take a job with ESPN, which has by far the most college football tonnage (both in terms of games and in terms of studio programming) and seems to be eager to hire high-profile coaches whenever possible.

Seattle to Bristol, Connecticut isn’t an easy commute for studio work. And ESPN also tends to shift their non-conference network crews around from week to week, with many of their games being in the southeast. Fellow Seattle resident Brock Huard spoke about that as part of why he switched from ESPN to Fox this offseason. Flying to Bristol or to a particular game location once a week isn’t necessarily insurmountable, but it is a hurdle.

There are closer networks, of course, with Fox’s college football programming headquartered in Los Angeles (and with their game rights covering the West Coast and much of the middle of the country rather than the southeast) and with the Pac-12 Networks based out of San Francisco. But Fox doesn’t have the tonnage of college football studio shows or games that ESPN does, and they don’t have any obvious big openings right now. That could change if Urban Meyer again leaves TV for coaching, but that’s far from certain at this point. And while the Pac-12 Networks might make some sense, they also don’t have as many slots as ESPN does, and they’re already under fire for their costs; they’re not necessarily going to throw a lot of money at former coaches. There are other networks broadcasting college football too, but there isn’t an easy or obvious spot to fit Petersen in.

Even disregarding the location challenges, it’s notable that there’s some past history between Petersen and ESPN. In 2017, Petersen criticized late starting times for Huskies’ games on ESPN, and ESPN shot back with a ridiculous “You should be thanking ESPN!” rant from Kirk Herbstreit and with a sideline cupcake stunt during a Washington broadcast. The network later apologized for the cupcakes, but the drama continued in 2018, with play-by-play commentator Mark Jones (who was on that cupcake broadcast, and who called Petersen “irascible and somewhat cantankerous” on air) insulting the Huskies on Twitter after their loss to Auburn. That led to complaints from the school and from the Pac-12, and to ESPN removing Jones from Huskies assignments that year.

So, things haven’t always gone well between Petersen and the Worldwide Leader. Of course, that doesn’t necessarily mean all that much; ESPN has hired plenty of coaches who have criticized them at one point or another. But the Petersen/Washington-ESPN history is a significant, and it’s certainly something that makes him going there feel at least a little less likely.

With all that said, though, there could well be some TV work ahead for Petersen if he’s interested. Shifting into TV for a year or two has proven to be a good way for coaches like Urban Meyer and Chip Kelly to keep their profile high while taking time away from coaching, and Petersen has a pretty solid profile from his time at both Boise State and Washington (he has an overall head coaching record of 146–38). And ESPN can always use more prominent coaches, either on game broadcasts or on studio shows, and maybe they can overcome the history here and the location challenges. (Hiring a Pac-12 figure in a decently prominent role might help appease some of the “ESPN ignores the Pac-12!” criticism, too, but then again, they’ve previously hired everyone from Kelly to Jim Mora Jr., (the man UCLA fired to bring in Kelly) and they still get that criticism.) Or maybe Fox could use Petersen to enhance their strategy of focusing on the conferences they have rights to (although a whole lot of that focus has been Big Ten, not Pac-12). Or maybe the Pac-12 Networks could get some buzz by bringing him in.

It’s far from certain that Petersen wants to do TV, and it’s also not certain that there’s a particular landing spot there for him right now. But moving to TV (either short-term or long-term) has certainly worked out well for plenty of other coaches. And with Petersen’s comments about needing to recharge (rather than fully retiring), a short-term TV stint might be just the thing to give him a lesser workload while still keeping him in the public eye.