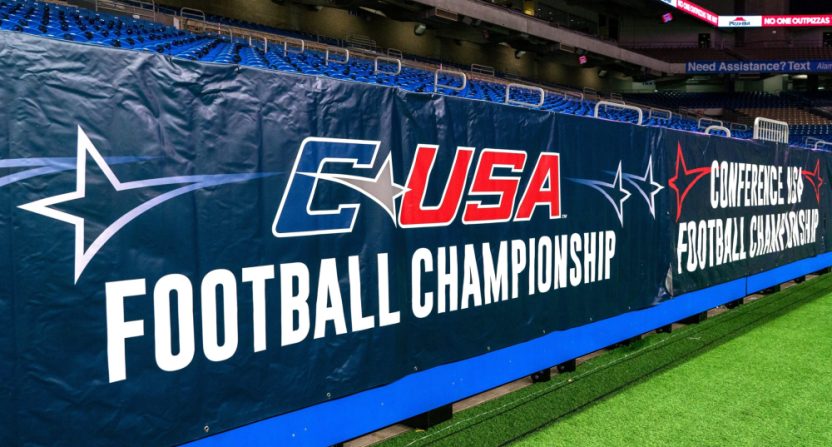 Conference USA has a variety of media rights deals going right now, and while that’s normally not a bad thing, it’s reportedly becoming a problem as the conference’s current cycles comes to an end.

Deals with CBS, ESPN, and Stadium expire next summer, and other partner Facebook hasn’t aired a live game since last year.

In an article detailing the conference’s future, The Athletic notes that Conference USA “has had discussions” with two existing partners, CBS and ESPN. A former staffer also opines that the Stadium and Facebook deals “sucked.”

The patchwork deals have made it frustrating for fans to watch games and for teams to tell families and recruits how to watch them play. Although Stadium and Facebook were accessible to everyone online for free, they weren’t places associated with major sports.

School officials across C-USA believe that exposure should be a higher priority than revenue with the next deal, and that may happen. The league has had discussions with ESPN and CBS through its media rights consultant Octagon, sources said. Stadium may still play a role for some streaming and local broadcasts.

Uncertainty about where a game is airing sucks. A non-insignificant chunk of C-USA games air on ESPN+ alongside games from the MAC and Sun Belt, but there is also typically a game each week on CBS Sports Network and Stadium. If your team bounces around each week, there’s a lot less muscle memory for which network you’ll go to, especially when the options vary from subscription streaming to cable to free streaming.

The conference also could reportedly get on-board with midweek games in its next round of media rights deals, as both the MAC and Sun Belt have.

That exposure doesn’t just come through the broadcaster. One possibility multiple sources mentioned could be midweek football games. The MAC and Sun Belt already hold midweek games in the second half of the season, but staging them in September or October — when ESPN doesn’t have much midweek linear content before basketball season — was an idea floated by multiple officials.

The bottom line is that C-USA’s recent media deals have not helped the conference even when it has successful teams like UAB, UTSA and WKU. As much as anything else, fixing the availability of games is crucial for the future and the image of the conference.

There’s absolutely value out there for Conference USA, and I think the conference would be wise to look at the current media rights deals signed by the MAC and Sun Belt (even though the MAC deal was announced eight years ago). Getting media deals done with multiple partners isn’t a bad thing (SEE: the Big Ten), but when some of those partners end up limiting the reach of a league or conference, it’s probably not the best decision.