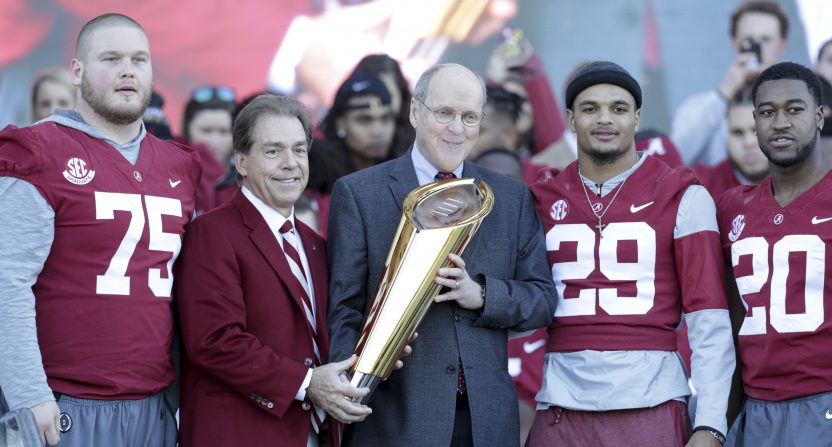 The College Football Playoff’s 12-year deal with ESPN ensures that four teams, and four teams only, would be competing for the national championship, guarding against the inevitable rumblings of expansion. But even when the Playoff was announced in 2014, the most cynical of us realized that the contract’s provisions wouldn’t stop college football from expanding the playoff once conferences started getting left out.

According to Nicole Auerbach at The Athletic, it appears that the powers that be within college football are interested in expanding to an eight-team playoff. In fact, so many people are in favor of expansion that they feel they don’t need to wait out the original deal. ESPN, who has broadcasting rights for the College Football Playoff, told Auerbach that they “have no involvement in the competitive makeup of the CFP” and didn’t entertain the expansion talk.

Like just about anything, those who are most vocal about expansion are those who would benefit most from an eight-team playoff. That means representatives from the Big 12, Big Ten, and Pac 12, who have all missed out on the playoff at least twice since the playoff started and who missed out on revenue related to the playoff, are understandably in favor of expansion. An eight-team playoff would essentially guarantee at least one team from the Power Five conferences to be involved, as well as give an undefeated Group of Five team like Central Florida a better chance to get in.

An idea from former Big 12 commissioner Chuck Neinas has been picking up support among administrators, though according to CFP executive director Bill Hancock, “There have not been any conversations in our meetings with commissioners or presidents about expanding or starting to think about a new format.”

Neinas’ idea for an eight-team playoff would have a guaranteed spot for each Power Five conference champion and then a spot for the top Group of Five team. This year, Alabama (SEC), Clemson (ACC), Oklahoma (Big 12), Ohio State (Big Ten), Washington (Pac 12), and UCF (Group of Five) would be six of the eight teams in the playoff. The final two spots would be at-large, and this year, Notre Dame and Georgia would get those slots. Conference championship games would be eliminated and the higher seeds would host quarterfinal round games. The semifinals and final would be unchanged, and would be held at a neutral site at one of the New Year’s Six bowl games.

The two entities who would likely lose out the most with this format would be the SEC and Notre Dame. The SEC already pretty much has a guaranteed spot in the current four-team format, and the elimination of the highly-rated SEC Championship game would hurt. The independent Notre Dame would have to bank on one of the two at-large spots, which gives them even less of a margin of error in the event of multiple zero or one loss teams from the same conference.

It’s still far too early to determine whether or not this expansion chatter actually leads to changes, but just like in All the President’s Men, it’s all about following the money. That’s how we got to the College Football Playoff in the first place. At some point, administrators discovered that while they had more control in the BCS, everyone could make way more money with a playoff, which would offset losing a bit of their power. Now that we have a playoff, it’s all about the money again. A four-team playoff brings in a lot of revenue, and doubling it to eight should theoretically increase the revenue even more. That’s why expansion is so enticing. Once everyone agrees to a format, the College Football Playoff will increase to eight teams. It’s not a matter of “if, it’s a matter of “when.”