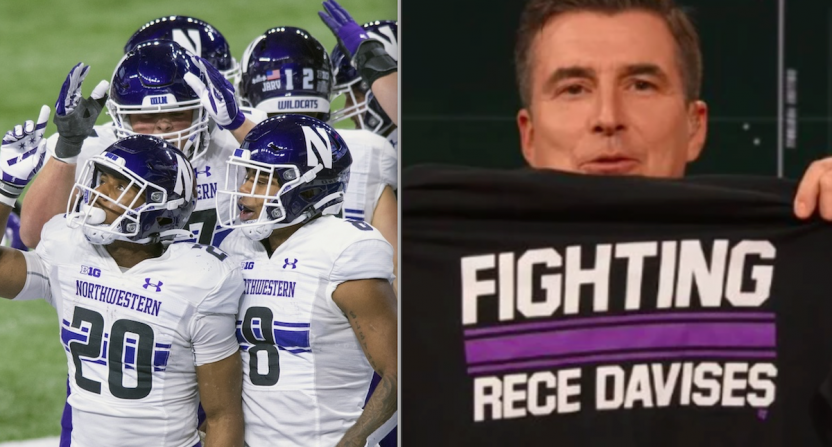 The 2021 Citrus Bowl could have gotten the New Year off to a memorable, hilarious start with an admiring joke about the Northwestern football team. Alas, the bowl’s social media crew was only kidding, leaving college football fans to ponder what could have been.

As you might recall, the Wildcats adopted the nickname “Fighting Rece Davises” after ESPN analyst Joey Galloway derided Northwestern’s athleticism, calling the team “a bunch of Rece Davises out there running around.”

That became an amusing rallying point for Northwestern. Coach Pat Fitzgerald and the players used the insult as motivation while preparing for their matchup against Wisconsin. Breaking T made t-shirts with the nickname, one of which was proudly displayed on ESPN by Davis himself.

As a result, the Citrus Bowl Twitter account teased the possibility of painting one of the end zones in Orlando’s Camping World Stadium with the Fighting Rece Davises nickname. Northwestern football’s social media team called the bluff and dared the bowl game to follow through on that tease.

ok we stayed up all night but we think we got this right pic.twitter.com/kkLvNyhNpJ

The Citrus Bowl team then posted an image to Twitter that indicated the grounds crew indeed fulfilled the tantalizing possibility: The Wildcats’ end zone painted with “Fighting Rece Davises” instead of “Northwestern.”

Was this really happening? Would the ABC broadcast team of Dave Flemming, Rod Gilmore, and Paul Carcaterra have to explain to a national audience enjoying an appetizer to the College Football Playoff why Northwestern’s end zone had “Fighting Rece Davises” painted there?

Unfortunately, it was a prank served up with some excellent Photoshopping. Those on the scene confirmed from the Camping World Stadium press box confirmed that the Wildcats’ end zone was painted with “Northwestern.”

Nothing like a bowl game in your backyard! Auburn vs Northwestern in the Citrus bowl.

Tonight on @SpecSports360 find out why this game is a little more special for one player on @AuburnFootball’s roster. pic.twitter.com/GIDYkbH2w0

Oh, what could have been. If only Citrus Bowl officials had the same ambition — and sense of humor — as its social media team.

Maybe the end zone would’ve been a bit too jokey for what’s supposed to be a prestigious bowl game which schools are honored to play in. (And maybe “Fighting Rece Davises” is a joke that was too inside.) But it would’ve been perfect for this 2020-21 college football season, and a much-needed laugh to start what we’re all hoping is a much better, more enjoyable year to come.

Oh, the Citrus Bowl still got the last laugh: