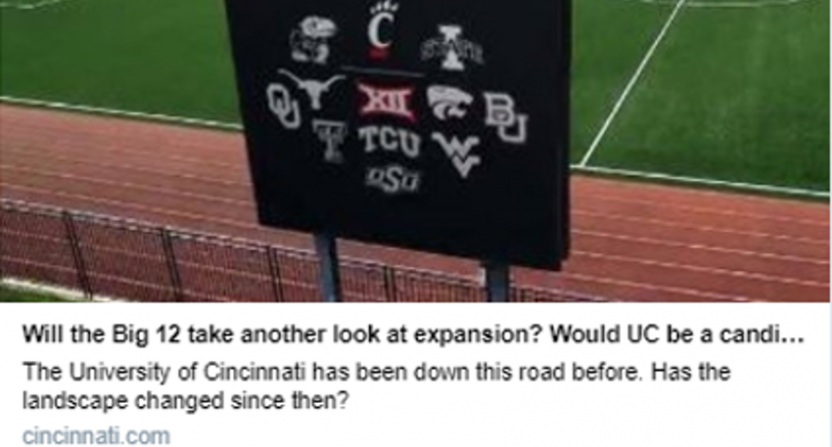 There were a whole lot of Twitter jokes about Monday Night Football’s high-scoring Chiefs-Rams game (it finished 54-51, and produced more touchdowns than the Buffalo Bills have scored all season) being a Big 12 game, given that college conference’s proclivity for shootouts. However, only one of those jokes appears to have been taken seriously and used as the basis for a newspaper article.

On Tuesday, the Cincinnati Enquirer ran, then quickly deleted, a piece (archived here) from sports editor Jason Hoffman titled “Will the Big 12 take another look at expansion? Would UC be a candidate again?” (Complete with the above illustration that showed the Cincinnati Bearcats’ logo photoshopped onto a Big 12 Conference sign.) The source for that piece? This Reddit CFB tweet joking that the Big 12 would want to add the Chiefs and Rams:

Update: Hoffman spoke to Awful Announcing and took responsibility for the mistake. “I messed up; there’s no excuse, really. Everyone knows to check timestamps on tweets and check all the replies on tweets, and it was late in the night and I was in the middle of feeding my two-year-old, and I was like ‘Holy shit, Reddit College Football posted this,’ and you know, half their stuff’s legit, half of it’s not, and I saw national writers retweeting it and I didn’t connect the dots, because I was asleep by the time Monday Night Football was over Monday night. I messed up. And 20 minutes after my producer posted it…he posted it and didn’t question me on it, but that’s not his fault, that’s my fault, I’m the editor, he shouldn’t have to question me on this…I started looking at this and was like ‘Holy crap, everyone was making fun of this on Monday night, and this just came in late Monday night, and I didn’t check the timestamp. So it’s my fault, hand up; forgot the golden rule of checking tweets, thought it was a current tweet, didn’t check the timestamp, and I own it.”

Here’s the key part of what that turned into when the Enquirer picked it up:

A little more than two years ago, the Big 12 Conference’s flirtation with expansion ended in a conference room in a hotel in Texas.

With it, went the hopes for the University of Cincinnati to get back into a “Power Five” (Big Ten, SEC, ACC, Pac 12 and Big 12) conference.

If the Big 12 does decide to expand, The Enquirer/Cincinnati.com will have complete coverage every step of the way.

This obviously sparked a discussion on Reddit, and the RedditCFB account had their own pretty funny response with a link to the Enquirer article:

<cough> so it appears we were the only ones watching the Chiefs and Rams last night… https://t.co/BXi0dQOHP3

There have been numerous cases of broadcasters and newspapers taking Twitter jokes out of context and reporting them seriously, and many outlets get fooled by dumb things from time to time (including us), but this one is particularly funny. Yes, tweets don’t always show up chronologically or in context, but it seems that even the most cursory look at the account’s other tweets (or even at Twitter in general at that point in time, which was filled with Chiefs-Rams discussion and Big 12 jokes) around that point would have revealed what was going on here. And for the record, it seems safe to say the Big 12 will not be inviting NFL teams to join the conference.