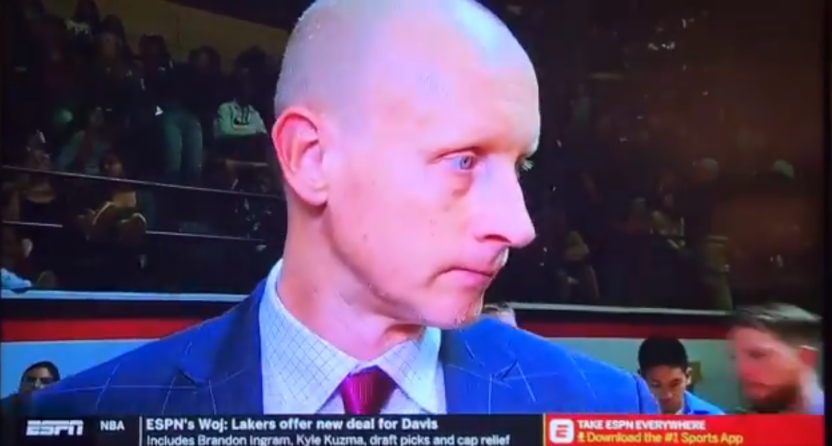 The No. 16 Louisville Cardinals pulled off a 72-64 road win against the No. 11 Virginia Tech Hokies in NCAA men’s basketball Monday night, but a lot of the discussion around the game wound up being about Louisville head coach Chris Mack’s halftime interview with ESPN’s Allison Williams. The first half saw the Cardinals jump out to a 14-4 lead early and a 28-20 with 5:23 left before the Hokies battled back to cut the deficit to 28-26 inside the final 30 seconds. Louisville’s Steven Enoch then hit a three-pointer to make it 31-26 heading into the half, but there was still definitely a sense that the Hokies had bounced back from that poor start, so Williams asked Mack “What are you seeing that’s allowed Virginia Tech to get back in this late in that first half?” And Mack didn’t appear to like that question:

Mack’s response was just “Well, they’re one of the top teams in the country.” Williams responds “Okay,” and Mack walks away as she adds a “Thank you.” And Mack’s lack of response to Williams’ actual question prompted some Twitter criticism from some of her ESPN colleagues, most notably baseball reporter Buster Olney and SportsCenter anchor Randy Scott:

Here’s the problem w/ laughing at & glorifying Popovich for years:
you create a generation of FAR less accomplished coaches who think this is OK.
When, really, it’s rude & unoriginal.

Question: What have you seen from Virginia Tech that’s allowed them to get back in this game? https://t.co/J0FjtNa4Cc

I don’t get it. From the perspective of a prospective recruit or recruit’s parents, how does that make you look good, as a coach? One of best in-game interviews is Calipari, who uses it as a platform to speak to recruits, parents, fans.

Olney took some backlash for that from Louisville fans (probably enhanced by him mentioning Kentucky coach Calipari as a positive example) and responded with further comments defending his position:

It's just a fact: A lot of coaches view those opportunities on national television as a way to speak to fans, recruits, parents. If the coaches don't like the questions or something about the interview, they'll save that conversation for off the air.

Yes. We're only talking about the strategy of handling interviews on national television, not about the competency of a coach who is obviously vary good at what he does.

Plus, the overarching conversation is about how to handle those interviews. Especially for young coaches, they're an opportunity, not a burden.

At any rate, Mack apologized in a press conference Tuesday, as relayed by Danielle Lerner of the Louisville Courier-Journal. He also said he apologized to Williams in a post-game interview that wasn’t aired:

Re: ESPN halftime interview, Chris Mack tells me he apologized to Allison Williams in a postgame interview that may not have aired.

“I’m human and I make mistakes, but I take ownership of it. I won’t lose sleep over people not liking me. It’s onto the next crisis in the world.”

This is of course not the biggest deal in the world, and it’s far from the worst response we’ve seen to a sideline interview. But at the same time, this wasn’t a great look for Mack, and while he may not have loved that particular question, it wasn’t invalid. And Olney and Scott made some valid points with their criticisms.

Now that Mack’s apologized (and it’s good that he apologized to Williams personally, and that he even tried to do so on-air), the world can probably move on, but this was still an odd sideline interview moment. Coaches don’t have to love sideline interviews (and many don’t) or the questions asked, but there’s a way to respond to even questions you don’t like without drawing national attention for your behavior, and some coaches might be well-advised to try that.