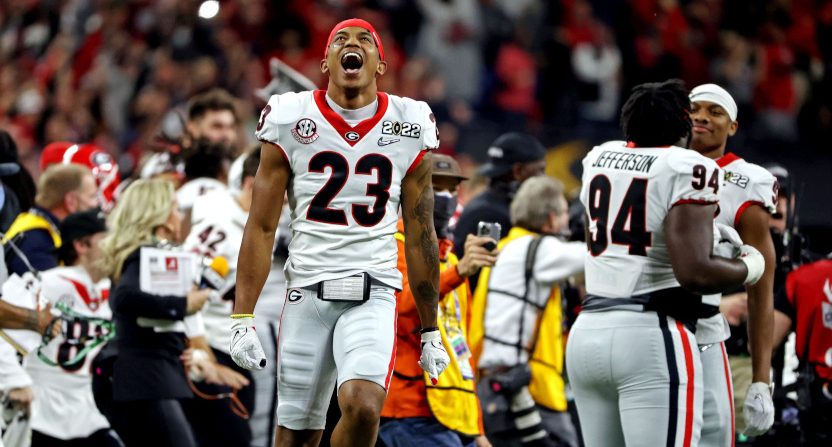 There are some ratings events that tell stories obviously good or obviously bad for a network and a league, and there are some where the story is much more dependent on who’s interpreting it and what lens they’re looking through. This year’s College Football Playoff National Championship on Monday, which saw the No. 3 Georgia Bulldogs (WR Jaylen Johnson is shown celebrating at top) beat the No. 1 Alabama Crimson Tide 33-18, falls into the “many possible interpretations” category.  Austin Karp of Sports Business Daily summed a couple of those up in his tweet of the numbers, covering both the major increase over last year’s Alabama-Ohio State game (a record low) and how this still ranked below every other CFP title game and every other BCS national championship game going back to 2005:

Georgia-Alabama CFP title game averaged 22.6 million viewers across ESPN, ESPN2 and ESPNU. Up big from record-low of 18.7 million for Bama-Ohio State in 2021.

Second-lowest since CFP started in 2015.

There’s more highs and lows in there than we usually see in any discussion other than that of cursed frogurt:

On the positive front (much of which can be found in ESPN’s release), the 19 percent/3.9 million viewer growth from last year is good. If this had stayed around the 18.7 million viewer mark we saw last year (which was even below the two semifinals), there would be many more questions. Looking back at some title game history, the 22.6 million viewers here also isn’t that far below the 23.1 million for the 2007-08 BCS title game (LSU-Ohio State) or the 23.9 million for the 2003-04 title game (LSU-Oklahoma), and it’s ahead of both 2001-02 (Miami-Oklahoma, 21.6 million) and 2004-05 (21.4 million). This is also okay by the overall standards of TV these days: this would have tied with a NFL game for the 27th-most watched program of last year, with the only things above that broadcast network NFL games and multi-network coverage of President Biden’s inauguration and the president’s speech to Congress in April. And, as ESPN’s release notes, this is the top event of any kind on cable since the LSU-Clemson title game in 2020 (25.6 million viewers).

It’s also worth keeping in mind the ESPN subscriber context. ESPN had around 90 million subscribers in 2005 and around the same number in 2016, but rocketed up to around 100 million in 2010, and is now at around 80 million (counting traditional cable, satellite, and virtual MVPDs) as per a SBJ report relaying January Nielsen estimates; that’s actually up four million from where ESPN was in October). So in 2005, there were about 11 percent more households that had ESPN than is the case today, and in 2010, there were around 20 percent more. Drawing from a larger pool tends to help ratings, although not always: while the 2006 BCS title game has the largest title game viewership in the BCS or playoff era, 35.6 million, the second-most is the inaugural CFP game in 2015 with 31.4 million viewers, and ESPN’s subscribers were declining from their 2010 high-water mark at that point and heading towards that 2016 figure of 90 million. But it is worth remembering that today’s ESPN is not in as many homes as the network was in 5, 10, or 15 years ago, and that it would take something pretty special to get it back to some of those viewership heights.

With that said, there’s also plenty to note on the side of this being a weak number overall. Yes, it’s better than last year’s number, but most sports took giant nose-dives in 2020 and have gone back to numbers closer to the norm (or, in the case of the NFL, much better than the norm for the last several years) this year. The overall rebound here was notable by percentage, but it still left this as the second-worst number since 2005. Exactly why that is can be debated: the all-SEC matchup (and SEC championship rematch) probably played a role, but that scenario also happened in 2017-18 (these exact teams, 28.4 million) and 2011-12 (Alabama-LSU, 24.2 million). Maybe there’s Alabama fatigue in particular, or maybe something about this particular matchup didn’t appeal. Maybe the defensive start (the game was 3-0 after one quarter and 9-6 at the half) hurt, with some viewers tuning out (although the counterargument is that the final quarter had 29 points and the game was in doubt for most of that, which tends to help viewership).

Amidst the playoff expansion debate, there surely will be plenty of people arguing that this number proves beyond the shadow of a doubt that the current playoff system is bad and wrong and that their particular preferred system would completely change it for the better (while other systems would not). We can’t speak to that; hypotheticals are hypothetical. What we can say is that this is significantly higher than last year, but still a low number for this game, and for this particular matchup (compare to 2017-18). And the really interesting point to watch may be what happens next season; will the title game return to the 25-million-plus number it’s had every year of the playoff beyond the last two, or is this 22.6 million closer to the new normal? We’ll find out.