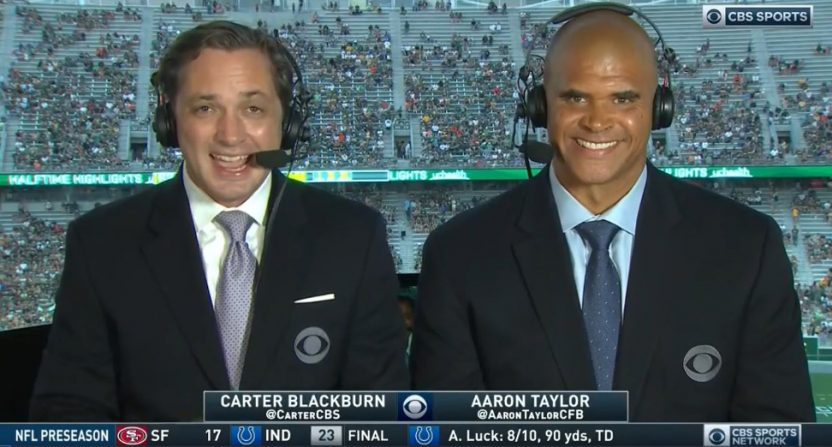 One of the first Week 0 college football games came on CBS Sports Network Saturday, with Hawaii taking on Colorado State in a broadcast featuring CBSSN’s primary CFB team of Carter Blackburn on play-by-play, Aaron Taylor as the analyst and John Schriffen as the sideline reporter. And Taylor drew some discussion for a comment during that broadcast. In the first quarter, after Colorado State tight end Trey McBride was flagged for holding on a play where he grabbed his defender and drove him to the ground, Taylor said “He just raw dogs him,” which is something many probably weren’t expecting to hear during college football:

Taylor says “This is going to set them back a little bit. You see that left arm, he just raw dogs him, drags him to the ground, I mean, there’s no other way to do it. But you’ve got to understand, man, you’re a true freshman. This is moving really fast for Trey right now.” Blackburn, who laughed when Taylor first said “raw-dogs,” then says “That’s the official term?” and Taylor responds “Yes, raw dog.”

Maybe that is a football term for throwing someone to the ground. In popular parlance, though, it has a rather different and much more sexual meaning, referring to unprotected sex. And this created a bit of comment:

Aaron Taylor just said "raw dog" on a live broadcast and yes the Mountain West is a garbage conference this year but I am so happy football is back I'm watching all of this. #cfb #rawdog

So far this football announcer for Hawaii vs CSU has said “rubbing it” and “raw dog it.”
We aren’t even 10 minutes in….????

"He just raw dogs him." Welcome back college football, baby.

This is far from the world’s biggest controversy, especially as Taylor doesn’t seem to be intentionally making the sexual reference here, and he probably does understand that phrase to mean something rather different. But he definitely got some viewers noticing with this one.