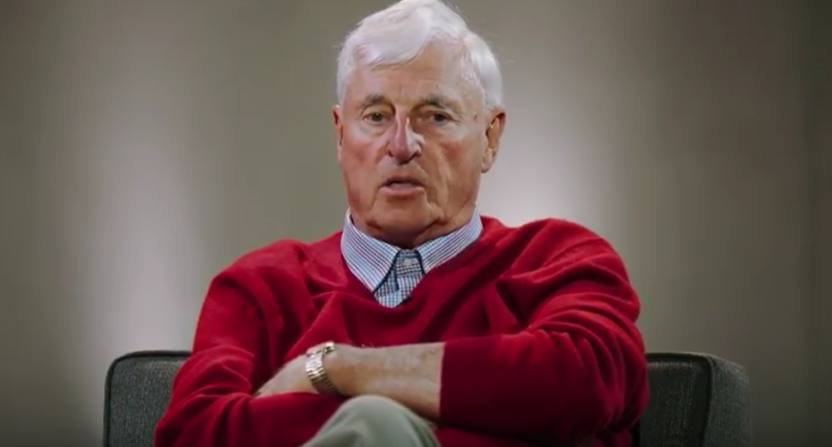 Bobby Knight has always been a controversial figure, from his time as the head basketball coach at Army (1965-71), Indiana (1971-2000), and Texas Tech (2001-08) to his stint as an ESPN analyst (2008-15) to the FBI investigating allegations he groped women during a 2015 visit to an intelligence agency to his support for and advice to Donald Trump during last year’s presidential campaign. Knight’s often said what’s on his mind without a lot of apparent thought for how it will be perceived, and he did just that in an interview with Joe Buck that’s set to air on Audience Network’s Undeniable Wednesday at 8 p.m.

A preview clip shows Buck asking about how Knight was fired from the Indiana job in 2000 after grabbing student Kent Harvey by the arm and cursing at him, choking Neil Reed during a practice, verbally abusing a high-ranking female university official, and displaying an “unacceptable pattern of behavior” that included “gross insubordination,” and Knight responds by saying the firing was only because administrators at the university wanted to get rid of him:

Buck says “We need to talk about the end at Indiana. You didn’t get a chance to leave on your own terms. CNN in 2000 has this report about you choking a player, Neil Reed, during practice. This is an opportunity to talk about that.” Knight says “Well, I’m not going to talk about it, because I’m sure that at one time or another I grabbed a lot of kids.” Buck says “That’s what I was going to ask you. Did society change during the course of time?” and Knight responds “No, I think that people changed there. Enough people changed there that were tired of basketball being the guiding light of the university, and I won’t go in any other direction.”

Buck then brings up the Harvey incident, and Knight says “Some kid came up to me and said ‘Hey Knight, what’s going on?’ That kid made a dumb mistake. I went over to that kid and I did a lot more for the son of a bitch than his parents ever did for him. And I went over there and I said ‘Son, let me tell you something, you don’t address adults like that under any circumstances.’ And that’s why I have no use for Indiana University, because they used that as a reason to get me out of there, and that’s absolute bullshit. Is there anything about bullshit that you don’t understand?” Buck says “No,” and Knight says “Good.”

Knight’s not necessarily wrong that the Harvey incident wasn’t the most severe of his tenure (even Harvey has said he regrets his actions), but it created his firing because he was on a zero-tolerance policy thanks to his past actions (including video emerging of him choking Reed in 1997). That’s not as much “absolute bullshit” as he’d like to believe, and he’s not as innocent as he claims; his “I grabbed a lot of kids” comments are indicative of that, and show some of the issues that occurred during his time at Indiana. And while he found lots of success there, those incidents were always notable, which makes it interesting when documentaries like Showtime’s Perfect In ’76 gloss over them.

At various times during his Indiana stint, Knight was convicted in absentia of hitting a policeman in Puerto Rico, accused of stuffing a LSU fan into a garbage can, ejected and suspended for throwing a chair on the court, criticized for head-butting a player on the bench, investigated for battery for choking a man at a restaurant, and accused of punching a player and grabbing his testicles. So his firing wasn’t just a giant conspiracy to devalue Indiana basketball, although Knight certainly thinks so and still holds a grudge about it, as evidenced by his “I hope they’re all dead” comments about the administrators there earlier this year. Knight trotting the conspiracy theories out again isn’t going to endear him to many, and neither is another segment from this show where he goes after legendary UCLA coach John Wooden for not clamping down more on booster Sam Gilbert:

“I’ve never been a Wooden fan,” Knight says. Buck says “That’s almost heresy,” and Knight says “Not to me it isn’t. Are you familiar with a guy named Sam Gilbert?” Buck says “Yes,” Knight says “I’m glad you are,” Buck says “He kind of did the dirty work,” and Knight says “Not kind of. Sam Gilbert was the number-one recruiter for UCLA. I have a lot of respect for Wooden as a coach, how he coached, he was a good coach, but from then on, and I don’t mind saying it, I don’t respect Wooden, because he allowed Sam Gilbert to do whatever it took to recruit kids. And one time he told me, he said ‘I just didn’t know how to deal with Sam Gilbert.’ And I’m saying to myself ‘I damn sure could have dealt with him.’ Personally, I liked John, as a person, but it isn’t just John, it’s a whole UCLA approach to recruiting. I think John was called in and told he didn’t have to worry about recruiting, that they had people that would take care of that for him. And that’s coming from people who really know the circumstances.”

There’s at least some merit to those criticisms, as Gilbert pretty unquestionably was providing impermissible benefits to UCLA athletes while the NCAA looked the other way. And that played a major role in the success of Wooden and the Bruins. But Knight’s claim that he would have done better is something, and the way he goes after Wooden here isn’t going to win him any more fans. Knight’s overall comments make it seem like he’s not too interested in that anyway, though.

The episode of Undeniable with Knight’s full interview will air on AT&T/DirecTV’s Audience Network Wednesday at 8 p.m. ET/PT.