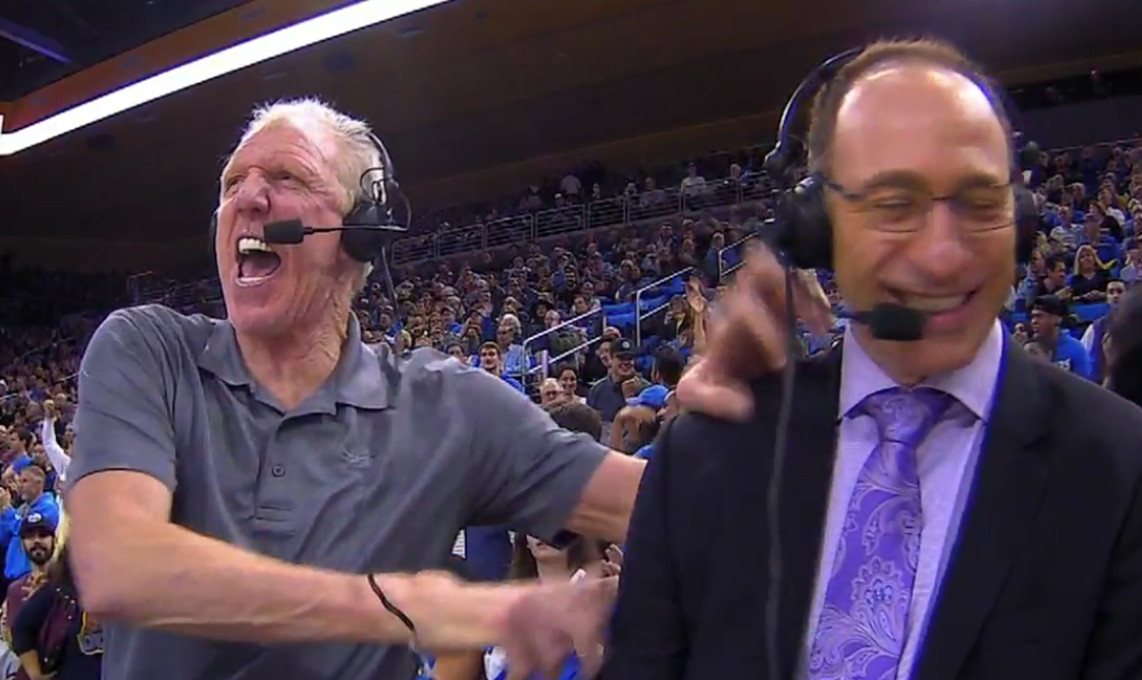 The Dave Pasch-Bill Walton announcing pairing always produces some interesting moments, such as Wednesday’s “Dave??” graphic, and it came through again Thursday when they were calling the Cal-UCLA game on ESPN. With UCLA up 39-22, Walton started talking about how Cal couldn’t do anything to stop them, which led to him growling and clawing at Pasch:

Walton goes “And there’s nothing that the Bears can do about it. They can growl, “Arrrr,” they can scratch, “Arrrr,” but they can’t make a shot!” Pasch then goes “You literally just scratched me,” and Walton goes “Quit whining.” Here’s a pre-commercial replay with the announcer cam showing Walton actually doing this. (And really, if you’re going to have a bear moment, Golden Bears vs. Bruins feels like the perfect setting for it.)

Earlier in the broadcast, too, Walton and Pasch discussed the news of Walton being chosen for ESPN’s college football national championship game Megacast. He’ll be on the ESPNU “ESPN Voices” broadcast with Michelle Beadle, Marcellus Wiley and Keyshawn Johnson. Here are the clips of them talking about that:

The best part there is Pasch going “Do they know that you’re actually expected to talk about the game? Which might be tough, because you don’t usually talk about the game when we’re doing basketball, but now it’s football.” Walton counters “I completely disagree. You’re just not listening, and you don’t understand the seamless transition in how it all rolls into one. Please. We haven’t even gotten to the Luskin Center, or Shep Gordon, the Supermensch, or Jim Morrison and Ray Manzerek.” It sounds like Walton believes in the fundamental interconnectedness of all things, so perhaps he should apply for a role on the new (and excellent) Dirk Gently series?

The mentions of Manzarek and Morrison (founding members of The Doors) here led into a Walton segue later, after a discussion of volcanoes, one of his favorite topics:

Walton also told Snoop Dogg to “spark it up”:

For all the off-topic banter, it’s worth noting that this broadcast pairing can be plenty of fun when something happens in the game, too, as it did with UCLA guard Lonzo Ball’s three at the halftime buzzer:

The pairing of Pasch and Walton can be a lot of fun, both off-topic and on, and this broadcast was definitely proof of that.