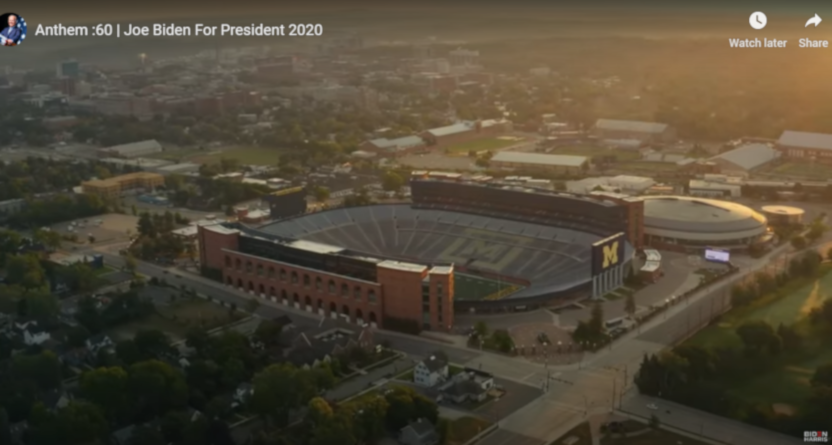 For all of the “stick to sports” arguments out there, sports have frequently been intertwined with political and social issues. The history there spans everything from early 20th-century boxers who drew a “color line” to racial segregation in other sports to Olympic protests to players refusing to play (old and new) to anthem protests, teams‘ White House visits (or lack thereof), and presidents’ interviews with sports figures. And the latest case of sports and politics combining comes from the Big Ten.

The Big Ten announced August 11 that it wouldn’t play football or other sports this fall amidst the COVID-19 pandemic, and would plan to play its football season in the spring. It was soon joined by the Pac-12, but the other Power Five conferences pushed forward with plans to play. The Big Ten move has now led to protests from some vocal parents, to a lawsuit from some players, to ads from Democratic presidential nominee Joe Biden in Big Ten markets blaming Republican president Donald Trump’s coronavirus response for the postponement or cancellation of sports, to tweets from Trump calling the postponement “disgraceful,” and most recently, to Trump calling Big Ten commissioner Kevin Warren (a call that Fox Sports personality Clay Travis reportedly played a role in arranging) Tuesday and claiming on Twitter after that call that plans to hold a Big Ten season this fall were “on the one yard line” (a claim that’s in some dispute).

Before we get to that, though, here’s one of the Biden ads that reportedly prompted Trump’s reaction here. It’s a sixty-second spot titled “Anthem” that the Biden campaign put out on YouTube Thursday. And it features footage of Michigan Stadium (as seen in the screenshot above) and other empty sports stadiums (and churches, beaches and downtowns), and the text of “Trump put America on the sidelines. Let’s get back in the game.” It (and the shorter thirty-second version) have been running on a lot of digital sites recently. Here’s the ad:

As per John Ourand and Michael Smith of Sports Business Journal, that Biden ad led to Trump’s call to Warren Monday, with help from Travis, Timothy Pataki (director of the White House’s Office of Public Liaison), and Big Ten PR consultant Carrie Cecil:

It was last week that Joe Biden started running commercials in Big Ten markets that blamed Trump’s federal response to the pandemic as the main reason why the conference was not playing. That prompted frustrated White House aides to start talking about how Trump could play a role in getting the Big Ten’s teams back on the field to salvage a season and mute Biden’s attack. Travis, a vocal critic of the Big Ten’s decision, was part of those meetings.

In recent days, Cecil, working as a consultant for the Big Ten, spoke to Travis to see if he might soften his criticism of Warren, a first-year commissioner with a lengthy NFL background, but no college experience. Through those conversations, Travis told Cecil that he was in contact with the White House. Travis took on the role of a matchmaker and connected Cecil to the White House aide. Pataki followed up with a call to Warren to see if he’d speak with Trump. By Monday night, they were all set for Trump to call Warren at 8:30am today. The call lasted roughly 20 minutes.

Had a very productive conversation with Kevin Warren, Commissioner of the Big Ten Conference, about immediately starting up Big Ten football. Would be good (great!) for everyone – Players, Fans, Country. On the one yard line!

But the Big Ten’s response was a lot more measured, as per their statement in this story from Eric Olson of The Associated Press:

The Big Ten, in a statement, said a White House representative reached out to Warren to set up a phone call with Trump. The statement said Warren and Trump had a “productive conversation.”

“The Big Ten Conference and its Return To Competition Task Force, on behalf of the Big Ten Council of Presidents and Chancellors (COP/C), are exhausting every resource to help student-athletes get back to playing the sports they love, at the appropriate time, in the safest and healthiest way possible,” the statement said.

And Yahoo’s Pete Thamel cast further doubt on the “one yard line” claim:

To say multiple sources denied the notion of the Big Ten playing immediately would not be strong enough. The sources heartily laughed at it. The notion of playing around Thanksgiving is in embryonic discussion, and there’s a desire among coaches to start as early as possible. But “immediately” is in another universe, especially with multiple Big Ten teams not even having players on campus right now.

…The notion of President Trump getting on the phone with Warren arose in a call with the Big Ten coaches on Monday night. (The Big Ten confirmed the conversation and called it “productive,” but added that it will return “at the appropriate time.”) The conversation between the president and Warren was arranged, in part, to see if the Big Ten could have access to rapid testing. The Trump administration announced last week that it will deploy 150 million rapid tests in 2020.

That access to testing, at least in theory, could answer some of the medical reservations that the Big Ten’s medical doctors had before the season. But that’s just a theory. Remember, this is a league that didn’t feel comfortable going to full-contact football practices earlier this summer.

What exactly becomes of this is still far from clear. There’s obvious internal and external opposition to the Big Ten’s previous decision to hold off on football until 2021, but it remains to be seen if that opposition (and/or anything from changing testing resources) will be enough to have the schools’ presidents and chancellors reverse their previous decision and play this fall after all (whether that’s for a season beginning in October or one starting in November). But what is clear at the moment is that there are people from both political parties looking to tie the Big Ten’s decision (whether the conference sticks with its original plan or does try to play at some point this fall) to their political narratives. And with several months to go until Election Day, and with plenty yet to come on what the Big Ten will actually do, it seems likely we’ll see a lot more of that in the days ahead.