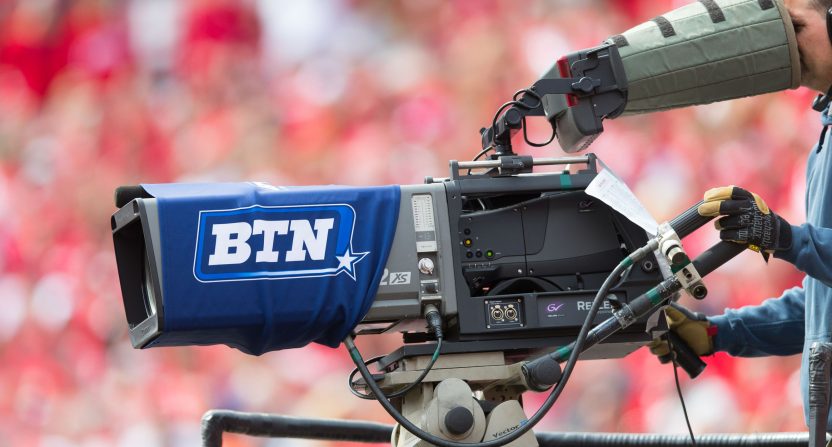 Brace yourselves: the college football broadcaster listings are being released.

On Tuesday, the Big Ten Network announced their broadcaster lineup and programming plans for this fall. Much of this is similar to last year.

Brandon Gaudin returns as a BTN play by play voice, but he won’t be working with James Laurinaitis in 2022. This year, Gaudin’s partners will be Joshua Perry and new addition Jake Butt, with Rick Pizzo returning as the sideline reporter.

Mark Followill, another established play by play voice at BTN and FS1, returns to work with Matt Millen and reporter Elise Menaker, as he did a year ago. And just like last year, Cory Provus will fill in from time to time working with Millen and Menaker.

Lisa Byington is also back, again working with Anthony Herron. That duo’s reporters will be Meghan McKeown and Krystle Rich.

Several other broadcasters return for those weeks where BTN has a packed schedule. Chris Vosters, Jason Ross Jr, Joe Beninati, and Matt Schumacker will work as play by play announcers, J Leman, Matt McGloin, and Brock Vereen will work as analysts, and Brooke Fletcher, Shane Sparks, and Emily Ehman will work as sideline reporters.

BTN Tailgate will have a Saturday morning road show each week. Dave Revsine, Gerry DiNardo, and Howard Griffith will be in studio, while Mike Hall, Brock Vereen and Anthony Herron will be on-site at different Big Ten campuses each week. The first four, starting with Week 1, are Nebraska, Ohio State, Indiana, and Penn State.

Throughout the week, various BTN studio programing will be anchored by Hall, Telly Hughes, Pizzo, and Revsine, with Butt, DiNardo, Griffith, Herron, and Perry working as analysts along with Rick Spielman and Dave Wannstedt.

BTN’s The Journey will also be back for its 11th (!) season, and a second season of The B1G Moment will also debut. Here are the topics for that series, which includes some awesome Big East content.

That Northwestern-Michigan game was absolutely bonkers, and would have lit social media on fire if it happened today.

Anyway, Big Ten Network doesn’t seem to be doing anything earth-shattering or out of their comfort zone this season, but that’s not a bad thing. BTN’s been at this for awhile and knows what works and what doesn’t, and there’s no need to fix what isn’t broken.