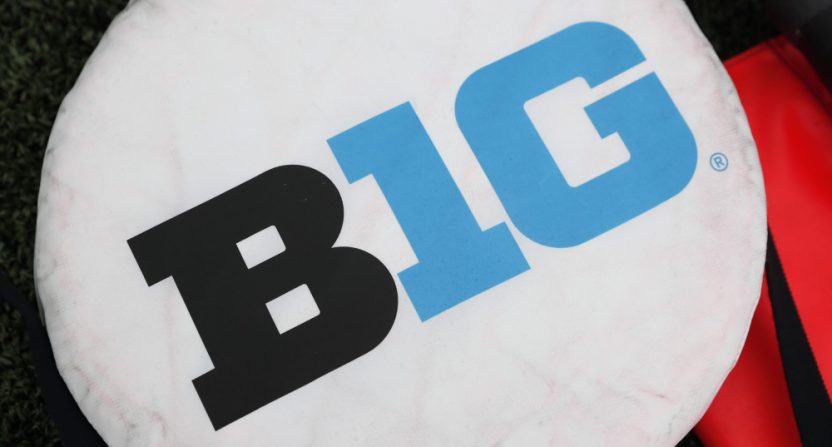 In today’s edition of Big Ten expansion rumors, Dennis Dodd of CBS Sports reports that the conference could expand and poach four more teams from the Pac-12 (Cal, Oregon Stanford, and Washington) if a media partner is willing to pay for a package of Big Ten Network quality games.

The Big Ten’s continued pursuit of four Pac-12 schools is leading to concern that another round of expansion could collapse the Pac-12, industry sources tell CBS Sports. This as Big Ten commissioner Kevin Warren continues to seek an offer from Amazon, or potentially another partner, for additional Big Ten football media rights revenue.

An offer deemed substantial enough would likely convince Big Ten presidents that California, Oregon, Stanford and Washington would be valuable additions to the league from the Pac-12. That figure is believed to be less than $100 million annually.

Fox apparently isn’t too keen on the Big Ten expanding again, and if another TV partner joined the fray, their weekly game pick would fall outside the top four, possibly as low as seventh, with Michigan, Ohio State, and Penn State off the table even if they fell that far.

The answer? They don’t. At least at first glance. However, Warren’s play may be to get in on the ground floor with Amazon during a time in which when streaming is further catching up with linear cable. That hasn’t happened yet despite Amazon’s NFL ratings success this season with “Thursday Night Football.”

One industry observer compared the level of potentially available content equal to what is currently shown weekly on the Big Ten Network. Think about games like California vs. Rutgers, Northwestern vs. Stanford and Oregon vs. Indiana. (As CBS Sports reported last week, the newest media partner would not get any games involving Michigan, Ohio State or Penn State.)

For a partner like Amazon, would paying something like ~$500 million over six years be worth it just to get their foot in the door with the Big Ten? It made sense for Amazon to outbid CBS or NBC for the afternoon or primetime packages, because you’re at least getting a high pick, a good game, and quality teams. Amazon wouldn’t be getting those benefits if they were getting such a low pick, especially if those high profile teams were off the table. Even if a school like Wisconsin or Michigan State was playing well and not playing one of those three teams, it would seem likely that CBS, Fox, or NBC would just pluck their game, especially if they were secure in the knowledge games involving Michigan, Ohio State, and Penn State were off the board.

Something I also found interesting was Dodd’s reporting of the valuation of the Pac-12’s media rights compared to the value of this hypothetical package. As quoted earlier, he placed a label of under $100 million on the potential extra Big Ten package. He also reported that the current ten-team Pac-12’s media rights value is between $24 million and $30 million per school, so between $240 and $300 million per year. If you’re Amazon, ESPN, or whoever, would it make more sense to pay for the sheer quantity you’d get from the Pac-12’s media deal, or to get a foot in the door with the Big Ten on a smaller, less enticing package?

Personally, I think there’s a lot more value in knowing you’re going to get Oregon-Washington every year as opposed to potentially getting stuck with a lesser game like say, Purdue-Nebraska on the same weekend as a marquee ex-Pac-12 game.

Given all this uncertainty, it’s no wonder that the Pac-12 wants to get a TV deal done sooner rather than later.