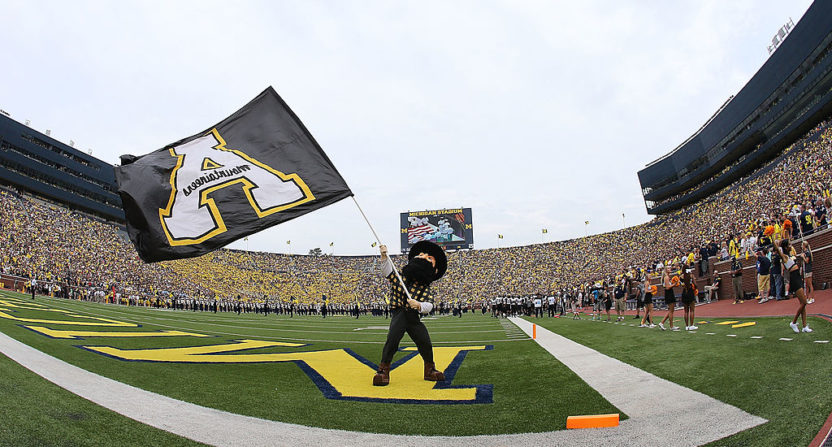 The Big Ten’s ban on scheduling FCS schools didn’t last long. In fact, it never got off the ground.

While announcing the league’s new media rights deals with Fox and ESPN today, league commissioner Jim Delany revealed that the Big Ten was going back on their resolution to leave FCS teams off the schedule.

It was just two years ago that the Big Ten pledged to not schedule any future games against teams from the division below FBS in an effort to strengthen teams’ out of conference schedules and add a ninth conference game. The Big Ten also mandated a non-conference game against a fellow Power Five conference opponent. At the time, it was the most ambitious conference scheduling policy, but it’s already been adjusted.

Delaney said on Monday that teams were already playing out existing contracts with FCS schools and that because of the imbalance of the nine game schedule, Big Ten teams would be permitted to schedule a home game against FCS opposition.

In one other bit of news, Delany confirmed an adjustment to the league’s scheduling philosophy that emerged last week in an interview with North Dakota State athletic director Matt Larsen. Larsen told The Forum of Fargo-Moorhead that the Big Ten will once again allow its members to schedule games with FCS opponents. Delany confirmed this, adding that it can only be done during seasons where a team plays four conference home games.

Delany was clear about the league’s intentions when it decided two years ago not to allow FCS teams on schedules. However, there were some unforeseen consequences.

While it doesn’t seem like a huge deal on the surface, it does have an impact on several players in college football. In recent history, the Big Ten hasn’t averaged nearly as many games against FCS competition as some of the other power conferences. From 2007-2016, they ranked in the middle of the pack in FCS games by the power conferences at 91 with the ACC and SEC leading the way with 133 and 122 games respectively. The SEC has routinely drawn eyerolls from college football fans around the rest of the country for their mid-November Cupcake Saturday when national powerhouse programs like Alabama and Florida take on the likes of Chattanooga and Presbyterian. Seriously, those are real games that count.

By relenting on scheduling FCS teams, the Big Ten loses a bit of the moral high ground argument in their schedule making. They also might give back an advantage when it comes to a strength of schedule argument when its teams are before the College Football Playoff committee. After all, that was the whole point in toughening up the non-conference schedule in the first place. Then again, as SB Nation points out, as Penn State lost to Pitt last year in their high-profile non-conference matchup, Washington was cruising to victories over Idaho and Portland State of the FCS. However, Washington got in and Penn State was left out.

The biggest loser though might be the Big Ten’s network television partners, specifically their own network. Somebody is going to have to televise the Big Ten-FCS matchups and it’s not likely to be Fox or ESPN. Instead, those lower-tier games usually always end up on the conference-affiliated networks. Games like Towson-Maryland or Morgan State-Rutgers are hard to sell to anybody outside the most fervent diehard fans of those programs. Come to think of it, they are probably hard to sell to the diehard fans as well. Stronger schedules across FBS would be a big win for the networks, the programs, and the fans, especially when it comes to non-conference games.

For fans of FBS schools, games against FCS competition are ones with little upside. Lose and it can be a gutpunch to your entire program, win and everyone will poke holes in it and say that it doesn’t matter.

The biggest winner in this move? It has to be the FCS schools themselves. It’s no secret that many FCS schools depend on huge paydays from making visits to FBS programs to help meet their budgets for the year. Florida State head coach Jimbo Fisher has even openly talked about Power Five programs having an obligation to play FCS teams to help the sport at the lower levels and spread the wealth a little bit.

Not only are the games financially viable to FCS schools, but it also gives them a platform that they just can’t receive otherwise. And not all the games are complete afterthoughts, either. Big Ten teams went 5-2 against the FCS last year with the most significant result being North Dakota State’s victory over Iowa, who was one season removed from the Rose Bowl. Then there was maybe the biggest result in the history of FCS football, Appalachain State’s 2007 victory at the Big House versus Michigan.

Those moments come few and far between, but they are memorable moments nonetheless. If Appalachain State didn’t have that victory over Michigan, would they be a member of the FBS today? If North Dakota State can keep notching wins over Big Ten competition, who knows, maybe Jim Delany becomes so enamored by capturing the Fargo market that the Bison will eventually get an invite.