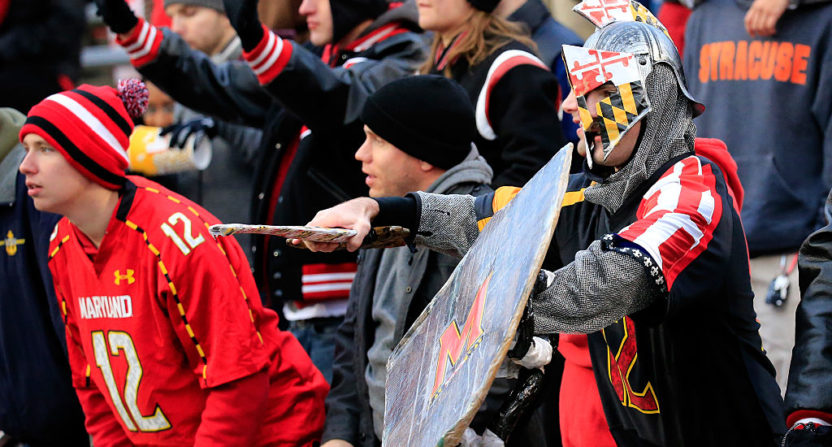 The Big Ten added Rutgers and Maryland in 2014. It was different than previous football additions. A Big Ten invitation was a rarified event. Penn State (No. 11) and Nebraska (No. 12) were storied programs with multiple national titles. Even Michigan State (No. 10) was coming off a 26-1 run and a national title in 1953. Rutgers and Maryland? The schools had combined for one top 10 AP finish since 1956.

Not surprisingly, the move has not worked out on the field. Rutgers has gone just 4-21 in conference play. Maryland, 8-17, has not been much better. Paradigms change quickly in college football. Maybe young D.J. Durkin gets something going with the Terps. But, the prognosis for neither program in a division with the great B1G powers is optimistic.

Maryland did bring along a solid basketball program, for what that’s worth. Rutgers, absent from the NCAA Tournament since 1991, has brought only embarrassing athletic department scandals.

How the teams fared has been irrelevant. The additions were never about the competition. It was all about money. Adding Maryland and Rutgers was a cynical ploy to add the large and growing New York and D.C. television markets to the Big Ten’s “conference footprint.”

The Big Ten Network gets millions of more subscribers paying the in-market fee of $1 per month on their basic cable packages. A “national” conference doing important things in populous East Coast cities is a better pitch to advertisers than snow, corn, and depressed manufacturing. This has been lucrative for schools with conference revenue ballooning. It has been lucrative for Jim Delany, due to receive a reported $20 million in bonuses, for amateur athletics administration.

Adding Rutgers and Maryland is a windfall if the cable model stays intact. As we’ve learned from the countless ESPN in decline pieces, that model is crumbling. Subscribers are leaving in a steady trickle. Technological innovation – fast, reliable Internet from another source – could break the dam.

We’ve reached the point where outrageous live sports rights figures will diminish. It’s hard to see ESPN or FOX shelling out stupid money for college football today, much less in five or six years. The Big Ten negotiating a shorter TV deal to hasten the next round of negotiations no longer looks like a masterstroke.

A Big Ten Network reliant on active subscribers and ad revenue may not be viable in its present form. The network’s best bet would be bundling with Fox News (median age viewer: 68) for the future, which may not be a long-term strategy.

Cable’s death carries uncertainty. There’s no precise gauge of what will happen. What I can predict is there will be a profound shift toward quality of games vs. volume of games.

Whatever outlet is streaming college football games in the 2020s will not want the bloated buffet of games. The present model favors the conferences. ESPN and FOX need live sports content to get cable providers to carry multiple networks. That changes if you’re dealing with Apple or Amazon.

We could see a model where the ten best Big Ten football games per season are on Amazon Prime. The Big Ten is streaming the rest of its football package and almost all of regular season college basketball on its own.

Cable subscribers no longer matter in that scenario. Fans who watch do, the very fans the Big Ten blithely disregarded. Rutgers and Maryland become dead weight.

Those two schools dilute the product. They drag on attendance when they show up to Michigan, Ohio State, and Penn State. They drag on television revenue. Mich/OSU/PSU are playing Maryland and Rutgers vs. sellable games against Nebraska, Wisconsin, and Iowa. They are also two extra mouths to feed when it comes to distributing the diminished revenue Mich/OSU/PSU are producing.

Adding Rutgers and Maryland made short-term financial sense for the Big Ten. Making the product worse may have grave consequences in the intermediate to long-term when the Big Ten is courting active viewers rather than a cable footprint. Of course, those handling said consequences would not be Jim Delany and the present set of school athletics administrators.