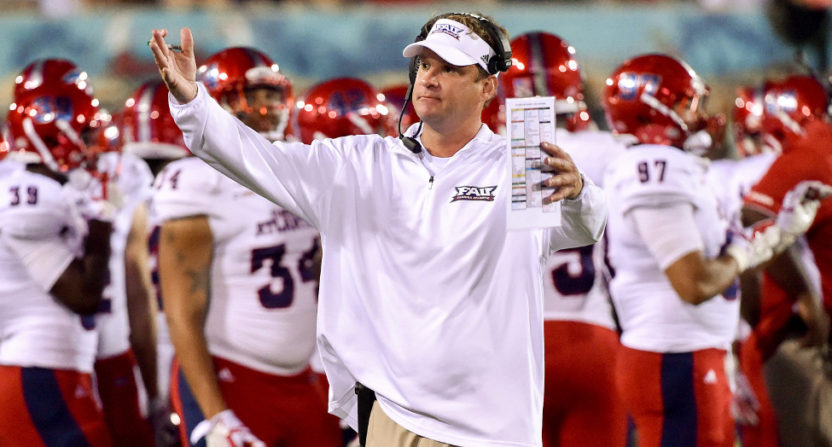 There’s plenty of speculation swirling that Florida Atlantic Owls head coach Lane Kiffin might be leaving for a Power Five conference job, with some reports linking him to schools like Ole Miss and Arkansas. For a moment Thursday, Kiffin himself appeared to provide some confirmation of that, with Little Rock ABC affiliate KATV sports anchor Kyle Deckelbaum reporting that Kiffin only gave dead air when a South Florida station asked if he would be the Florida Atlantic head coach next year.

Lane Kiffin was just asked if he will be the head coach at Florida Atlantic next season in an interview on Fox Sports 640 AM in South Florida. There was no answer. Just a long 10 seconds or so of silence, then the show went to break.

That tweet got a whole lot of attention, but Deckelbaum’s follow-up (which received less than one-fifth of the likes and retweets of that first tweet) indicates that this was a technical issue, not actual silence from Kiffin.

Apparently the audio cut out at quite a coincidental time. The host, Andy Slater, replayed the interview back after acknowledging everyone who heard dead air. Kiffin answered the question and said, "if they'll have me… I plan to be."

Khobi Price of The South Florida Sun-Sentinel confirmed that in an article, and provided a fuller version of Kiffin’s answer, but also mentioned that Kiffin didn’t appear live at Thursday’s FAU coaches show.

Appearing on Fox Sports 640’s Andy Slater Show show Thursday afternoon, Kiffin was asked if he would be the FAU coach next season. Kiffin responded, “I hope [FAU] still wants me here. I’ve never commented on coaching searches, but that’s the plan.”

…“I don’t comment on job searches, never have, and what’s going on with them,” Kiffin said. “So, not going to start now.”

Kiffin did not make his scheduled appearance at Thursday’s FAU coaches show, the South Florida Sun Sentinel confirmed with a source.

Kiffin taped his segment with ESPN West Palm’s Ken LaVicka from his office earlier on Thursday, a source said. His prerecorded segment played during the weekly radio show held at Biergarten Boca Raton. It was not the first time his segment was taped in advance.
A Conference USA representative was on location to discuss Saturday’s championship game, and tight end Harrison Bryant and linebacker Rashad Smith spoke as scheduled.

As Price notes there, that’s not the first time Kiffin has pre-taped something for the coaches’ show. But this one is getting some more attention giving the talk swirling around him. And it’s certainly notable that Kiffin’s “I plan to be” still at FAU is a lot less definitive than “I will be,” especially when paired with his lack of comment on coaching searches. However, “I plan to be” is a much better answer than leaving dead air, and it’s not Kiffin’s fault that his answer wasn’t initially heard on air. That’s a hell of a time for a technical issue to pop up, though.