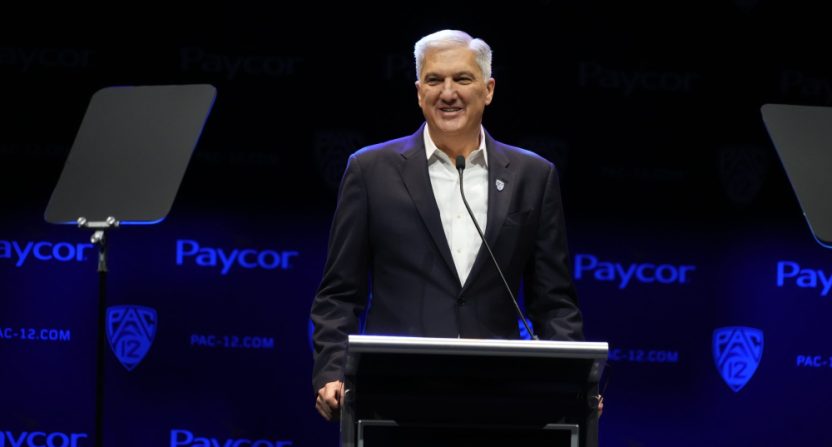 LOS ANGELES — If the inundation of coverage focused on television media rights in college sports annoys you, it seems you have company in Pac-12 commissioner George Kliavkoff.

Responses ranged from short to feisty, the latter of which provided the kind of snippets that make for good social media and soundbite fodder.

It. Is. On.
Pac-12 commish George Kliavkoff about Big 12’s Brett Yormark’s comment about Big 12 is open for business. “I appreciate that. We haven’t decided if we’re going shopping there or not”

Now, Kliavkoff’s quip about “shopping” a Big 12 Conference “open for business” was hardly unprompted — and not exactly unprovoked. Since the announced departures of USC and UCLA for the Big Ten and its deep Fox Corp. coffers, Pac-12 football has been more of a punching bag than usual.

Popular speculation suggests the Big Ten and SEC are building a two-conference fiefdom monopolizing college football. The first question directed at Kliavkoff was about that very speculation.

“No one has ever argued that the remaining 10 members of the Pac-12 don’t deserve to be in the [College Football Playoff],” Kliavkoff fired back. “I’m not going to [entertain] that question.”

A redux of Larry Scott’s buzzword-rich filibusters, this wasn’t.

Kliavkoff took over as Pac-12 commissioner in 2021, tabbed in part to because he wasn’t Scott. Kliavkoff’s predecessor Scott tended to address questions about the conference’s media struggles and the impact those struggles might have on the league’s future with a wooden, sometimes verbose style.

The contrast could accurately be compared to the differences between Silicon Valley — from which Scott took stated inspiration in his vision of the conference — and Las Vegas, where Kliavkoff worked before coming to right the Pac-12 ship.

The commissioner probably doesn’t want to go full Ace Rothstein, but Kliavkoff lamented that “the last month that has changed” college football behind the scenes in a way that damages the sport’s “collegiality.

“I hope that we regain that collegiality,” he added. “Because I actually think that’s the way that you solve problems. I know I’m going to put myself out there to be as embracive and inclusive of my colleagues as I can be to try and move us forward. I think it’s unfortunate if we go the other direction.”

After Kliavkoff was asked if the conference would support USC or UCLA should they qualify for the Playoff in the next two years — a question that elicited one of the commissioner’s short answers — Hanks interjected:

“It’s no different than our friends at the [American Athletic Conference] when Cincinnati made the CFP,” he said. “They made it as AAC members. They got the benefit. Quite frankly, they deserved it. It’s no different.

“Our [Los Angeles-based] schools are Pac-12 members. We’re going to treat them accordingly and proudly,” he added.

That’s no given. There have been leagues in this era of TV-driven realignment that have barred outgoing members from claiming conference championships.

But then, money creating conflict is a story as old as human history.

Money has long been the engine driving college football. However, the fracturing of media that began with the proliferation of the internet and accelerated in the streaming age has put a particular premium on the reliability of sports, and especially football, to attract audiences.

Networks have never invested more in the sport, yet the current atmosphere feels like one of desperation; administrations hording what they can before a bubble bursts. In doing so, are they ironically ensuring a burst by alienating viewers tired of the emphasis placed on revenue?

That’s a question, like some of those lobbed at Kliavkoff about realignment, that can’t be answered just yet. It is a question the sport’s power brokers need to take into consideration.

To be clear, college athletic programs switching conferences is a whole different issue from the criticisms made of LIV, the latter of which is far too complex to dig into in this space while giving it the gravity it demands. Tedford’s point, however, was that both are motivated wholly by money.

Money has perhaps always been a part of college football, but becoming the only thing at the expense of everything that makes the sport unique — historic bowl games, longstanding rivalries and traditions — saps the joy.