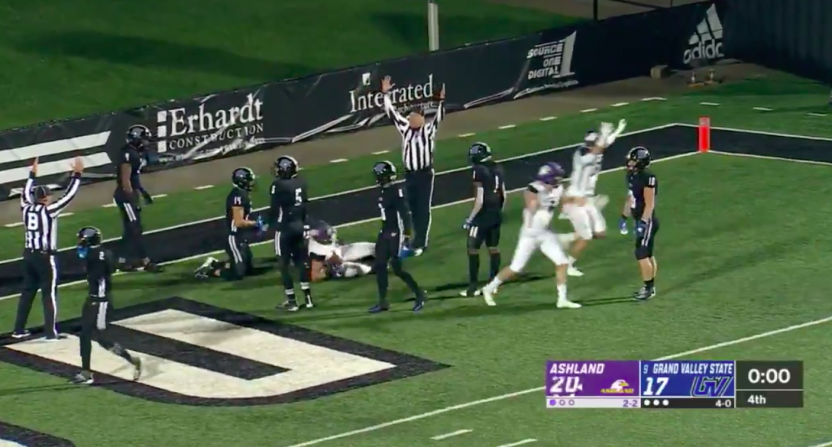 We’re going to presume you didn’t catch this Saturday’s Division II game between the No. 9 Grand Valley State Lakers and Ashland Eagles. So we’ll also presume you didn’t see how the game ended, where Ashland quarterback Austin Brenner threw a 52-yard Hail Mary touchdown pass as time expired for a 20-17 victory that stunned the ranked Lakers and their home crowd.

It’s also possible that the announcer calling the game wasn’t watching either. Or at the very least, he might not have been paying attention. Because considering what he’s witnessing, this might just be one of the most lackluster Hail Mary calls in the history of American football.

This has gotta be the LEAST-enthusiastic call of a game-winning hail mary…everpic.twitter.com/71DKFjHFsZ

Even Joe Buck is thinking “this guy needs to amp it up a little.”

if you want to actually get a sense of how exciting that moment was, check out Ashland’s video of the catch and the ensuing celebration.

The game was broadcast on ESPN3 and they tend to use local talent for these kinds of broadcasts, so you might expect the play-by-play announcer to be connected to Grand Valley State in some way. In fact, the voice behind the mic is Tom Cleary, the literal football announcer for Grand Valley Sports Network (who called the game alongside former GVSU tight end Bob Mitchell). So in that sense, it’s not the wildest thing in the world for him to have an underwhelming call as he watches his school lose in heartbreaking fashion.

However, the ESPN3 broadcast is, in theory, expected to be impartial. Not everyone tuned in to watch a Grand Valley State-sided broadcast. So there is an expectation that an insane game-ending play will warrant some kind of exciting call to match, even if the person behind the mic comes in with an appreciation for one side over the other.