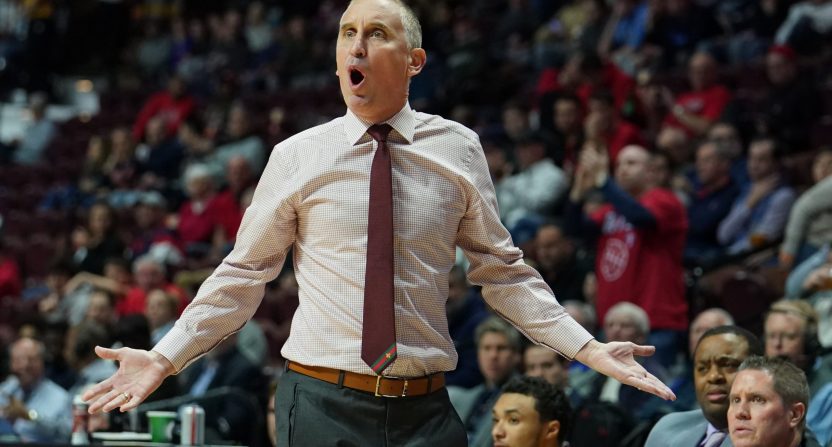 On Wednesday night, Arizona State beat Prairie View A&M 88-79 in a riveting game of hoops on the Pac-12 Networks. The two teams combined for 56 fouls and went to the line a total of 84 times, while also committing 33 turnovers. The game was, for lack of a better phrase, bowling shoe ugly.

On Thursday, Sun Devils head coach Bobby Hurley revealed that he had watched the game back on the Pac-12 Networks, and was not too happy with the broadcasters calling the game (Barry Tompkins and Don MacLean). Specifically, Hurley called out the negativity from Tompkins and Hurley towards the players, the officiating, and the game as a whole.

ASU coach Bobby Hurley went home and watched the Pac-12 Networks broadcast of ASU’s win over Prairie View A&M. He was not happy with what he heard. pic.twitter.com/2HeuHB4RGt

Here’s a transcript, via the Arizona Republic, including some quotes that aren’t in the above video.

“I thought it was poorly done by the telecast. There was a lot of sheer negativity said about the game and I think two teams that were competing hard,” Hurley said. “There were a lot of free throws that were shot in the game which made it a difficult game to navigate through. I have a job to coach the game and the people doing the game have a job of presenting the game. Talking about it, talking about student-athletes and the game itself in the most positive way.”

“Disappointing to see that again from the Pac-12 Network. Just to be fair. Prairie View A&M plays as hard as any team. I said that going into the game but the facts are the facts,” Hurley said. “This isn’t like an anomaly that they fouled us a lot and we went to the free throw line 51 times. Consequently the way the game was played we put them on the free throw line 33 times so they got a lot of free throws as well.”

“I’m sorry the game didn’t deliver what everyone wanted in that regard but I don’t think anything was mishandled by the officials. I thought the officials appropriately called the game the way it was supposed to be called,” Hurley said. “I know it’s not been my whole way to protect the officials but it’s my duty today to protect them. I think doing the best job to handle that game and how hard two teams competed.”

“It was almost to the point where are you doing us a favor by doing the game or are young going to report what’s going on and not feel like you want to go have dinner or are we going to be here till breakfast,” Hurley said. “Comments like that don’t sit well when you have teams that are fighting and competing as hard as we were.”

On Friday, the Pac-12 Networks responded (sort of) to Hurley, and said they “will address [his comments] internally”.

#Pac12 Head of Communications Andrew Walker on Bobby Hurley's criticism of the P12Nets broadcast team: "We are aware of the comments by Coach Hurley and will address internally."

I wouldn’t expect anything other than Hurley to go to bat for his players. But complaining about a game’s broadcasters being critical of the quality of the game and the officiating of the game seems a bit much to me. And the fact that this game aired on the Pac-12 Networks, instead of a national partner like Fox and ESPN, shouldn’t change the tone of the commentary. If you’re constantly painting the conference and its teams in a positive light, the announcers will then be accused of being conference homers (or possibly even worse, depending on what exactly they’re defending).

But when a coach publicly calls out the conference-owned network like this, the network can’t just pretend nothing happened. I doubt Tompkins and MacLean will actually be disciplined, but I’d also be surprised if they’re on the call of any more Sun Devils games in the near future.