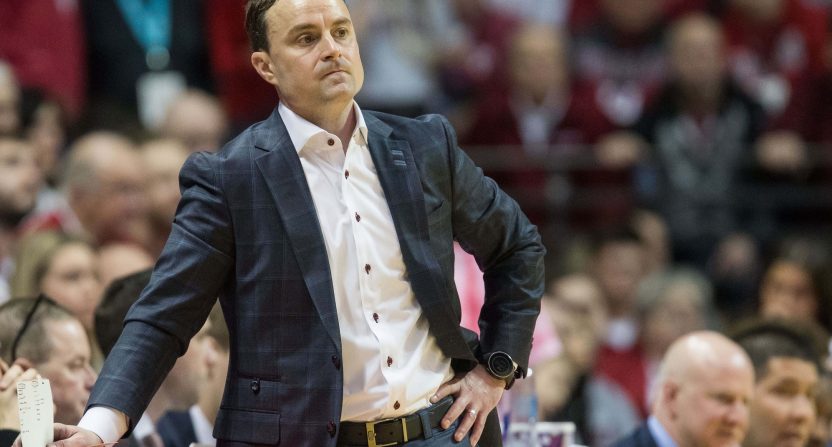 Indiana lost a tough 60-56 game to Wisconsin Saturday afternoon on senior day at Assembly Hall. A win would have certainly guaranteed a place for the Hoosiers in the NCAA Tournament, although even with the loss they still seem very safe thanks to a complete absence of bad losses and a whole lot of Quad 1 victories.

Indeed, entering Saturday, Indiana appeared in all 108 bracket projections that are currently updated in at Bracket Matrix, with an average seed of 9. A notable exception to that was Joe Lunardi’s ESPN Bracketology, which had Indiana in the “last four in” section heading into today’s game. That narrative also just so happened to be heavily featured on ESPN throughout the broadcast.

During Indiana coach Archie Miller’s postgame press conference, the subject of bracket projections came up and Miller didn’t hold back on his thoughts, comparing the world of bracketology to Sesame Street and delivering a lengthy monologue as to why he feels very confident in Indiana’s at-large chances.

"When I was in the Atlantic 10, Joe Lunardi was my best friend…"

“When you start to go through the bracketology and you listen to the Sesame Street cartoon guys on TV who need people to click, the bottom line is strength of record. Who’d you play, and who’d you beat? And if you look at our wins there’s very few teams in the country that can say they’ve beaten Florida State, Michigan State, Ohio State, Iowa, Penn State, who clearly are in the field. So if you’re beating six, seven teams in the field you should be in the field.

I don’t know if that answered it. That was a lot. I needed to get something out. You know when I was in the Atlantic 10 Joe Lunardi was my best friend, he used to help me all the time. When I went to Indiana…he needed to crap on Indiana the other day just so people would watch Sesasme Street, you know what I’m saying?”

That video, and others of the presser, sadly cuts off right before the money quote on the way out, which means we can’t get Miller’s tone. UPDATE: Okay, here it is.

Here it is. Wait until the end. After long rant about Indiana's tournament resume, Miller shared his thoughts on Lunardi have the Hoosiers as one of the "last four in" @WDRBNews pic.twitter.com/mcrQ3PZjez

Archie Miller's official press conference wraps up, then bonus content: "When I was at Dayton, Joe Lunardi was my best friend. Now he needs to crap on Indiana so everyone will watch Sesame Street. Go back in the trash can you came from." #iubb https://t.co/kby3qvlscK pic.twitter.com/cXI79AbllO

Of course, even with video, Miller is fairly tough to read. I asked around to people who were in the room, they couldn’t tell either. So, what should we take away? It’s not unfathomable that Lunardi has seen spikes in traffic when he puts Indiana in more danger than they appear. He’s also not exactly at the top of the bracket projection accuracy standings, which Lunardi recently attributed to the pesky television commitments involved that prevent him from the hours of study he’d prefer to be doing.

But of the two parties, Miller has a much more obvious agenda: lobby for his team. Indiana hasn’t made the NCAA Tournament since 2016. Tom Crean’s final season, followed by Miller’s first two years, all ended without a bid.

Losing to Wisconsin also means Indiana likely has to win its first Big Ten Tournament game to feel completely safe. Since it’s going to be against either Northwestern or Nebraska, a loss to either team would easily be Indiana’s worst of the season, and undercut the “no Quad 3/4 losses” part of their case. The last thing Miller wants is for his team to feel that pressure from the outside as well.

Still, it’s not every day that a high-major coach figuratively puts Joe Lunardi in a trash can while mocking an entire sports media subgenre. Adding in a Sesame Street Muppets impression simply puts it over the top.