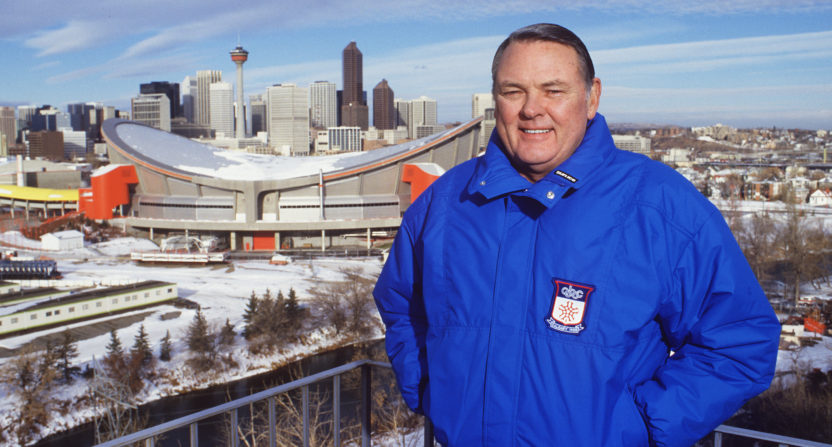 The death of sportscasting giant Keith Jackson last weekend saddened many fans who watched him call so many great moments. While Jackson was mainly associated with college football, he also called baseball, basketball, boxing, NASCAR, the NFL, swimming and so many other sports.

He was at the mic for all seven of Mark Spitz’s gold medal races in Munich, Germany during the 1972 Olympics, as well as all five of Eric Heiden’s gold medals in speedskating at the 1980 Winter Olympics in Lake Placid, New York. Jackson was the original announcer on Monday Night Football in 1970 before giving way to Frank Gifford a year later. He called the NBA on ABC with Bill Russell in the early 1970s. And he was at Yankee Stadium when Reggie Jackson hit three home runs in Game 6 of the 1977 World Series.

Jackson’s booming voice was perfect when a big moment required a big call. In college football, his voice was ideally suited for the setting, whether he was in Tuscaloosa to call a game involving Alabama coach Bear Bryant, in Ann Arbor for the storied Ohio State-Michigan rivalry or in the Sunshine State for Florida State-Miami.

Because he called so many events for ABC, he seemed to be a comfortable fit no matter what sport he called, but it was college football with which we associate Jackson the most.

Let’s take a look at some of Jackson’s best moments and a few examples of his catchphrases:

Jackson covered a plethora of sports for ABC over a span of 10 Olympiads. Whether it was basketball, ski jumping, swimming, speed skating or track and field, Jackson did them all well.

In 1976, ABC was in Montreal for the Summer Olympics. Jackson called track and field and here’s his call of the 400 meters in the decathlon with Bruce (now Caitlyn) Jenner in the event:

This is Jackson calling the first of Edwin Moses’ two gold medals in the 400-meter hurdles. Moses would win again in 1984. And yes, that is O.J. Simpson as the analyst:

Here’s Jackson at the 1980 Winter Olympics calling the 500-meter speed skating finals with Sheila Young Ochowicz. Notice that unlike current Olympics where the event is held inside, the speed skating in 1980 was run outside.

Over to 1984, ABC aired the Winter Olympics from Sarajevo, Yugoslavia. Jackson covered ski jumping. Here’s how ABC covered the event with Jackson on the call on the 90-meter jump. Jay Rand was his partner.

Later in 1984, the Summer Olympics were held in Los Angeles and Jackson called basketball. With the USA team loaded with Michael Jordan, Patrick Ewing, Sam Perkins, Chris Mullen, Steve Alford and coached by Bob Knight, Jackson rode a wave that led the team to a gold medal. Here’s a portion of the gold medal game between Team USA and Spain.

ABC’s Wide World of Sports was the original sports anthology series on television. It aired a whole bunch of different events including cliff diving, surfing, arm wrestling, barrel jumping and others. Wide World brought Americans their first look at the NCAA Tournament, the Daytona 500, the Indianapolis 500, Wimbledon and other international events.

Here’s Jackson narrating the New York State Volunteer Firemen’s Competition in Syracuse, New York. I remember watching this. Jackson played it straight, knowing that these men wanted to win. He did have some fun, especially in the introduction.

After ABC lost the NBA to CBS in 1973, ABC needed programming on Sundays during the winter months. It created a sports competition (called “trash sports” by critics) that became known as “The Superstars.” It brought together athletes from baseball, basketball, football, hockey, racing, boxing and other sports into one competition. The competition included rowing, running, cycling, weight lifting, swimming and the obstacle course. “The Superstars” would be held in January in Rotonda, Florida over a few days and be run in weekly installments.

The ratings were so good that “The Superstars” regularly beat the NBA on CBS and the NHL on NBC.

Starting in 1974, Jackson became the regular announcer before he eventually was re-assigned due to his baseball commitments. (We’ll get to those later.)

Here’s the 1976 “Superstars” final and the introduction with the athletes. The music is from Jesus Christ Superstar.

And here’s the final event of the 1976 final, the obstacle course. Reggie Jackson was the sideline reporter:

Jackson called Chris Chambliss’ walk-off home run in the 1976 American League Championship Series to guide the New York Yankees to the World Series over the Kansas City Royals. Howard Cosell was there too.

In 1977, Keith Jackson was at the mic for Reggie Jackson’s three homers in Game 6 of the World Series. Cosell was also there.

Here’s Jackson introducing Monday Night Baseball in 1979, as the California Angels took on the Boston Red Sox. You’ll like the theme music.

In 1981, the New York Yankees took on the Los Angeles Dodgers in the World Series. Jackson did the introduction:

Jackson had one season on the NFL as the original play-by-play announcer on Monday Night Football in 1970. He was replaced by Frank Gifford and found out when a reporter approached him and told him he was no longer on MNF.

Here’s the very first MNF game between the New York Jets and Cleveland Browns. Keith Jackson, Howard Cosell and Don Meredith were the original trio and I love this MNF theme. It’s so 1970s. And notice the cigarette ad in the billboard, something you would never see today.

And here’s the second MNF game, the Kansas City Chiefs at the Baltimore Colts:

Of course, Jackson was best known for college football and we’ve saved the best for last.

One of my favorite moments was the 1979 Sugar Bowl between Penn State and Alabama. The Nittany Lions recovered a fumble deep in Crimson Tide territory and appeared to be ready to tie a 14-7 game. But the Crimson Tide’s defense held on a tremendous goal line stand. Jackson and former Arkansas coach Frank Broyles called it. Jackson and Broyles formed a great broadcast team.

Let’s go to 1991 when Florida State was at home taking on Miami in Tallahassee. The Seminoles were favorites for the national title, but they were having trouble with the Hurricanes in this game. The ‘Noles seemed to be driving for a winning field goal when Gerry Thomas pushed it… wide right. Bob Griese is Jackson’s partner.

So if you have Wide Right I, you have to have Wide Right II in 1992. This time, the Seminoles tried for a tying field goal at the Orange Bowl in Miami and it went… you know. Go to 1:33 for the attempt. Jackson tried to give some hope to Seminole fans at the end, “Folks, it’s a game. The sun will come up in the morning right on schedule.”

In 1994, Jackson was at The Big House in Ann Arbor for Colorado at Michigan. Kordell Stewart threw a Hail Mary pass to Michael Westbrook and his call of “INCREDIBLE!” was perfect:

Here’s Keith doing the introduction for the 2003 Michigan-Ohio State game.

His last game was the 2006 Rose Bowl, USC vs. Texas, the national championship game. His introduction was tremendous. Jackson’s last broadcast partner was Dan Fouts.

And there’s “Invinceable!” for Vince Young, although Dan Fouts said it.

And we’ll end with a Miller Lite ad with Keith Jackson doing his signature, “Whoa, Nellie!”

We’ll miss Keith. These are just some of his highlights. We haven’t even broached his time calling the USFL and college basketball on ABC. Jackson was a true sportscasting legend and his impact on the sports he called is immeasurable.