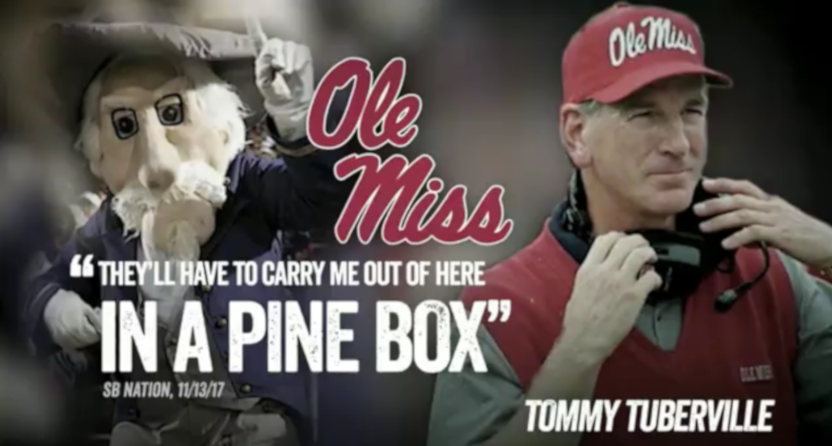 Whether former Ole Miss, Auburn, Texas Tech and Cincinnati head coach (and brief ESPN analyst) Tommy Tuberville is a worthy U.S. Senate candidate (Tuberville, running as a Republican candidate, is facing Democratic incumbent Doug Jones this November) is beyond the scope of this site. But it’s certainly interesting that there was a national ad from Jones’ campaign that aired on CBS’ SEC coverage (the Texas A&M at Alabama game) Saturday, with that ad criticizing Tuberville’s coaching history. And it’s definitely notable that that ad cited a SB Nation piece from 2017 rather than one of the original 1998 pieces with Tuberville’s quote from his time at Ole Miss of “They’d have to carry me out of here in a pine box.”

That quote came a few days before Tuberville left the Rebels to take the head coaching job at Auburn. And yes, it absolutely makes some sense to cite that quote in an ad campaign going after Tuberville. But it’s funny to see the ad citing a 2017 piece referencing that quote rather than a 1998 piece with that quote. (The commercial then goes on to reference Tuberville’s exits from Auburn and Texas Tech.) Here is the ad in question:

It’s fascinating that ads against Tuberville are referencing a’1998 quote from him, and it’s perhaps even more interesting that those ads are referencing decades-later citations of the initial quote. Of course, some of that is about archive issues in the internet era. Even detailed Google searches at the moment tend to turn up pieces referencing that 1998 quote rather than original pieces from that time.

But you’d think that an actual campaign ad probably could have spent the resources to find a printed newspaper from that time with that quote instead of citing a blog post referencing it from almost two decades later. Even the first page of Google results for “Tommy Tuberville pine box” includes a 2007 Decatur Daily piece from Ross Dellenger (now at Sports Illustrated) referencing those comments. And while that in itself isn’t a perfect citation either, it at least has a decade on the SB Nation piece this ad decided to cite.

It’s not in dispute that Tuberville made the “pine box” comments. Those remarks happened, and the college football world has been talking about them ever since. But it is funny that an official campaign ad criticizing him decided to cite a SB Nation piece from 2017 referencing that 1998 quote instead of one of the many outlets that printed it at that time. (And we look forward to future ads referencing this 2020 piece on that quote instead of the original quote from 1998.)