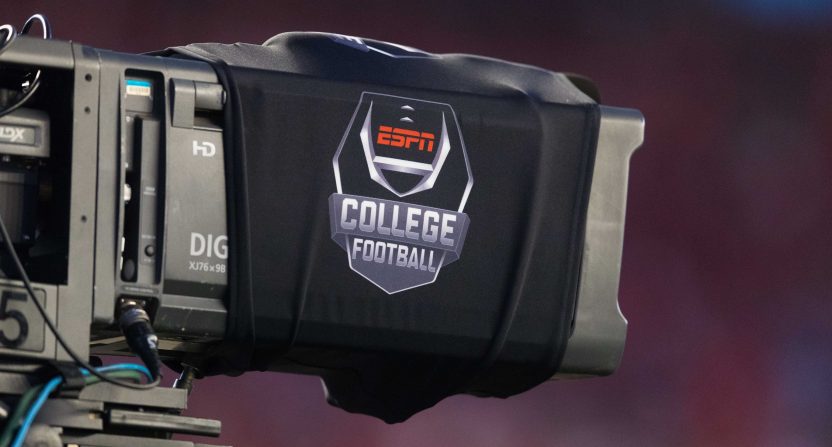 A landmark Supreme Court decision almost 40 years ago helped lay the groundwork for college football’s ongoing transformation – and the justice who dissented was the only college football star ever to serve on the highest bench.

In 1984, the Supreme Court upheld the United States Court of Appeals for the Tenth Circuit decision that in controlling college football television rights, the NCAA violated the Sherman Antitrust Act.

The case – National Collegiate Athletic Association v. Board of Regents of the University of Oklahoma – permitted individual athletic departments to negotiate their own broadcast contracts independent of the NCAA. A true deluge may not have begun until a generation or so later, but the case opened the proverbial floodgate for television to dictate college football’s direction.

Assorted milestones in the 153-year history of college football all contributed to ushering the game where it finds itself today – with two schools in Los Angeles, USC and UCLA, joining a Big Ten Conference in which the nearest current member resides 1,500 miles to the northeast. Meanwhile, television network money funds the moving trucks.

College football, and thus college sports as a whole, nears a reality in which the dominant conferences are less the “Big Ten” and “Southeastern” – made up of neighboring and like-minded institutes of higher learning – so much as they’re brand names and subsidiaries of FoxCorp and the Walt Disney Company.

Adding USC and UCLA to stretch the Fox-partnered Big Ten from the Pacific to the Atlantic erases any lingering connection to the regionality and cultural identities that had shaped conferences. The endgame is to create a television product that can attract the most viewers and sell to advertisers for the highest asking price, period.

No one milestone is more important in establishing TV’s hold on the sport than the ‘84 SCOTUS decision. Dissenting opinion came from Justice Byron White, the Supreme Court’s only college football All-American, which perhaps offers some insight into the negatives of this new order.

Justice John Paul Stevens wrote on behalf of the 7-2 SCOTUS majority, invoking business-world language reflective of an antitrust case; “competition in the relevant market,” “deviations from the operations of a free market,” etc.

White’s dissent challenged this college sports-as-business venture view. He defended the NCAA’s approach to TV rights as “reducing the financial incentives toward professionalism,” and viewed college athletics’ governing body as existing in a different plane than a corporation – like, say, professional sports leagues.

Writing off White’s general sentiment as a naively idealistic interpretation of college sports would be much easier if the opinion hadn’t come from one of football’s legendary figures.

Understanding White’s background from his illustrious career at Colorado offers some insight into his dissent. A standout halfback, White led the nation in scoring in 1937 with 122. Sportswriters nicknamed him “Whizzer” – a moniker that 1998 Dennis J. Hutchinson biography The Man Who Once Was Whizzer White reveals White actually disliked – that fit his style of play.

He was a ball-carrying dynamo, but also scored on special teams and even defense, most famously returning a pick-six in Colorado’s historic Cotton Bowl matchup with Rice.

His selection to assorted All-American teams, including the United Press squad and the Grantland Rice-helmed Collier’s lineup, makes sense in this context. However, it wasn’t so cut-and-dry.

Colorado played in the Rocky Mountain Conference, a league long ago rendered defunct – yes, conferences died long before TV’s intervention in the sport – and at the time, considered inferior.

Indeed, “Whizzer” White was an early target for one of college football fandom’s favorite refrains to this day: YOU AIN’T PLAYED NOBODY!

Rather than shouted on Paul Finebaum’s radio show, though, they were the opinions held as gospel by sportswriters like Rice, stationed in the population centers where Ivy League and Big Ten football ruled.

TV was in an experimental phase during White’s ‘37 campaign, but media played a central role in molding his All-American candidacy. Hutchinson details the rise of “Whizzermania” through the mediums of the time.

“Motion picture coverage of the game against Colorado College was suddenly scheduled by three newsreel organization[s], Fox-Movietone, Pathe and MGM, ” he wrote.

M’Lemore quipped that White was “in the headlines more than [President Franklin] Roosevelt.”

Considering White juggled his unprecedented level of play on the field with a Rhodes Scholar candidacy (which he was awarded in 1938) and duties as Colorado’s student-body president, it’s easy to understand why his story commanded such attention.

And, while TV may not have played a part, White himself became intimately acquainted with the media circus big-time college football attracted.

No other game, save Major League Baseball, was more vital than college football to growing the audience-engaging sports sections of first-half 20th-century newspapers. Hutchinson’s biography alludes to this with specific regard to White, quoting longtime Washington Post columnist Shirley Povich as saying, “I even wondered if [United Press] were trying to build their client base in the West” by naming White an All-American.

That wasn’t an unheard-of tactic. The Associated Press launched its poll in 1936, just one year earlier, with motivation to drive readership.

The medium may have changed, but college football’s place in media remains as true today: only the NFL is more of a proven winner for outlets looking to cash in on sports.

White lived it in one era, and he foresaw the direction it would go in another through a more far-reaching, immediate, and financially lucrative avenue in another era.

And while White’s legacy benefited from media coverage, he wasn’t hypocritical in his stance on college sports a half-century later.

Hutchinson recounts long before he was Byron White the Supreme Court Justice, Whizzer White the All-American Halfback delivering a speech against Colorado accepting its Cotton Bowl bid on the grounds that few of his teammates’ families could afford to make the trek to Dallas, and the Buffs had little left to prove after winning their conference.

Putting stock in a conference title; a novel concept that erodes with every move to centralize the sport around a wholly TV-driven playoff. But that’s beside the point.

A 16-15 team vote prompted Colorado to accept the Cotton Bowl invite. Ahead of the Classic, Hutchinson relays a story of White meeting briefly with a media throng and snapping in response to a reporter’s question about exams.

“I don’t think such things as football and scholarships should be mentioned in the same story,” the future Justice said.

Eighty-five years have passed since that statement, and it’s fair to say that not only sports fans and media are more cynical today; the general populace is more cynical.

White’s belief in the student-athlete concept as a player manifesting in his dissent as a judge presumably elicits a fair bit of scoffs and eye-rolling in the context of 2022. But in my own experiences asking around (https://pressbreak.substack.com/p/amateurism-name-image-and-likeness) among those in the game, there’s considerably less cynicism about the marriage of athletics and academics.

Something former Cal running back Patrick Laird said in 2018 resonates through both the lens of White’s 1984 dissent implying the professionalization of college football, and the 2022 transformation of the game into something more closely resembling the NFL.

“Once you become a professional at a young age, you’re an employee of the school – I think a lot of people don’t consider that,” he said. “There’s a lot of problems that come along with it.”

Problems that just might require the perspective of an insider of the sport to recognize; problems that Byron “Whizzer” White recognized as the lone justice from the college football world.