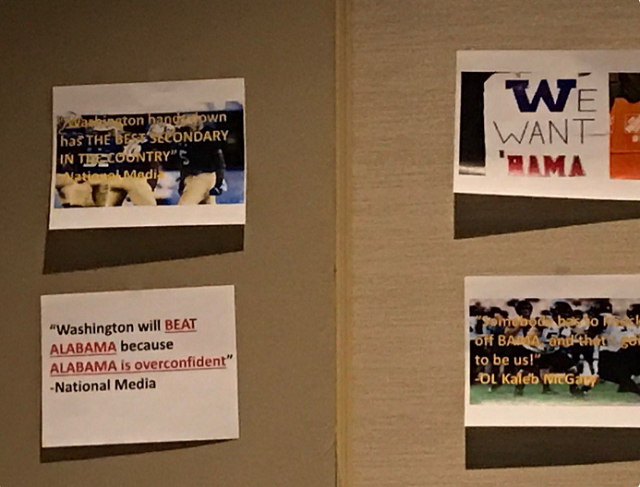 It’s not like Nick Saban and the Alabama Crimson Tide need much motivation anytime they take the field, and it would be especially strange if they needed extra motivation for a College Football Playoff semifinal. Apparently they do need it, as their locker room bulletin board material shows.

ESPN’s Holly Rowe shared this tweet before taking it down a few hours later on Friday (perhaps at Alabama’s request): 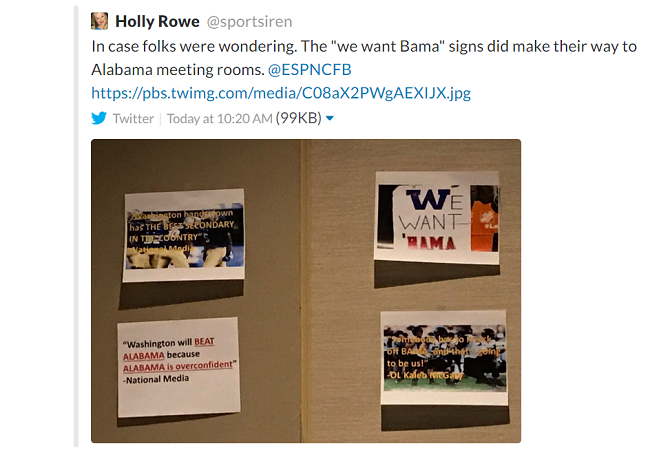 The “We Want Bama” signs are interesting enough, but “Washington will BEAT ALABAMA because ALABAMA is overconfident”, according to the “national media”? Who in the national media or otherwise has said anything like that in the lead up to the Peach Bowl, other than maybe an overconfident Huskies fan or two? And who else has said that Washington has the best secondary in the country?

But that’s not all. You can see in the bottom right of this picture that there’s a “quote” from a Washington OL Kaleb McGary that says “Somebody is going to knock off BAMA and that’s going to be us!”. Except for the part where that isn’t actually what McGary said. What he actually said was this:

Even the McGary quote has been altered. His actual quote: "Someone has to knock them off. Why not us?" https://t.co/fj8pYMH51W

One bizarre phenomenon from 2016 that needs to die a hard death in 2017 is believing in clearly fake quotes and stuff attributed to “national media” when almost no one in said media has doubted Alabama’s credentials or picked them to lose. Putting a generic “national media” stamp is, while still really stupid, not faking quotes at the very least.

Apparently Alabama needs fake quotes to motivate themselves to win a national semifinal game. It’s a good thing 2016 is almost over.