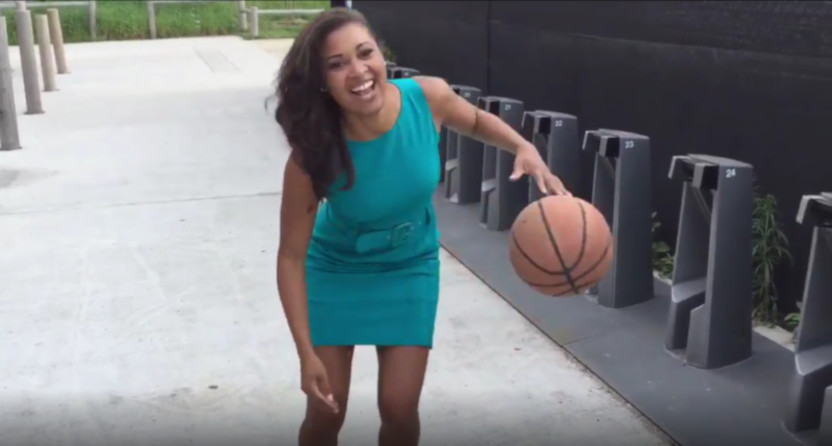 Back in 2018, AJ Ross joined CBS Sports following a TV news career with stops in Myrtle Beach, Columbus, Pittsburgh, Cleveland and New York City. Since then, she’s worked as a sideline reporter on CBS and CBS Sports Network coverage of the NFL, NCAA football, and NCAA men’s and women’s basketball, but 2021 is going to mark her first time working on CBS/Turner’s NCAA Tournament coverage. Ross will be working with Lisa Byington and Steve Smith for two games Friday, with Tom McCarthy and Avery Johnson for another game Friday, and with Andrew Catalon and Steve Lappas for three games Saturday. She spoke to Awful Announcing Wednesday, and said working on NCAA Tournament coverage is something she’s hoped for for a long time.

“It feels amazing. It’s a dream come true. I personally played basketball all my life, never made it to the big game, but even as a kid, I recall March being a month full of excitement and anticipation, glued to the TV. This was always something I aspired to and wanted to do one day. Since being with CBS, I’ve kind of planted those seeds and let them know my interest, and it’s amazing that they’ve given me this opportunity. I couldn’t be more elated and excited.”

Ross said basketball has always been a passion for her, dating back to her childhood.

“It just came naturally to me. I started playing at the Boys & Girls Club when I was five years old, and I felt like a fish in water. It was an intensity; I have pictures from a scrapbook that my parents put together that from day one, I was in very defensive lockdown mode. Whoever was the best on the other team, I wanted to guard them.”

“I was always the runt of my teams, I didn’t hit a growth spurt until my sophomore year of high school. I played point guard and just loved being able to see the floor, playing unselfishly, making sure that my teammates got great looks even before myself. But as a player, I really prided myself on ‘Who’s your best person? I want your best person.’ No matter how outmatched in size I may have been, they weren’t going to score on me. I just loved the thrill of it.”

She said a particular personal basketball highlight was winning a Pennsylvania state championship in high school.

“I was fortunate enough to get an academic scholarship, so I didn’t necessarily have to play a college sport for a scholarship. But in high school [at Oakland Catholic in Pittsburgh], I played for Suzie McConnell-Serio, who played in the WNBA and won several Olympic medals. [McConnell-Serio won gold with the U.S. team in 1988 and bronze in 1992; she would go on to coach in the WNBA and at Duquesne and Pitt.] We won state in Pennsylvania, and it was like playing on a college team in terms of the demands during the season and offseason. For me, I just wanted to experience other things in college, but then I got to college and I missed it. So I walked onto the women’s team at Howard.”

Ross only played briefly at Howard, leaving the team to spend more time with her father after he was diagnosed with prostate cancer (he’s now in remission and doing fine). But she said her passion for basketball has continued since her playing days, and she’s thrilled to get to cover the NCAA tournament and the athletes there who have devoted themselves to the game.

“I’ve been a lover of the game all my life. I really respect the men and women who have dedicated their lives to playing collegiate basketball, because it is a job. It is a full-time job, and you don’t necessarily get to do much else beyond being a student and being dedicated to your sport. And I’m so happy that these athletes this year, despite everything that’s happened in the past year, finally have this opportunity to show all the hard work that they’ve put in.”

Ross said she thinks her personal basketball experience has been incredibly beneficial to her work covering the sport, starting with her first job at ESPN.

“It goes in tandem. That’s not to say that you have to play a sport to know it, necessarily, but I know basketball like the back of my hand. Right out of college, I worked for ESPN and I was working on the NBA studio shows at the time, and because I could see the floor and understand plays and strategies and whatnot, they would always pair me with whatever guest coach was in studio at the time to help telestrate plays. Because I can just see things organically; I didn’t need the plays to be broken down, I could see them as they were unfolding.”

“So I think it’s just been an asset in my back pocket in covering the game. It’s a totally different vantage point, of course, not having the same pressure, and just being able to enjoy it and criticize and speculate like everyone else from afar.”

She said her time as a TV news reporter has also been useful experience for her, but she enjoys covering sports more.

“Having a news background, I think, is an asset for any journalist, because you hone your skills in research, and in developing different relationships and contacts. All those skills still transfer into the sporting arena. Obviously with news, it can be death and destruction sometimes, some very morbid content. With sports, there’s still this intersectionality where athletes are bringing a lot of issues into the main conversation of pop culture and politics and social justice, but at the end of the day, those stories can be more inspirational for a lot of us.”

“And sports, at least for me, I’ve always drawn these parallels and these metaphors to whatever challenges you may have in your life. It’s how you respond to that adversity. And with how athletes have been able to respond to different challenges and adversity, you can draw inspiration from that. I just enjoy that aspect of it personally more than the ambulances and so on that go along with news.”

Ross is seen above in a 2016 video from her time at WABC in New York, where she surprised people with a dribbling exhibition. She spoke to SLAM’s Anthony Gilbert about that back then. Here’s that video:

Don't judge a book by its cover, you don't know my story ? Couldn't resist when I found this ball ? @jstngun pic.twitter.com/5XTJWxDKUI

Ross has previously worked with Catalon on CBS’ NFL coverage, and said she’s thrilled to work with him and Lappas here.

“I’ve worked with Andrew quite a lot through the NFL season. Andrew is amazing. Actually, his wife [Jessica Layton] works for CBS News in New York, so she and I used to cross paths when I worked for ABC News in New York. It’s such a small world. And I can’t say enough about Andrew and his work ethic. One thing that I’ve really appreciated about him is no matter how hard you may study for a game, it seems he’ll always discover some interesting nugget or some factoid from somewhere. It’s not trying to outshine anyone else on the team, it just adds this helpful layer to the broadcast that makes it interesting or funny beyond your typical broadcast.”

“I feel challenged in a great way; it’s like ‘I want to be like Andrew when I grow up.’ I’m trying to figure out other things that I can bring to the table that aren’t in the media guides, things I can bring from whatever conversations I have with coaches and athletes that just add a different dynamic to whatever game we may be covering together.”

“And Coach, obviously, I can’t speak highly enough about his basketball IQ and the insight that he brings. So to be paired with both of them is an honor. And I’m hoping that we have a good time if nothing else, because it’s going to be intense.”

The 2020-21 NCAA season has presented a number of hurdles for sideline reporters, including distancing requirements and virtual prep meetings. Ross said while those precautions make sense in the pandemic environment, they do make the job harder.

“It has been challenging. We’re doing Zoom now; what would be our in-person meetings are now via Zoom, and we’re trying to schedule times where we’re not overlapping. And I do think that connectivity is somewhat lost. Even beyond the prep meetings, at the actual games, there’s being able to have that energy first-hand where we’re able to engage and be at practices and get a pulse for the huddles; everything’s at a distance this year.”

“I’m not at all complaining, obviously; safety is paramount. But it’s just a different time. That’s just the way the industry is going, and I’m just glad that we’re having a tournament and that I have the opportunity to cover it. At least we’re here.”

And Ross is pretty thrilled that she’s here.

“I’m taking it all in and taking it in stride. I feel very fortunate. I have three games on Friday and three games on Saturday, I have one through six seeds, so I’m getting a good mix of games. And as a fan, I’ve paid attention to a lot of these teams, so I’m excited that now I get to cover these incredible players and historic coaches firsthand, and just be on the front lines of history. It’s going to be cool.”

Ross’ first game is #1 Baylor vs #16 Hartford, at 3:30 p.m. Eastern on truTV Friday with Byington and Smith. Her full assignments can be seen in our announcing schedule here.