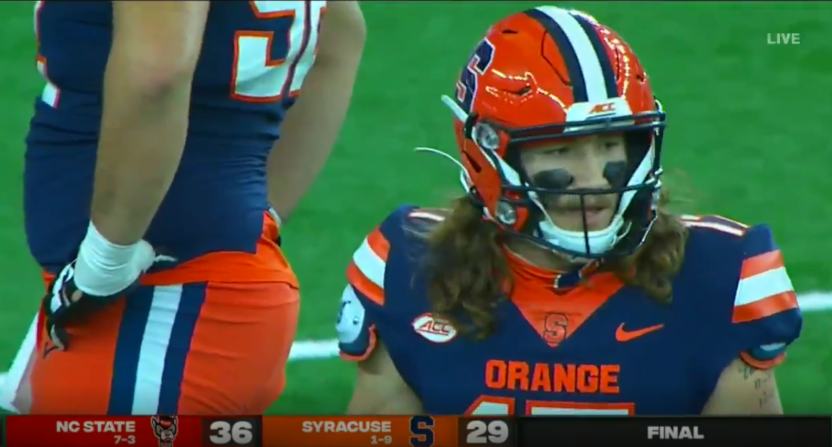 Contrary to the name of this site, Saturday’s finish to the North Carolina State Wolfpack-Syracuse football game featured excellent announcing, but awful in-game decision-making. Syracuse trailed 36-29 late inside the final 20 seconds, but had a chance to tie with a touchdown or win with a touchdown and a two-point converstion. And that chance still existed after Orange quarterback Rex Culpepper was sacked around the NC State 18 on third-and-goal; Syracuse had to hurry to get up to the line and get a play off, and they did, but Culpepper promptly spiked the ball, creating a turnover on downs and giving the Wolfpack the win. And amazingly, he did this right after ACC Network broadcast analyst Roddy Jones was discussing how they couldn’t spike the ball because it was fourth down:

Syracuse spikes the ball on 4th down, needing a TD to tie the game. ? pic.twitter.com/XJH8gTMl1O

The discussion there from Jones and play-by-play voice Wes Durham is great. Jones says “You’ve got to get back to the line,” Durham says “Orange will have to hurry quickly,” Jones says “Can’t spike it, you’ve got to go,” Durham says “It is fourth down…they get it snapped, and he spikes it. And the ballgame will end.” The broadcast then finds sad shots of Culpepper (seen above), and the microphones then pick up a very audible disappointed “Holy shit” from someone.

That’s just an incredibly unfortunate self-inflicted loss for Syracuse. But it was pretty funny to watch.