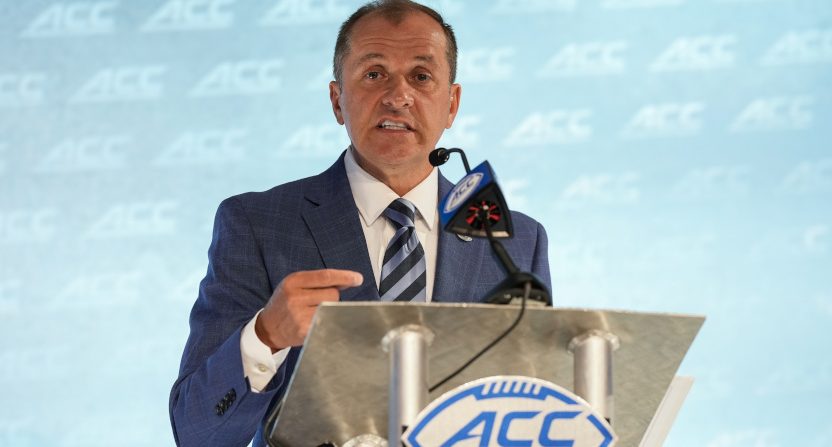 Big changes are coming to college football scheduling following the NCAA Division I Council decision last month to loosen restrictions on who can play in conference championship games, letting individual conferences determine how they’re going to handle that. That led to the Pac-12 quickly removing their divisional requirement for their championship game, which will be played between the top two teams by conference winning percentage going forward. That conference has not yet eliminated divisions altogether, though, and neither has the Big Ten (which has also discussed removing divisions). The big actual move there so far comes from the ACC.

The ACC announced Tuesday they’re wiping out their divisions beginning in 2023 and going to a 3-5-5 model for 2023-26. That will see each school with three annual opponents. They’ll play the other 10 league teams twice each during that four-year cycle, with one game against each of those teams coming at home and the other coming on the road. With divisions gone, the top two teams by conference winning percentage will compete in the conference championship game each fall. ACC commissioner Jim Phillips (seen above at last summer’s ACC Kickoff event) had more to say on that in a release (which also has the full list of each team’s conference opponents for 2023-26):

“The future ACC football scheduling model provides significant enhancements for our schools and conference, with the most important being our student-athletes having the opportunity to play every school both home and away over a four-year period,” said ACC Commissioner Jim Phillips, Ph.D. “We appreciate the thoughtful discussions within our membership, including the head football coaches and athletic directors. In the end, it was clear this model is in the best interest of our student-athletes, programs and fans, at this time.”

This is going to be a notable change for TV (where the conference’s full rights are with ABC/ESPN/ACC Network through 2036) for several reasons. One is for the ACC championship game. That game has seen 10 of its last 11 editions of that game won by an Atlantic Division team, with those teams being Clemson (seven times) and Florida State (three times). The only Coastal Division win was Pitt’s victory over Wake Forest last year. (Technically, Clemson’s 2020 win wasn’t representing the Atlantic Division, as that pandemic-altered season saw a seeds matchup, with sudden quasi-conference member Notre Dame facing the Tigers; the Clemson win does still add to the Atlantic Division’s since-2011 dominance, though.)

During that span, too, the Coastal Division team was unranked twice and ranked #19 or lower three times. And over this span, there were three times where the team with a clear (not tied) second-best conference winning percentage was not in the championship game due to divisional alignment: 2012 (7-1 Clemson snubbed for 5-3 Georgia Tech), 2013 (7-1 Clemson snubbed for 6-2 Duke), and 2016 (7-1 Louisville snubbed for 6-2 Virginia Tech). So this change alone could make for more compelling conference championship game matchups on some occasions, and that could also have potential playoff impacts depending on how those games go.

Another significant impact from this is with the changes to opponents. On the permanent opponent front, Clemson has been the conference’s most consistent performer for the past decade, so it’s certainly notable who they’ll face each year: Florida State, Georgia Tech, and North Carolina State. There are lots of rivalry games specifically preserved too, including Florida State – Miami, North Carolina – Duke, and North Carolina – NC State. But this rotating opponent model for the remaining games means we’ll see each ACC team play every other team in the conference at least twice every four years, meaning we’ll get away from situations like Miami and Wake Forest not playing since 2013 and Duke and NC State only playing each other once every seven years.

It’s notable as well that this tweak keeps the ACC at eight conference games. Amongst the Power Five, the SEC also currently plays eight conference games, but the Pac-12, Big Ten, and Big 12 all play nine. The Pac-12 has discussed a desire to drop to eight conference games and add an “Alliance” game for each team against either a Big Ten or ACC opponent, and while the ACC hasn’t yet committed to that, keeping their conference slate at eight games in this new model makes that at least possible. (But the determining factor there may be if the Big Ten winds up on board. It’s also worth mentioning that ACC schools play a lot of football games against Notre Dame, which is a conference member for everything but football; those games are not included in the eight annual conference games here, but they’re not going away any time soon, so they have to be factored in also.)

At any rate, it’s certainly interesting that the ACC is the first conference to kill its divisions after these changes to championship game requirements. (The Big 12 already doesn’t have divisions,  but that’s as a result of their drop to 10 members when Nebraska and Colorado left following the 2010 season.) There have definitely been times where divisions and the current scheduling setup have not worked out well for the ACC. We’ll see if their new approach turns out better.