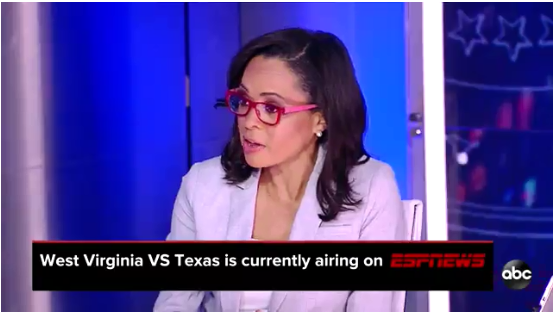 Comedian David Cross has an infamous bit about the week following 9/11 when the NFL decided to cancel football games out of respect for the situation. In the bit, Cross impersonates a football fan complaining about how “I know people lost their lives, but…pick up a goddamn football and play…I got all these snacks…”

There was more than just a kernel of truth to the joke as complaints about the lack of expected football did indeed bother some folks. The point being, anytime you get between passionate football fans and their beloved team, no matter the importance or the reason, there’s going to be some complaining.

All of which brings us to Saturday when every major news organization declared Joe Biden the 46th President of the United States. Sports absolutely take a backseat to that kind of announcement anytime it happens, but the unique situation caused by the 2020 election meant that we were seeing it come down right in the midst of a college football Saturday.

While it’s easy enough to cut away from ESPN’s College GameDay and Fox Sports’s Big Noon Kickoff without offended many people, interrupting an actual game was bound to cause some consternation.

ABC was broadcasting Saturday’s game between the Texas Longhorns and West Virginia Mountaineers in certain markets when the official announcement was made. While it’s unclear if they all did, most ABC affiliates stayed with election coverage rather than turning to the  game to cover the national news event.

UPDATE: While we originally reported that KVUE, ABC’s affiliate in Austin, Texas, changed their broadcast from the game to the election, it was actually the opposite. The local affiliate changed back to the game while other affiliates stayed with the election coverage. We apologize for the error.

KVUE, the ABC affiliate in Austin, has just flipped to the West Virginia-Texas.

For the other affiliates, the coverage stayed with ABC News for some time, to the point where they had to add a button to their coverage letting people know that the UT-WVU game had been moved to ESPNNews for the time being.

We at least live in an era where fans were left with multiple ways to watch the game in the meantime. Along with ESPNNews, they could have turned to Watch ESPN or the ESPN app on their phone to get the broadcast while they waited. But of course, we all know that a lot of local sports fans turned on ABC expecting to see their football team and, when their football team was nowhere to be found, they were not pleased. 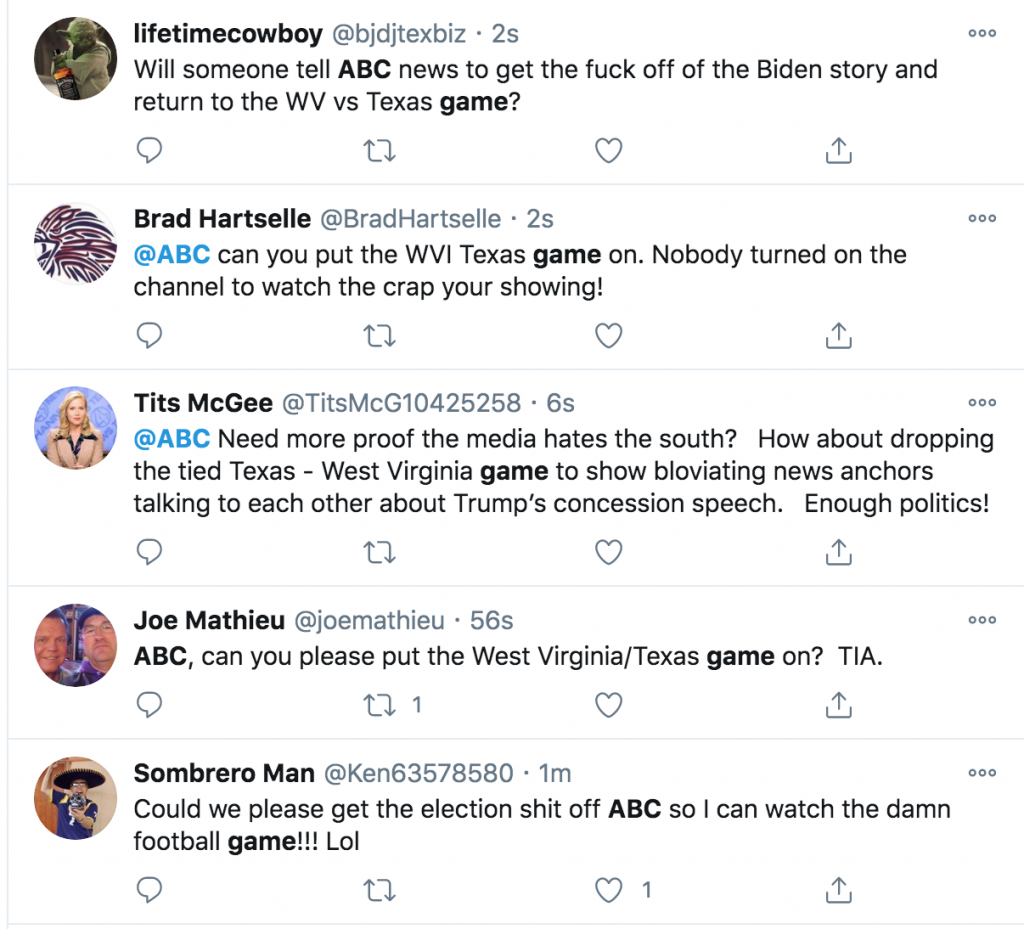 Those interested in West Virginia coverage shared their concerns as well.

I get national networks and their affiliates covering a presidential election win, and the oddity of a sitting president disputing results. But the Pittsburgh market has tons of WVU fans. The game should not have been moved off ESPNNews if it could not be placed back on ABC.

Interesting seeing the ABC affiliate in Austin, TX showing #WVvsTEX while most of the rest of the network was on #Election2020 coverage. Doubt if @WTAE did the same thing, did any WV ABC stations show the game?? Good on @KVUE for showing it being a home market to the Longhorns. https://t.co/6fqwRxk1nM

This might be raising concerns for college football fans for the rest of the day’s games. not to mention tomorrow’s NFL slate if there is more news to come, but ABC is in a different situation to, say, NBC and Fox. Unlike NBC or Fox, who can send viewers to their cable news sister channels, ABC had to make the choice to maintain their news coverage without any other place to go, hence sending the football game elsewhere. ABC is showing the Cincinnati – Houston game at 3:30 p.m. Eastern today, so depending on what kind of speeches or special announcements are ahead, fans of either team might want to familiarize themselves with the locations of all the ESPN channels just in case.

Awful Announcing has reached out to various networks to see how they plan to manage college football broadcasts given the speeches that will be coming later today. We’ll update as we know more.