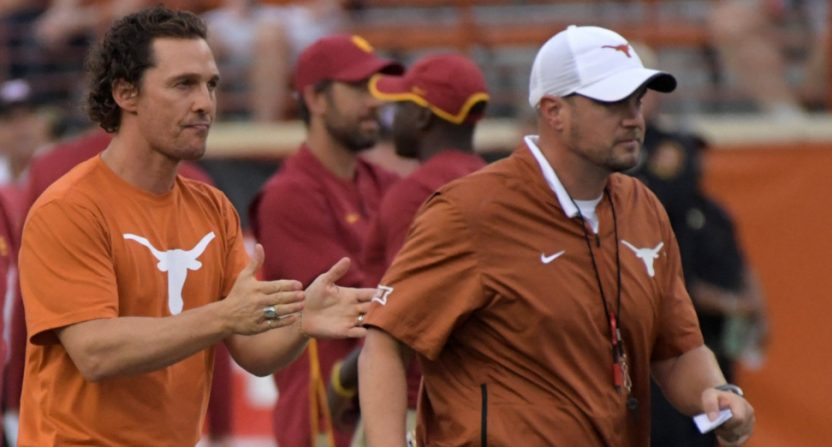 Saturday Night Football is headed back to Austin. ESPN released the first three weeks of its schedule of prime-time college football games on ABC this fall, and Week 2’s game is particularly interesting: LSU at Texas on Sept. 7. That follows Auburn versus Oregon (at the Cowboys’ AT&T Stadium in Arlington, Texas) on Aug. 31 and precedes Clemson at Syracuse on Sept. 14, and it marks the first time Saturday Night Football‘s broadcast a Texas home game since 2013, when the Longhorns were still coached by Mack Brown. They’ve even been to Syracuse more recently, last showing an Orange home game in 2014.

Here’s more from the release:

…In Week 2, ABC SNF will return to Austin, Texas, for the first time since 2013, as Texas hosts LSU on September 7 in a matchup of New Year’s Six winners from last season and a potential early season top 10 matchup. For the Tigers, the non-conference game will be their first visit to Austin since 1954 and is just the third meeting between the two schools since Texas’ victory on that date.

On one level, it’s somewhat weird that “college football’s premier weekly franchise” has been to a Syracuse home game more recently than a Texas one. But on another level, that makes sense; for all their past history, the Longhorns have been pretty miserable lately, going 8-5 in that 2013 campaign (Mack Brown announced his resignation after that), then 6-7, 6-7 and 5-7 in three years under Charlie Strong and then 7-6 in 2017, Tom Herman’s first year as head coach. For the record, though, that’s better than Syracuse’s record over that span; the Orange went 7-6, 3-9 and 4-8 in 2013-15 under Scott Shafer, then 4-8 in both 2016 and 2017 under Dino Babers. But both schools turned it on last year, with Texas going 10-4 and Syracuse posting a 10-3 mark.

The other thing to consider here is that just because Saturday Night Football hasn’t been at Longhorns’ home games, that doesn’t mean that the program hasn’t received national exposure. For one thing, the Big 12 rights are split between ESPN and Fox, and Fox has shown a lot of Texas games prominently (including a primetime home game against USC in Week 3 last year). Texas also puts two home games a year on Longhorn Network, so that’s less home games that could potentially hit the SNF slot.

Oh, and Texas has received some big slots on ESPN and ABC over the past few years, just not the Saturday night one. For example, 2016 saw the Longhorns get a primetime kickoff on ABC in Week 1 against Notre Dame, but that game was on Sunday rather than Saturday. And the previous year, they got a primetime kickoff against Notre Dame in Week 1, but that was a Notre Dame home game on NBC. So even when the Longhorns are bad, they’ve received national TV slots, just not always the Saturday ABC primetime one.

And even there, the 2013-present run is a big deviation from the norm. From its 2006 beginnings to 2012, Saturday Night Football showed 12 Texas games (albeit with some of those being split-national windows and some being road games), and last year saw them show Texas once (but in a road game at Oklahoma State). So this is a return to more of a usual standard. (It’s also an interesting matchup, as LSU and Texas haven’t played since 2003, when Mack Brown’s Longhorns beat Nick Saban’s Tigers 35-20; LSU would go on to win the BCS title that season, while Texas would win it in 2005. And the Tigers finished 10-3 last year, so this is a battle of previous 10-win teams.)

This is only part of the schedules that have been revealed so far. ESPN previously announced a Week 1 Sunday night primetime game on ABC between Houston and Oklahoma, and the ACC Network announced its schedule for the first three weeks as well. But the Saturday night schedule release is notable, and it shows what ESPN’s eyeing as top early matchups. And they certainly appear to believe that Texas is, in fact, back.