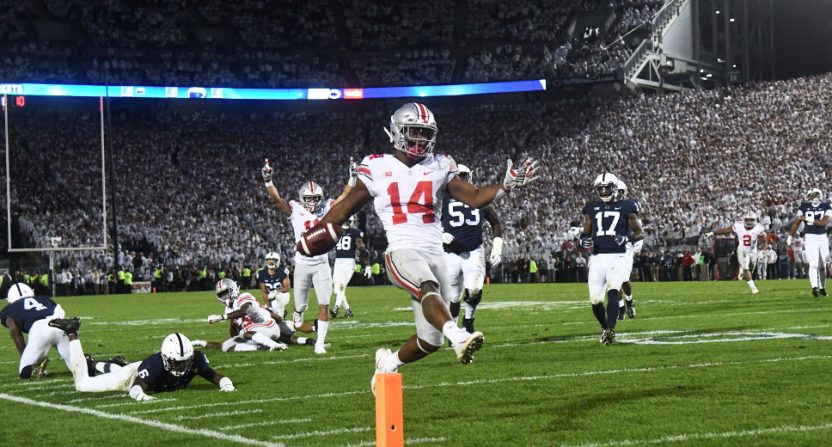 It’s been a very good college football season so far for ABC, and the ratings for their Saturday Night Football broadcast of the Ohio State-Penn State game (starting at 7:30 p.m. Eastern) saw a new high-water mark. As per ESPN, the 6.1 overnight rating for Ohio State’s 27-26 win not only was the highest college football rating on any network so far this season, it was the highest on ESPN or ABC in more than a year, and one of the top five Saturday games they’ve ever shown on ABC:

ABC’s Saturday Night Football’s strong overnight for the Buckeyes-Nittany Lions ranks among ABC’s top 5 highest-rated September Saturday games on record dating back to 2004.  Among all games on the network, the Buckeyes’ 27-26 victory is the best regular season game on ABC/ESPN in more than a calendar year, dating back to the sport’s Kickoff Weekend in 2017.

It’s also significant how much they beat the competition by. The other primetime games on broadcast TV were Stanford-Notre Dame on NBC and BYU-Washington on Fox, and as per Alex Welch of TV By The Numbers, ABC’s 8.87 million viewers not only more than doubled NBC’s 3.45 million viewers, it beat even a combination of double the NBC viewers and the Fox viewers (1.37 million).

Still, that was a decent number for NBC, up 44 percent from the fourth Notre Dame game last year (a 1.8 for an afternoon game against NC State), and a 24 percent rise over last year’s second Notre Dame primetime game (a 2.1 for Week 8’s game against USC). It’s also perhaps notable that in total viewers, Fox lost to CBS (a rerun of FBI drew 2.98 million viewers, and 48 Hours pulled in 3.70 million).

And this just added to how strong ABC’s coverage has been this season. They’ve had the two highest-rated games (the previous mark was Ohio State-TCU in Week 3, which drew a 4.9), and their tripleheader this week saw a 63 percent boost over last year. Saturday Night Football alone is up 103 percent year-over-year, while the noon Eastern game of Syracuse-Clemson drew a 3.3, 65 percent growth over last year and ABC’s best number in that slot since 2016.

Of course, it’s worth mentioning that Ohio State-Penn State did actually draw less viewers this time around than it did last year. The same game last year pulled in a 6.4 overnight for Fox, five percent higher. However, that was an afternoon game with less competition. This was a great result for ABC, especially considering that they were going head to head with another top 10-matchup, Stanford-Notre Dame. And that adds to what’s been a strong season for them so far.