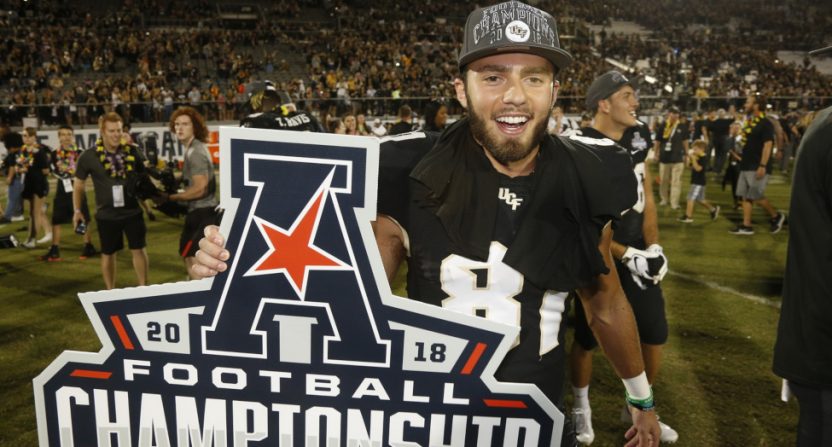 In March, the American Athletic Conference cozied up with ESPN in a long-term rights deal that left many wondering if the conference had set itself up as best it could.

The conference had wanted a grant-of-rights agreement that would lock schools in for the long term (making it so they’d have to pay substantial penalties if they chose to leave), arguing that they could get much more money that way, while top schools like UCF and Memphis wanted to keep their options open. In the end, however, the AAC signed a long-term deal without a grant of rights. But they did still managed to make a major increase in the amount of money they’re getting, which will be almost four times what it was.

The other part of the deal was that a large percentage of the sporting events included in the $1B media rights deal, including the majority of basketball games and quite a few football games, will be broadcast on ESPN+ instead of one of the networks.

For some, the deal represented a logical next step for the conference as it tries to stake its claim to a part of the lucrative college athletics media rights pie. Plus, all of the schools were due for seriously higher payouts from the previous deal. For others, it still felt like the AAC was going to be pushed to the side as a distribution filler for ESPN rather than as a valued partner.

AAC commissioner Mike Aresco spoke with Matt Murschel of the Orlando Sentinel recently in an attempt to dispel or downplay concerns that the league had not gotten a deal it was happy with. Specifically, he wanted to clarify the ESPN+ situation.

“We basically have our own branded network on ESPN+ for certain kinds of events,” Aresco said. “Where the misconception is, we are getting more games on the ESPN primary linear channels than we had in the previous deal.”

“This is an abundance of riches for people who want to watch games they couldn’t watch before,” Aresco said.

Aresco mentioned that, as part of the deal, the conference is hiring a company to produce football games and Olympic sports championships that will be broadcast on ESPN+. As for men’s and women’s basketball games and regular-season Olympic sports, production will be up to each individual school. However, part of the revenue that the new ESPN agreement provides will be used by each school to upgrade facilities, control rooms, and TV production operations.

Aresco said that the conference is still working with each member school to ensure each one is ready to go in time for 2021 when the new deal kicks into place. Once that happens, anyone with an ESPN+ subscription ($4.99/month) will be able to find an AAC content section on the site. They’ll also be able to set alerts for kickoff times and scores.

There will still be some AAC programming on ESPN’s TV networks. ESPN will air “at least 40 regular-season football games” each season, 20 of which will appear on ABC, ESPN, and ESPN2. The AAC championship game will be televised on ABC or ESPN. They’ll also air at least 65 regular-season men’s basketball games per season, 25 of which will appear on ESPN and ESPN2, while the conference championship will be on ESPN. And at least 13 women’s basketball games per season will be televised, with at least five of those featured on ESPN and ESPN2 (likely all involving UConn). The conference tournament semifinals and finals will be featured on the networks as well.