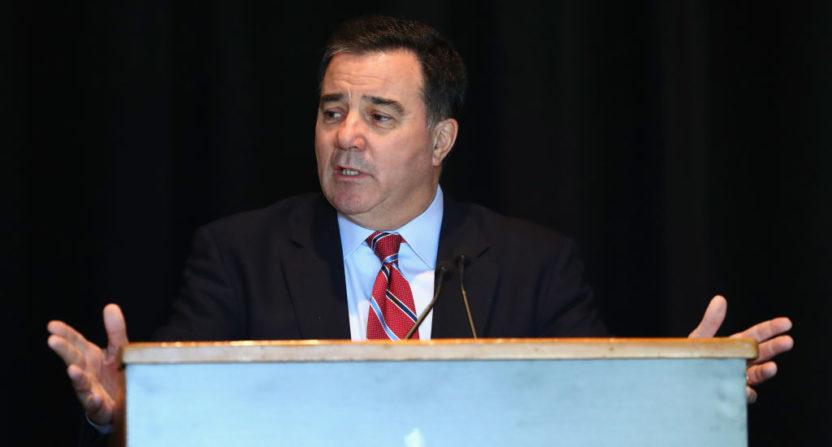 In Brooklyn over the weekend, 16 teams were whittled down to four in The Basketball Tournament, a 64-team tournament comprised of alumni teams and former college and NBA players with the winner taking $2 million. Fran Fraschilla was there to broadcast the action, which will continue with the semifinals and finals next week in Baltimore.

Fraschilla spoke to Awful Announcing about TBT, how the on-court product is different from the Big 3, seeing his sons go into coaching, Frank Ntilikina’s chances with the Knicks, and more.

Note: This interview has been edited for length and clarity

What differentiates this tournament from other summer basketball leagues?

You know what? It’s reality TV on the basketball court.

The gamut of emotions runs the spectrum, simply because there’s so much at stake. Think about it. There’s 64 teams entered into the field, and 63 of them combine to come away with no prize money. And the one champion left standing at the end of six games gets $2 million to split. So it’s great basketball in the summer because along with the stress and the pressure of what’s at stake, we’re talking about guys who inhabit these rosters that essentially are professional players.

Ninety percent of the guys left in the Super 16 played professional basketball at some level. So they’re much better players than they were in college, and the product on the court speaks to that. It’s a high level of play. It’s not the NBA, but given the drama that’s at stake because of the one-and-done nature of The Tournament, it’s fun basketball.

Why do you think people have taken to this even though it’s being played at the same timeframe as the Big 3?

I’ve only watched about 10 minutes of the Big 3, and I’m surprised they don’t have a level…I’d rather see Dr. J at 70 than some of those guys at 40. But having said that, not knowing that much about the Big 3, what makes this so much fun is simply that people can identify with players they just watched three, four, five, six, seven years ago on ESPN during the winter on college basketball. Nine of the teams left in the Super 16 are alumni teams. So they know who Brandon Triche is. They know James Southerland. They know Will Sheehey from his time at Indiana. These players are still familiar to them, and they’re still playing at a high level. And because of what’s at stake, there’s a certain passion that busts through the TV screen.

You don’t have as much time off during the summer now as you used to. What do you make of this proliferation of summer basketball leagues and tournaments going on?

In a country of 300 million people, we have a lot of basketball fans out there. So if you think about it, the college season ends, the NBA playoffs begin, the NBA season ends, the NBA Draft begins, then NBA free agency, then NBA Summer League, then the Big 3, TBT, and all of a sudden we’re on the cusp of another NBA season. So for the basketball junkie out there, this is great summer entertainment.

Your son Matt is going into the coaching business. Did you support him in his decision, and how did that choice come about?

Both of my sons [want to go into coaching]. James graduated from Oklahoma where he played, and Matt graduated from Harvard where he played. They both want to be in the coaching business. I didn’t encourage them. I think through osmosis, they’ve seen that their dad has had a fulfilling, happy life being around an orange leather ball. And they see that I love my job, whether it was the coaching or the broadcasting.

And so in retrospect, I’m not surprised that at this moment, they both want to be in the basketball business in some way. So I take it as a compliment, because they want to do what their dad did. Now that they decided to go that route, I encourage them any way I can. But if they decided to be Wall Street brokers or undertakers, I would’ve probably given them the same level of support.

I saw the recent picture on Twitter with Matt and Jay Wright as he takes a graduate assistant job at Villanova. How’d that come about for him, and if you call a ‘Nova game in November or December, how do you separate that from…

I did that for four years at Oklahoma with my son James. And it was easy. I think people recognize that my broadcasting style is to be straightforward, to be objective, to be amusing and entertaining when necessary and possible. I can only tell you that when I broadcast Oklahoma games when he was part of their team, when Oklahoma won, the other team’s fans thought I was biased. When Oklahoma lost, Sooner fans thought I was biased. Which is no different than any other game.

So it really won’t matter whether one of my sons is coaching or on a team’s bench, because I’ve made my reputation about being pretty much down the middle.

Two more questions. At what point do you start preparing for next year’s NBA Draft in terms of overseas players, and what’s that process like for you?

So I basically, I prepare for the NBA Draft like I prepare for anything else I’m assigned to. I pour my heart and soul into it, because I don’t work for a living. I have a job that allows me to do something that I’ve loved since the age of 13, which is being around the game of basketball.

Since we’re in New York, we’ll throw Knicks fans a bone. What do you think of Frank Ntilikina’s chances his rookie season and going forward?

I think because he’s going to play his entire rookie year as a 19 year old, there’s going to be an incredible adjustment for him. But I do think that by the time he’s 21 or 22, he should be an NBA starter because he’s very versatile, he’s athletic and he has a great IQ for the game. He’s been well coached since a young age.