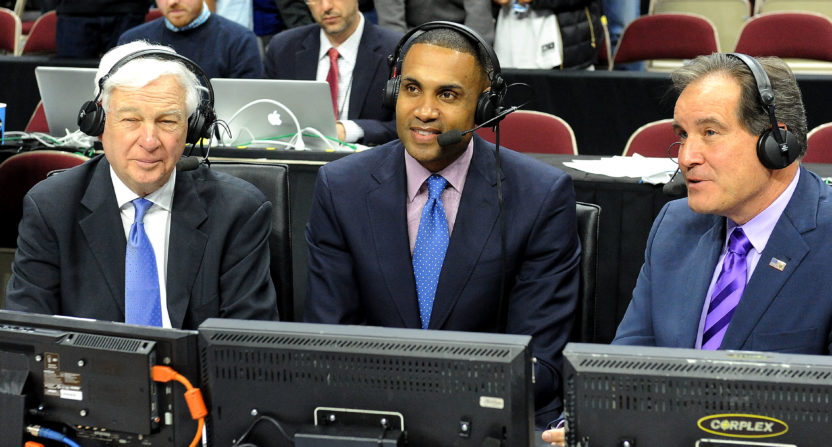 After over 10,000 votes and 52 games over the last week, our readers have spoken and graded the broadcast crews for this year’s NCAA Tournament. The results aren’t a complete surprise: The top three crews will all be calling the Sweet 16 and Elite 8 games this weekend, and they’ll be joined by the broadcast team that finished fifth.

What these results tell us is that for all the complaints about announcers during the NCAA Tournament, CBS and Turner are largely making the correct decisions, and there isn’t a whole lot they can do to improve the quality of the broadcasters calling the games. And compared to two years ago, the rankings have shifted quite a bit.

Without further ado, here are the rankings from #8 to #1, and if you’re interested, you can click here for a look at the vote totals for each crew.

Carter Blackburn and Debbie Antonelli worked together a year ago with Mike Gminski in a three-person booth, but worked as a duo this year. And while I think they did show some promise this season, there were some stumbles and dead air at times, crying out for a third person.

This trio has been together for a while, debuting in the 2015 tournament and calling games on the first weekend since. Steve Lappas is a polarizing broadcaster, and Andrew Catalon is fine, but really lacks that special something that makes him stand out. The result is a crew that is fine — just fine — and that doesn’t seem to be working its way up the pecking order any time soon.

This crew really lucked into some incredible finishes over this weekend, didn’t they? Spero Dedes continues to improve as a broadcaster, and this three-man booth took another step forward in their second NCAA Tournament together. But given how strong CBS’s lineup of play-by-play broadcasters is, it seems unlikely Dedes will ever break into the second weekend of the tournament (barring a shock departure), which is unfortunate.

This is the second year of Anderson and Webber together, and they definitely improved from a year ago. The addition of Lisa Byington as sideline reporter is also an underrated move. These three will get a pair of Sweet 16 games and an Elite 8 game this weekend, and you can’t say it’s undeserved.

It didn’t sound like Brad Nessler hadn’t called an NCAA Tournament game since 1992 this weekend, did it? Nessler, working with Steve Lavin (Ian Eagle’s partner a year ago), didn’t miss a beat working this year’s tournament after getting some reps for CBS during the regular season. It didn’t hurt that Nessler got a pair of incredible finishes (Houston-Michigan and Houston-San Diego State) in the first round, and a couple of Kansas games that were uncomfortably tight at times for the Jayhawks. He deserved a spot calling games on the tournament’s second weekend, but you can’t argue with CBS and Turner promoting Eagle and not demoting Brian Anderson’s crew.

I think it’s fitting that Nantz, the voice of the NCAA Tournament for so many years, called the first-ever #16 over #1 upset during the men’s tournament. The game itself was so historic and memorable, but really lacked that one moment we’ll remember, which was maybe the one disappointment for Nantz, Hill, and Raftery’s call of the game. Hill is also turning into a strong analyst in his own right, and Raftery is, of course, one of college basketball’s most beloved analysts. Something about this trio just works so well together, despite the three having such different personalities.

Kevin Harlan and company called six games that lacked drama, aside from Rhode Island’s overtime win over Oklahoma (kinda, sorta). This trio has been together since the 2015 tournament (the same year Nantz, Hill, and Raftery got together), and they’re running like a well-oiled machine at this point. There isn’t much else to say about these three — we all know what we’re getting, and it’s pretty damn polished and good.

Now this is a shocker. With Verne Lundquist bowing out of the NCAA Tournament this year, Eagle was promoted to his role on the #2 team alongside Jim Spanarkel and Allie LaForce. The result? A crew that is somehow better than Verne’s old unit. The remarkable thing to me is that Eagle and Spanarkel didn’t have the most exciting, most important games this weekend (unless, of course, you love the color orange), and they still did a fantastic job.

Eagle has been paired with an number of different partners in recent seasons (including Doug Gottlieb, Chris Webber, and Steve Lavin) since he and Spanarkel were split heading into the 2015 tournament, but the partnership with Spanarkel appears to be a winner that CBS should keep together for the foreseeable future.