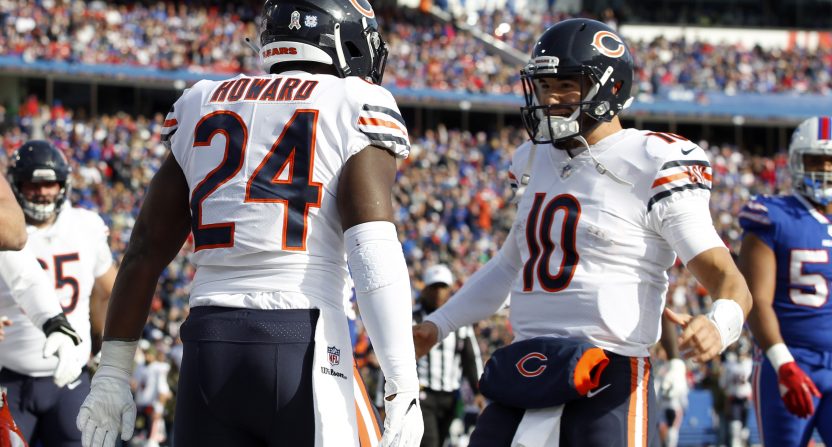 Another flex has come to the NFL, this time in Week 11. The Vikings-Bears matchup four days before Thanksgiving has been flexed into Sunday Night Football, replacing Steelers-Jaguars.

The Steelers-Jaguars game, per the NFL, will now air at 1 PM on CBS and Eagles-Saints will shift to 4:25 on Fox.

This flex makes sense from the NFL’s perspective. After all, this will be a battle for first place in the NFC North (at least for the time being), with the Bears currently topping the division at 5-3 and the Vikings following close behind at 5-3-1. Minnesota has a bye this weekend while the Bears host the Lions, meaning a Chicago loss will drop them below the Vikings in the standings and a win would give them more of a cushion in first place. It’ll be two SNF games in a row for Minnesota (barring another flex), because also they’re scheduled to face the Packers in Week 12 on NBC.

The rematch of the Steelers-Jaguars AFC Divisional game looks far less appealing in November than it did earlier this year. The Jaguars have sleepwalked their way to a 3-5 record and are looking up in the AFC South standings at the 6-3 Texans. Jacksonville has just one primetime game left on their schedule after the flex, Week 14’s TNF matchup with the Titans. After a shaky start, Pittsburgh is 5-2-1 and at the top of the AFC North. They have a Week 10 Thursday night primetime game against the Panthers three days from today, and have another Sunday Night Football game (that also seems likely to be flexed out) scheduled in Week 14 against the Raiders.

So, what other SNF games after Week 11 could be flexed? I assume Week 12 won’t be touched, since there are three Thanksgiving games that won’t be moved and both the Rams and Chiefs are on bye weeks. Week 13’s 49ers-Seahawks game should get bumped, but I’m not immediately sure what would replace it from a weak slate of games – Chargers-Steelers is probably the best game on the schedule. Similarly, as mentioned earlier, Week 14’s Steelers-Raiders game is one that NBC and the NFL probably don’t want to feature in primetime. That week also features Patriots-Dolphins, Eagles-Cowboys, and Rams-Bears, so there is no shortage of worthy replacements. I doubt Eagles-Rams in Week 15 will be bumped, and Chiefs-Seahawks in Week 16 isn’t a sexy game, but will probably be just fine to stick.

And then there’s Week 17, where the “best” game of the week will be flexed into the lone primetime slot of the week. On paper, that game clearly looks like the Panthers-Saints matchup in New Orleans, which could decide the NFC South and playoff seeding in the conference. Eagles-Redskins and Bengals-Steelers could also both have playoff implications, and there’s always the possibility that the game flexed today could also get flexed in Week 17 – yup, Bears-Vikings again.