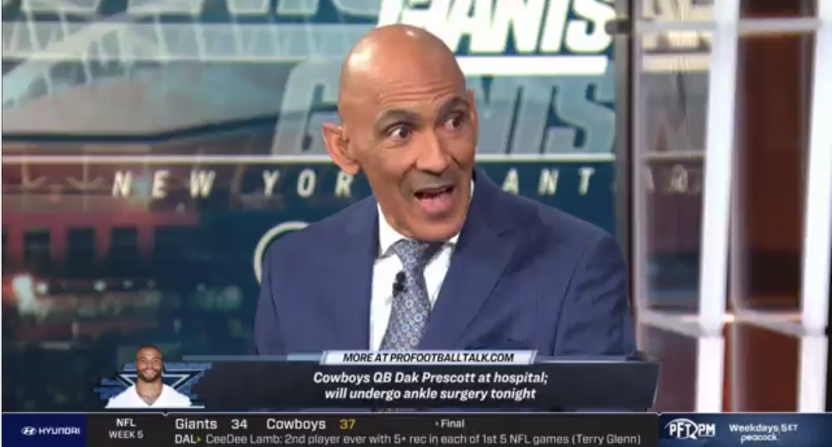 Dallas Cowboys quarterback Dak Prescott suffered a gruesome ankle injury in Sunday’s 34-31 win over the New York Giants, and was carted off the field in tears. ESPN’s Adam Schefter announced that Prescott “suffered a right ankle compound fracture and dislocation,” and will undergo surgery on Sunday night.

The former NFL head coach said, “As tough as this is for Dak Prescott, it might be a blessing in disguise for the Cowboys. They’ve got a good, veteran quarterback, who can make some plays. And this might cause them to get back to their old formula- lean on the running game, lean on Ezekiel Elliott, help that defense out by controlling the ball. You’ve still got wide receivers, and Andy Dalton’s going to make some plays with those receivers.”

Tony Dungy says that the Dak Prescott horrible injury "might be a blessing in disguise for the Cowboys."

First of all, that’s quite tasteless phrasing when it comes to a player that just suffered an absolutely brutal injury.

But it’s definitely *not* a blessing in disguise for the Cowboys. Prescott has thrown nine touchdowns this season, with four interceptions, and a 99.6 passer rating. He leads the NFL with 1,856 passing yards, is averaging 8.4 yards per attempt, and leads the NFL in completions of 20+ yards (25) and 40+ yards (six). We can debate just how good he is, but there’s no debate that he’s a very good starting quarterback, *in a quarterback’s league*.

Prescott’s replacement, Andy Dalton, is at best a back-end starter, and ideally a backup. The league certainly views Dalton more like the latter; after all, he signed a $3 million deal to be the Cowboys’ backup quarterback over the offseason.

So, even if we put aside Dungy’s poor choice of words, he’s underselling the immense value of Prescott. Yes, the Cowboys can lean more on Ezekiel Elliott and their running game, and Dalton is a capable quarterback that you can win some games with if the supporting cast is good.

But this Cowboys team is showing a lot of flaws, particularly with a defense that has allowed 160 points over their four games, or, 40 points per game over that time. They needed 40 points to beat a still-winless Atlanta Falcons team by one point in Dallas, and they needed a walk-off field goal to beat a winless, Saquon Barkley-less Giants team 37-34 on Sunday in Dallas. Sure, running the ball and “controlling the ball” as Dungy put it can help keep the opposing offense on the sidelines if the offense is able to move the chains consistently, but the goal on offense in the modern NFL is to score a lot of points and have explosive plays. And Elliott has still averaged 18 carries per game anyway, so it’s not like the Cowboys had been getting away from that with Prescott at quarterback, while also putting up big plays consistently in the passing game.

It was both a tacky thing of Dungy to say, and a bad point to top it off.

Update: Tony Dungy tweeted that “Blessing in disguise was a poor choice of words,” and he feels “very badly for Dak.”

Blessing in disguise was a poor choice of words by me. It’s not a blessing for Dak. What I meant was that for the Cowboys the season is not over. Andy Dalton is very capable and changing the focus back to Elliott could help the defense. But I feel very badly for Dak. https://t.co/MKA9TpzbKW