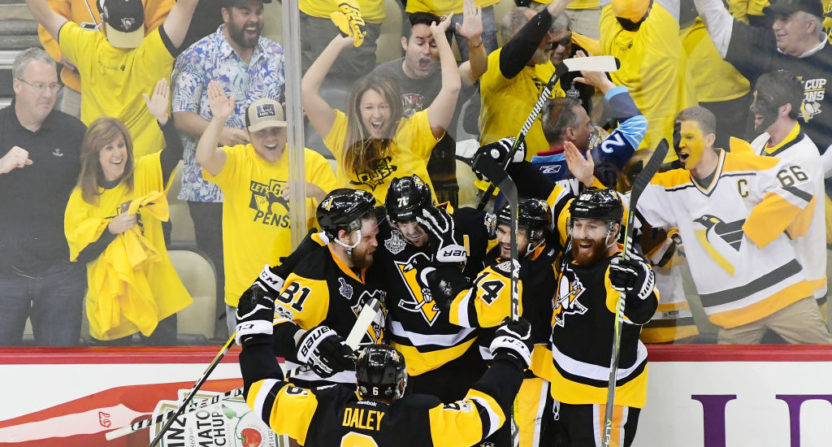 Since 2000, dating back to when ESPN/ESPN2/ABC had the rights to the NHL, two games of the Stanley Cup Final have aired on cable with the rest on broadcast television. When NBC and OLN picked up the rights in 2005, that arrangement has remained. This year, Games 2 and 3 air on NBCSN while Games 1 and 4 through 7 are on NBC.

When NBC Sports Group signed its ten-year year agreement with the NHL in 2011, it was stipulated that two Stanley Cup Final games would be on cable.

Perhaps it’s time for the entire Stanley Cup Final to be aired on broadcast television. While OLN/Versus/NBC Sports Network/NBCSN has grown to the point where it’s in over 85 million homes within three million of ESPN, NBC is available in 110 million which means when the Final goes to cable, viewership naturally goes down.

The Albany Times-Union’s Pete Dougherty quoted NBC Sports Executive Producer Sam Flood on whether the Final should be entirely on network television and he got the predicable answer:

And Flood added that people “know that NBCSN is the home of hockey,” and yes, that is true, but perhaps in the next contract, the NHL would require to have all Final games on broadcast TV.

With the other major sports leagues championship games or series are airing on broadcast TV (MLB, NBA, NFL), perhaps it’s time for the NHL to join the all-free TV party.