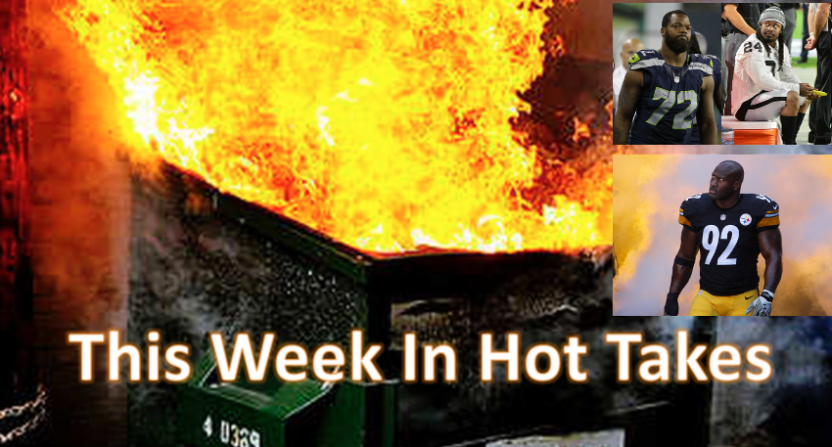 Welcome to another edition of This Week In Hot Takes, collecting the hottest takes from across the sports media world. This time around, we’re looking at takes from August 11-17. Let’s break them down.

5. Paul Finebaum wonders if Urban Meyer has won enough: With the college football season approaching, Finebaum is heating up the hot takes, and he had a particularly spicy one on Ohio State this past week:

This question can be asked…

Have the #Buckeyes won enough under Urban Meyer? https://t.co/03HI7laB2r

That’s a great ratio there, PAAWWWWLLL. And it seems pretty silly to question a coach with a 61-6 record in five years, two outright and two shared division titles (plus a third outright title that wasn’t counted thanks to sanctions), a national championship, three college football playoff appearances and a BCS berth. If that’s not “enough,” it’s hard to imagine what is.

Finebaum argues that “We’re talking about rings, not wins here,” and he complains about Ohio State only winning one national title and one Big Ten title in that span, but he even notes that they were blocked from both in 2012 despite a 12-0 record thanks to those sanctions. So Meyer had four chances to win a national title with the Buckeyes, did so in one case, made it to the playoff in two other cases, and appeared in a BCS bowl the remaining year. Yes, the question “can be asked,” as can any question, but that doesn’t make it a good one.

4. Ross Tucker conflates under contract and free agency players, says Marshawn Lynch not being cut means Colin Kaepernick isn’t blackballed: Tucker, a former player and SI/ESPN/Sporting News writer who now works for NBCSN, Sirius XM and Sports on Earth, had a rather weird take on Marshawn Lynch sitting for the national anthem:

So I guess Mark Davis has to cut Marshawn Lynch today in order to stay in accordance with the owners' secret "blackball agreement", right?

Those two things are not equal at all. Cutting an under-contract player like Lynch is a much more obvious move than just not signing a free agent like Kaepernick. There’s a reason Kaepernick wasn’t cut during last season despite his anthem protests. But teams not signing him now can claim “football reasons,” which doesn’t really work either, but is at least a bit of a smokescreen. Davis not cutting Lynch has nothing to do with if Kaepernick is being blackballed, and Tucker attempting to argue that it does is disingenuous and dumb. Mike Florio had a good shot in response at Tucker, who never hesitates to bring up his Princeton degree:

Princeton called. They want their degree back.

3. Phil Mushnick says “We’ll trade ESPN for North Korea,” questions why colleges give international athletes scholarships: Mushnick has long ranted against ESPN for such horrible crimes as starting games in primetime and celebrating dunks, and he’s at it again. This time around, he started a column by saying ESPN should be traded for North Korea:

Has the trade deadline passed? If not, I’m thinking a straight swap. We’ll trade ESPN for North Korea. Bristol, Conn., for Pyongyang and a nuclear warhead to be named later. In fact, we’ll keep the name, Later.

I admit to a certain hypocrisy about ESPN’s late Sunday night baseball, which Sunday, and perhaps into Monday morning, will be another Yankees-Red Sox game.

I try to stay awake just to see how it will butcher the telecast, the game, complicate and confuse the simple and conspicuous, split the screen, diminish the view, turn it to non-stop talk radio and otherwise attack the central nervous system. ESPN never disappoints.

Why is Mushnick so mad at ESPN this time? Well, beyond the past-his-bedtime starts, he’s annoyed that they used a small sample size stat and talked about expanding the zone.

With Mets call-up Amed Rosario batting for the first time in the game, ESPN figured that five games constitutes an MLB “career.” Thus, a graphic — ESPN’s stat graphics are produced by a cleaning crew that passes a damp cloth along the computer keyboards — we read this about Rosario:

Then play-by-play man Dan Shulman added to the hilarity with, “He’s not very selective. He will expand the zone.”

Expand the zone? What does that mean? How can he expand the zone? Did he mean swing at bad pitches? Is that like quarterbacks who “extend the play,” the new long-form nonsense for scrambling?

Uh, “expand the zone” is pretty common baseball terminology at this point, Phil. And sure, 13 at-bats aren’t a lot, and ESPN can probably be criticized for that, but 0/13 with eight strikeouts is pretty bad, so it’s understandable why they bring it up (especially with Rosario’s desire to expand the zone by swinging at pitches outside it). Amazingly, this may not have even been Mushnick’s hottest take of the week, as he also chose to rehash an old complaint about foreign-born players in the NCAA. He previously blasted Canadian basketball player Dylan Ennis, and now he’s going in on all sorts of foreigners, later in the same column where he wanted to trade ESPN for North Korea:

Your tax dollars at work: Rutgers’ 13-man basketball roster currently includes two players from Senegal, one from Portugal, another from Canada, another from the Netherlands. And two from New Jersey.

Think 39 percent of the student body is from out of the country? Or just 15 percent are from Jersey?

While our colleges are becoming prohibitively expensive for students, and while faculty and facilities suffer the crunch, as well, there is always a pile of money — much of it supplied by taxpayers — to throw at basketball and football. Priorities.

By the way, if presented as a voter referendum, how do you think “Should New York State-funded colleges recruit full-scholarship basketball players from Australia?” make out?

That’s ignoring that scholarships are actually poor compensation for what players bring in (especially for schools like Rutgers with significant media rights revenue). And Mushnick wants Rutgers to avoid the best players in order to hand out athletic scholarships to locals? They’re already bad enough! Amazingly, he brought this kind of anti-foreigner nonsense up again later in the week (as a note in an otherwise-pretty-good column about forgotten Olympic decathlon champion Milt Campbell, even if it had some needless griping about ESPN):

The state and taxpayer-funded University of Connecticut successfully has recruited punter Luke Magliozzi. He was working as a plumber near his home in Westmeadows, Australia when UConn offered him a full scholarship.

Magliozzi will be a 23-year-old freshman.

Why exactly is that bad, Phil? Should college students not be exposed to people from around the world with different life experiences? Should football programs not recruit the best players they can in the name of xenophobia? Never mind that in most cases, football players aren’t exactly taking away from the school; they’re usually bringing in revenue. Just great takes here all around.

2. John McGrath writes Michael Bennett should “walk away from football” over anthem protest: McGrath came up with one of the worst “stick to sports” takes in some time in a column for the Tacoma (Washington) News-Tribune, saying he supported Seahawks’ defensive end Michael Bennett’s push for equality, but doesn’t want him doing it during games:

Bennett’s outspoken advocacy for equality is laudable, and any reasonable person shares his loathing of segregation, riots and oppression.

But there’s a problem about this “platform” he mentioned. It’s not entirely his and his alone. From the the moment he takes the field before kickoff, and the moment he returns to locker room after the final gun, Bennett belongs to a team.

As an accomplished NFL player, he has ample opportunities to serve as a change agent preaching justice for all: Seven months during the off-season, six full days a week between August and January.

But over the three and half hours he’s competing for the Seattle Seahawks on Sundays, his ambitiously virtuous platform should be limited to the mundane matter of winning a football game.

Saying Bennett “belongs to” a team is probably not the best choice of words here, and this is a bad argument in general. First off, anthem protests happened because players’ efforts apart from when they were playing received minuscule attention and coverage. And secondly, criticizing Bennett this way is itself a political move, one supporting the status quo. Perhaps McGrath’s own platform should be limited to talking about football and not criticizing protests for social justice. Let’s see how he likes that logic applied to him.

Now this is a man I want on my team! Too bad bad we have to sit around and watch disrespectful athletes sit on coolers!! Disgraceful! ?? pic.twitter.com/W8pCsncPQV

As with comments last year, Harrison didn’t say this, and both he and team PR pointed that out. But don’t let that get in the way of your hot takes, JR:

Marshawn you should have stayed retired.

Oh, and just for good measure, he felt the need to say that a movement that started as a way to protest racial inequality has “nothing to do with color”:

I'm white – and I will not stand for the national anthem. People of color have even LESS of a reason in our racist society.

Has nothing to do w color. Stop w the color crap. It's about respect! Period. https://t.co/cuVCD4QEA7

Takes that hot are likely to melt some ice, JR.