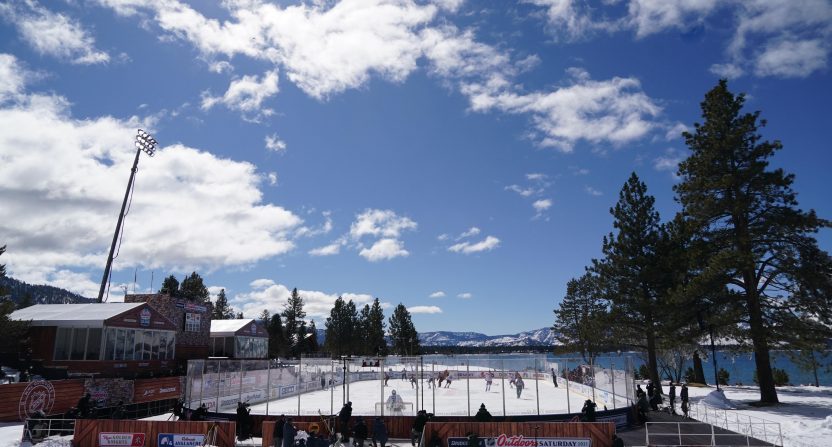 The NHL’s pair of outdoor games at Lake Tahoe received plenty of hype last week, and for good reason. The backdrop was incredible, the rink looked great, and the setting was perfect for outdoor hockey.

Unfortunately, the weather didn’t cooperate. Because of the glimmering sunshine, the condition of the ice became a problem for the NHL, the Avalanche, and the Golden Knights on Saturday. The game, which started at noon local time, was postponed after the first period, with the final two periods taking place at 9 PM local time (or midnight on the east coast) Saturday night. Furthermore, Sunday afternoon’s game between the Flyers and Bruins was pushed back from 11 AM local time (2 PM Eastern) to 4:30 PM local (7:30 PM on the east coast). The time slot shifts also resulted in network shifts, with both games moving from NBC to NBCSN.

And while this seems like an elementary point, Saturday’s postponement hurt TV viewership much more than Sunday’s.

The first period of Vegas-Colorado drew 1.356 million viewers on NBC. This would have been just fine overall (though the outdoor game bump has dissipated over the years), though Saturday afternoons on broadcast TV haven’t a typical window for the NHL this year. But then, the concerns over the ice conditions bubbled up. During the weather delay, measured from 4:30 PM ET on, the window’s viewership dropped to 992,000 viewers. We’ll never know if the ~350,000 viewers that tuned out would have stuck around had there not been a delay, or if they would have tuned back in had the game continued on in the afternoon.

When the game started back up again, viewership was fine (or hell, good) for the timeslot and network. 361,000 viewers tuned in for the final two periods on NBCSN at 9 PM local time. During the 2019-20 regular season, the NHL averaged 309,000 viewers on NBCSN. Crossing that number for two periods of a game that started at midnight on the east coast? Nothing wrong there, except when comparing that viewership to the first period viewership on NBC. A million viewers didn’t watch two-thirds of the game because of the mid-game postponement. It sucks for the league, but could have been a lot worse.

On Sunday, the postponement, with advanced notice, wasn’t a death knell. Flyers-Bruins still topped a million viewers, drawing 1.019 million on NBCSN. Again, Sunday primetime on cable isn’t a traditional window for the league, but it holds up compared to the standard Sunday afternoon games on NBC proper. The three Sunday games on NBC this year prior to this past Sunday have averaged 1.177 million viewers, and again, that’s broadcast compared to cable. Furthermore, the replacement game for Flyers-Bruins on NBC, Devils-Capitals, drew just 750,000 with a 2 PM local start. The outdoor game surely would have topped that mark had it aired in its original timeslot, but all things considered, the primetime viewership on cable was just fine.

Arguably the worst part for the league is that they have no other outdoor games scheduled for this season, with the previously scheduled Winter Classic at Target Field between the Wild and Blues getting bumped to 2022 along with the Carolina Hurricanes-hosted Stadium Series game. While the outdoor games aren’t the massive TV draws they used to be, they’re still a spectacle for both casual and diehard fans, and the league is better when those games are on the schedule.