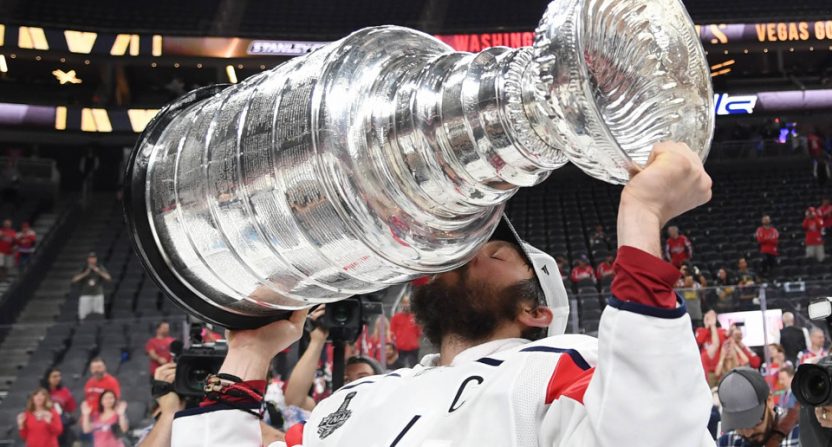 The trend of strong ratings for this year’s Stanley Cup playoffs continued through the Final, which ended Thursday with the Washington Capitals’ 4-3 win over the Vegas Golden Knights in Game 5. On Friday afternoon, NBC released numbers for Game 5 (with 6.714 million viewers in Total Audience Delivery, it was the most-watched Game 5 since 2002, up 51 percent year over year), the Final as a whole (4.918 million viewers on average, most-watched since 2015 and the most-watched without an Original Six team on record (records for that start in 1994)), and the playoffs as a whole (1.45 million viewers on average, tied for the second-best ever). And what’s perhaps most remarkable is that these numbers came despite matchups that weren’t considered particularly promising ratings-wise.

It’s been long-established that the Original Six teams (which have all been around since at least 1926, and which were the only six NHL teams between 1942 and the 1967 expansion) have been strong ratings draws, to the degree that most of these numbers are often sent out with how matchups compare to non-Original Six series. But this was a particularly weak playoffs for the Original Six, with only two of those teams (Boston and Toronto) even making it and Boston winning the first-round matchup between those teams before getting bounced by Tampa Bay in the second round.

By contrast, 2017 had five of the Original Six early on, 2016 had three (albeit with them all losing in the first round), and 2015 had four (with two making their conference championship series and one, Chicago, winning the title). And other teams that have been strong ratings draws in recent years, such as the Pittsburgh Penguins (bounced in the second round by the Capitals), also made their exits, while a Canadian team (Winnipeg) made it to a conference championship series.

The Vegas and Washington markets seemed to thoroughly embrace their teams, though, and that made a big difference. Washington is the sixth-largest TV market in the U.S., and it produced a 3.2 rating for the whole playoffs (fourth, behind Las Vegas, Pittsburgh and Buffalo) and a 25.6 for Game 5 (behind only Vegas). Las Vegas is the 40th-largest market, but plenty of people there did tune in; the 4.5 rating for the whole playoffs tied with Pittsburgh for first, and the 27.6 for Game 5 was the best metered market rating.

And perhaps the storylines around the Knights’ improbable run as an expansion team and the Capitals’ quest for the first Stanley Cup in their since-1974 history (in only their second trip ever to the Final, and in the first for captain Alex Ovechkin, who’s been with the franchise since they drafted him first overall in 2004) helped pull in neutral viewers. While Game 5 also saw great local ratings in areas near Washington (Baltimore was third with a 12.5, while Richmond was fourth with a 11.4), viewers in Buffalo (11.2), Pittsburgh (10.7), Minneapolis (7.9), and Fort Myers (6.6) all tuned in as well. Game 5 was the most-watched Game 5 since Red Wings-Hurricanes on ABC in 2002, and the Final as a whole was the best since Blackhawks-Lightning in 2015 and the best non-Original Six Final on record. And that’s even more impressive considering that it only went five games; ratings tend to build as a series progresses, and every final since 2014 had gone six games.

At any rate, these are pretty solid numbers for NBC, and they help to show how the NHL has changed in value in the U.S. historically. Soon after the 2004-05 lockout, NBC wasn’t even paying for the NHL games it showed on broadcast, with the league’s only U.S. TV revenue coming from its cable deal with the then-Outdoor Life Network (which is now NBCSN). The 10-year, $2 billion cable and broadcast contract the league signed with NBC in 2011 was a big step up, though, and was driven by ratings increases post-lockout (and by events like the Winter Classic). And it helped show where the league was heading, even if it wasn’t as big as the 12-year, $5.2 billion (Canadian; approximately $4.9 billion U.S. at the time, $4.0 billion U.S. now) deal Rogers later signed for Canadian rights in 2013.

But with the U.S. ratings continuing to be good, and continuing to bring in viewers even for matchups many might not have forecast to perform well, the NHL could potentially be in line to make even more when its contract expires after the 2020-21 season, especially if there are serious competing offers from the likes of ESPN and others. There’s a ways to go until then still, and we don’t know exactly what the TV landscape will be like in a few years, but these ratings suggest the NHL playoffs continue to be a pretty solid sporting event, even if a matchup isn’t what TV might have wanted. And that bodes well for the league’s future.